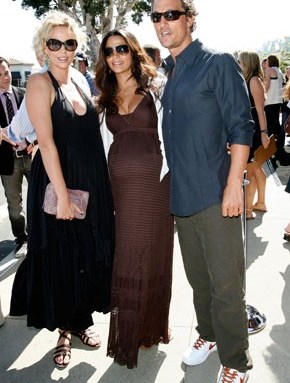 How did Charlize Theron nab a role in boyfriend Stuart Townsend’s directorial debut, “Battle in Seattle”? The old fashioned way. “She had to sleep with me,” Townsend jokedduring a Q&A following the W magazine sponsored screening at Malibu Cinemas on Sunday night.

“You’re still making me sleep with you,” Theron shot back. While she lovingly heckled him, the writer-director insisted that on set, it was all business. “She was very respectful actually. Normally she’s not. Like when I said, ‘Hey, can you do this,’ she’d just do it,” Townsend said with a laugh. “I gotta do this [directing] more often.”

Townsend added that he would “definitely” work with his real-life leading lady again, especially if she got behind the lens. “I’d like to see her direct one day. Really, she’d be amazing,” he said.

But the Balenciaga-clad actress, who has expanded into producing, nixed that idea, “No, no…I really love working with great directors,” said Theron. Including, presumably, “Hancock” director Peter Berg, who showed up on the low-key black carpet, as did her “Hancock” co-star Jason Bateman, who’s hitting his fair share of premieres for the flick. “It lets me try out this new red carpet toupee I’m wearing,” he joked. “It’s on straight, right? Awesome.”

Also in attendance: Alexis Bledel, Dita Von Teese, in a bright red Catherine Malandrino dress, and the ’Bu’s resident beach babes Matthew McConaughey and pregnant girlfriend Camilla Alves. After the film, guests headed across the street to Taverna Tony’s for cocktails and a Greek feast served family style on the patio.