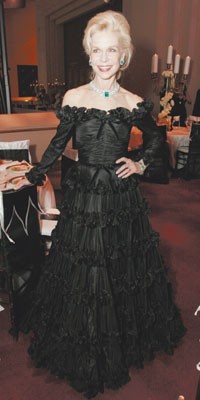 It was a scene straight out of “Out of Africa” with a dash of Beverly Hills flash, as Hollywood hunters and huntresses converged on Cartier on Monday night to fete its 25th year on Rodeo Drive and a new three-story boutique. A legion of khaki-clad, bronzer- and eyeliner-wearing male models stood at attention with 8-foot bronze torches along the sidewalk of newly named Cartier Way, while limos deposited guests.

Inside, Debra Messing flew to one of the glass vitrines, where she proceeded to try on each vintage watch for a circle of admirers, including Cartier chief executive officer and president Bernard Fornas. Meanwhile, Kristin Davis cowered in the doorway that lead to an outdoor garden, which had been transformed into an elegant Serengeti camp, complete with crystal chandeliers hanging from trees and sisal floors. A few levels up on the rooftop terrace Jocelyn Wildenstein, in full panther regalia, held court with Ben Elliott, Marisa Tomei and Todd and Katie Traina. But the friskiest jungle animals didn’t arrive until later, when new best friend trio Lindsay Lohan, Nicole Richie and Nicky Hilton shimmied in. “I think someone needs to buy me a big ring,” purred the newly blonde Lohan, who appeared to be channeling Sharon Stone circa “Basic Instinct.” But Teri Hatcher was looking for thrills of another sort, as she appeared smitten with ex-NBA star John Salley. “I mean, he’s so tall,” she gushed. Just then, special effects lightening and rain showers filled the sky as Lauryn Hill took the sandstone-covered stage. But the thunderbolts were apparently real; the pair later shared a ride to the next stop in Salley’s limo.

Last week in San Francisco, the invitation to the San Francisco Museum of Modern Art’s Modern Ball called for “fabulously modern” attire. Charlotte Schultz took the invitation to mean an off-the-shoulder fanciful ruffled Christian Lacroix gown, while Vanessa Getty opted for a strapless white vintage, below-the-knee dress trimmed in ostrich. “It’s actually very similar to the wedding dress my mother wore in the 1950s, but that was trimmed in mink,” Getty said. In more of a minimalist mood, Summer Tompkins Walker turned out in Citizen of Humanity jeans, a sparkly gold top and strappy gold Manolos. “It’s about being modern. I didn’t want to wear anything too serious,” she said.

The previous weekend in Texas, Sir Elton John headlined the Houston Grand Opera’s 50th Anniversary Golden Jubilee gala, where glitzy glamour was most definitely in. Lynn Wyatt drew her many international contacts for the event, including Sarah, The Duchess of York and Sir Roger Moore. “I knew I wanted to wear something full, so I climbed up to the attic and decided on this,” Wyatt said of her black vintage Gerard Pipart for Nina Ricci ballgown.