Beach Reads: Sloane Crosley’s ‘How Did You Get This Number’ 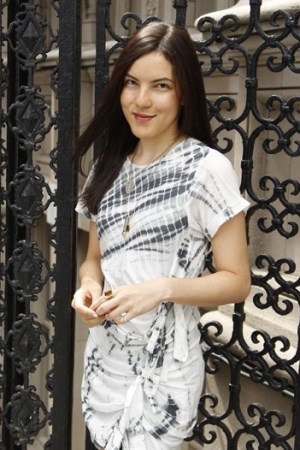 Book publicist by day, writer by night, her 2008 collection of essays, “I Was Told There’d Be Cake,” wound up on the bestseller list and is in development at HBO. Her second book, “How Did You Get This Number,” which hits stores today, was blurbed by David Sedaris and received a more or less favorable review in Sunday’s New York Times.

This story first appeared in the June 15, 2010 issue of WWD. Subscribe Today.

But Crosley, 31, has no plans to quit her day job at Random House’s Vintage imprint. After all, the advance on her first book, she says, was just enough for her to afford a Givenchy Pumpkin bag, with some change leftover. And she’s acutely aware of the mercurial nature of her chosen career. “A lot of writers forget you’re a volunteer — no one needs you to do this,” she says. “They need you to help scrape oil off a pelican. They don’t need you to create a cute little essay about yourself.”

In “How Did You Get This Number,” Crosley, a graduate of Connecticut College who grew up in White Plains, N.Y., recalls mishaps such as being alone in Lisbon, lost and unable to speak Portuguese, and befriending a clutch of clowns-in-training. There were also the times she saw a baby bear get killed in Alaska and was shuffled through airport security in Paris in a ripped, mercury-covered shirt.

“The closer you get to the heart of who you are, the more nerve-racking it is, but the funnier it can be,” Crosley says. “But you just have to decide if what you’re doing is worth the price of admission. With this book, I am kind of excited because I always felt like a guest star in the narrative nonfiction world, and now I feel like I can take my coat off, kick my feet up and stay awhile.”

There was one topic her editors thought was missing from the original draft — romance. “I feel like when you’re a woman and you pick up a pen, things are going to be grouped and reviewed as chick lit without you even trying, so I didn’t particularly want to try,” she says. “I don’t think confession leads to some sort of literary absolution and you’ve written a good piece of work just because you’ve told someone everything you know. ”

What are a few things Crosley knows? “You should never wear anything you can’t afford to lose.” “Part of becoming an adult is accepting our parents’ illogical behaviors just as they used to accept ours.” And when it comes to spend-now shopping: “This means you irrationally mortgage what little logic you own to pay for this one thing. This relationship is an impulse buy, and you’ll figure out if it’s worth it later.”

Crosley is poised to learn a little more as she hits the road for an 11-city book tour, beginning with a party tonight at The Spotted Pig. The trip will eat up her Random House vacation time, but, for the writer, there is a bright side. “Then you go to a hotel room you’ve never been in, bounce up and down on the beds, steal the mints and it’s very exciting,” Crosley says. “Authors, maybe we just have a different set of standards than rock stars.”