BG throws a lavish party for Madonna's book on Kabbalah. 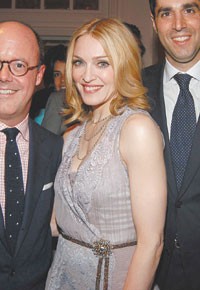 NEW YORK — Bergdorf Goodman was transformed into FAO Schwartz Tuesday night when it hosted a lavish party for Madonna’s fifth Kabbalah-inflected children’s book, “Lotsa de Casha,” complete with paper flower-garlanded chandeliers, costumed jugglers dressed like characters from the book and miniature cupcakes. Plenty of Madonna fans could be found on the red carpet, including those too young to remember her “Sex” book days.

The Material Girl arrived just moments later and admitted that while the protagonist of her latest book learns to find happiness by eschewing earthly possessions, her own daughter, Lourdes, is well on her way to becoming a fashionista. “She has better style than I do!” said her mother. “Her favorite designers are Dolce & Gabbana, Miu Miu and Prada. She lives in my closet.” What about rumors of an upcoming perfume project? “Shh … ,” she mimed, as a hair stylist and makeup artist, bogged down with products, looked on, ready to jump in with a touch-up.

Meanwhile, down the street, a different sort of book party was taking place.

“I love a girl who wears fur in June,” Andre Leon Talley boomed to Carol Alt as the photographers went snap, snap, snap. He was holding court at La Grenouille, where MAC’s John Demsey was hosting a party to celebrate the publication of Talley’s new coffee-table book, “A.L.T. 365+.”

In walked the makeup artist Pat McGrath. “Girl, you are in the book, big time!” Talley said. “Big Toyyyymmme!”

“Spencer,” he snapped to a bespectacled young photographer a minute later, “stop shooting me. Go get the guests.”

Recently, Talley has gotten used to being behind the lens himself. Thanks to an endless supply of disposable cameras and inspiration from his late benefactor, Andy Warhol, his new book has candid shots of almost everyone in fashion — among them, his boss, Vogue editor in chief Anna Wintour; his designer pals Diane von Furstenberg, Oscar de la Renta and Zac Posen; pop music’s comeback du jour, Mariah Carey, and the social fixture Cornelia Guest, all of whom were in attendance. Later, a small dinner was held upstairs attended by Talley, Wintour, Guest, Carey, Demsey and Francisco Costa, among others.

Said Sandra Bernhard, who was sitting in the back wearing a printed Marni top and a denim skirt from Marc Jacobs: “He’s like a wind that blows off the Sahara and carries everything away with him.”

And Iman, who has known him since she became a model in the late Seventies, recalled, “He was the only guest at my wedding who arrived with more luggage than me.”

Of course he was.