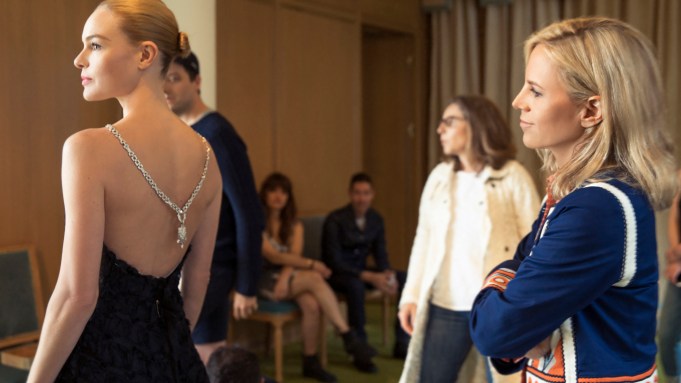 On Saturday afternoon, two days before the Met Gala, Kate Bosworth was standing in front of her custom-made gown in Tory Burch’s Flatiron showroom, seeing the final product for the first time.

“We all sort of knew where it was going, but to see it in the flesh is very exciting,” she said.

Burch and Bosworth, who have known each other for years and most recently have worked together on Burch’s Embrace Ambition campaign, joined together to create a black strapless gown with an accompanying shrug, with 3-D spherical embellishments in an homage to Rei Kawakubo’s work.

“It was an interesting theme, because Rei is such an iconic genius and individual,” Burch said. “I think doing black was a wonderful take on that, with the fabric manipulation. I think so many designers are inspired by Comme des Garçons — there is no one more iconic from an inspiration standpoint. The fabrics and materials and, obviously, the proportions.”

“For the Met, I suppose I always approach it with the designer who is being honored — not so much taking it literally but in acknowledgement to honor their work,” Bosworth explained. “Because I’m a very visual person, I put together a couple of mood board-type documents and I sent them to Tory and her team. It was very organic.”

The two began work on the dress a few months ago. “I remember meeting you, and I don’t know if you remember this because we’ve never talked about it, but in Tulum,” Burch told Bosworth. “Someone was a mutual friend, and we were in this incredible lunch restaurant.”

“I have so much admiration for Tory and everything she’s done,” Bosworth said. “The focus that she has and discipline, and also the warmth and groundedness – it’s everything that I related to and want to learn from.”

“We don’t dress a ton of people, we just dress people we really admire,” Burch said. “I feel the same way,” Bosworth told her. “I send her love letters. I’m, like, ‘Don’t think I’m stalking you!’”

The two stressed that the dress was a very organic, collaborative process. “She had really specific ideas,” Burch said of Bosworth. “She mentioned black, and I loved the idea.” The color is a rarity for Bosworth to wear, but she found it fitting to the Costume Institute’s theme.

“I thought that the idea of black for this was appropriate because [Kawakubo] uses so much black and it felt very Comme des Garçons,” she said. “Tory and I talked a lot about the idea of the dots, which I’m sure will be represented across the board at the Met…but to not take it so literally. I thought that Tory had such a great idea of bringing the dots in as an almost architectural sphere.”

The accompanying shrug allowed for some variation in the overall look as the night went on. “I think that’s the fun thing about the Met,” Bosworth said. “You kind of go along with the adventure of the night.”