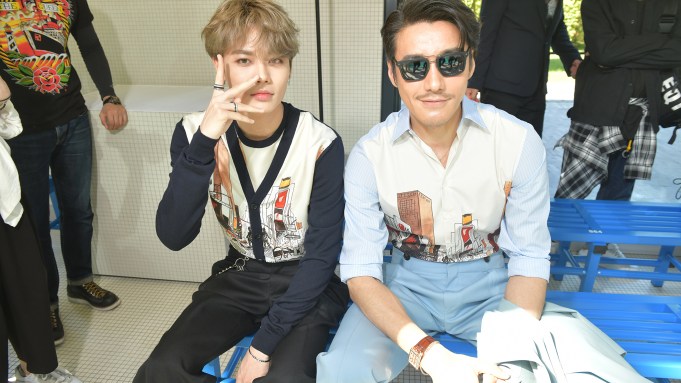 TAKE THE PLUNGE: Given the stifling heat, it was a wonder none of the guests were tempted to dive right in to the historic Pailleron swimming pool, one of Paris’ hidden treasures and the setting for the Lanvin show on Sunday morning.

Dressed in a cloth cap and duffle coat, Ben Harper may not have been suitably attired for the setting, but it was not to be missed: His son Ellery, a month shy of his 18th birthday, was walking the show.

Attending with his wife Jaclyn Matfus, Harper has just completed a tour of the Southern Hemisphere, so perhaps was acclimatized for the heatwave gripping Paris. “I was just over in South Africa, it was amazing. I was doing music, touring, in Soweto, Cape Town, Pretoria and Reunion Island.”

Singer and actress Inna Modja was tempted to dive in. “With the heat, you almost want to take a dip,” she admitted.

Modja recently wrapped a UN-backed documentary on climate change with Fernando Meirelles, the director of “City of God,” taking her to Senegal and Ethiopia.

“I’ve been a climate change campaigner for about 10 years, and I’m so pleased that there has been a change in mentalities and things finally seem to be moving forward,” she said. An album to accompany the film as well as two movies will also be out later in the year.