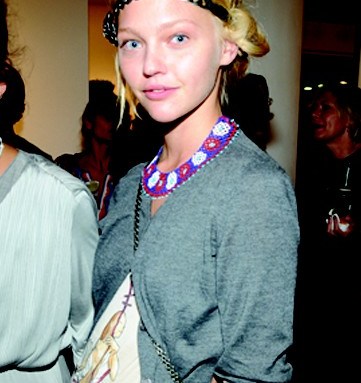 Photographer Ben Watts opened his show “Big Up” at Milk Gallery Tuesday night where models, jocks and music fans crowded the Meatpacking District space, swigging beers and dancing to salsa music. (For those who don’t know, the phrase “big up” is the Jamaican equivalent of “mad props.”)

Upstairs, Watts’ VIP friends—Sean Avery, Maxwell, Damon Dash, Angela Lindvall, Joshua Jackson—enjoyed a sedate candlelit meal. But the man of the hour was most excited to welcome his family, including mom Miv, who lives in England, and pregnant sis Naomi. “We don’t get to see each other very much,” Ben Watts said. “We live in different corners of the world.”

Maybe so, but the siblings seemed to easily regress to childishly ribbing each other. As Naomi discussed the difficulties of trying to pose seductively while being photographed by your brother, Ben came up and playfully nudged her. “What are you saying,” he teased. “Ugh, oh my god.”