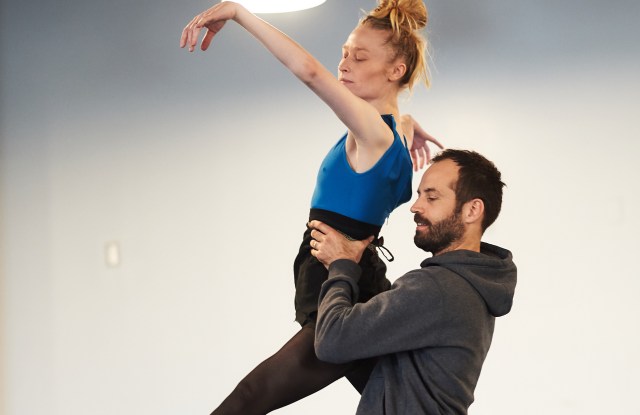 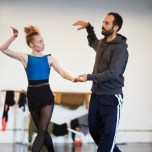 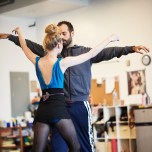 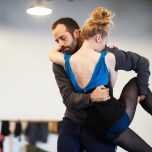 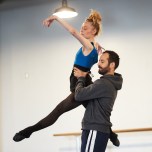 Since founding L.A. Dance Project in 2012, Benjamin Millepied has taken the company around the world but this weekend the 10-member troupe will finally return to Los Angeles for a two-night run at their home base of The Theatre at Ace Hotel DTLA.

The performance starting Friday is notable for another reason: The four-piece program includes the world premiere of “Homecoming,” choreographed and danced by Millepied with music composed and performed live by Rufus Wainwright.

Millepied’s partner will be Janie Taylor, the former New York City Ballet principal who was also his partner there and who joined LADP in January, along with her husband, ballet master Sébastien Marcovici.

“I fell in love with Rufus’ songs years ago and I wanted to make a much longer work with these songs,” says Millepied, who performed a one-night-only pas de deux with Taylor at last year’s LADP benefit that offered a taste of what’s to come. “Janie is one of my favorite partners. To me she is more than a dancer; she and Sébastien are like true partners and now we are creating the company that we dream of.”

Says Taylor, “At the time Benjamin made this ballet we had both ‘retired’ from the stage. But I think it’s always hard for a dancer to stop dancing. I miss being lifted up all the time.”

Of joining LADP, she notes, “I’ve watched this company for a few years now, and the dancers here are amazing movers and very individual and work together really well. I’m looking forward to putting down roots here.” Taylor has also taken up costume design, and her work appears in “II Acts for the Blind.”

Millepied says his goal, now that he’s back in Los Angeles full-time (he exited his post as director of dance for the Paris Opera Ballet earlier this year, allowing him to spend more time in L.A. with his company and wife Natalie Portman), is to “be present for the community and spend more time creating performances.”

Sadly for fans of his dancing, he says this weekend will likely mark the last time he performs. “I’m OK with that; there’s much more work to do,” he says.

That includes presenting more classical works in addition to his own dances and those by Roy Assaf, who choreographed ‘”II Acts for the Blind” and Christopher Wheeldon, whose “After the Rain” pas de deux will be performed this weekend by former Pacific Northwest Ballet principal and LADP associate director Carla Körbes.

The fourth ballet in the program is Millepied’s “On the Other Side,” set to a suite of piano etudes by Philip Glass; with costumes by Alessandro Sartori, Berluti’s former creative director who now is creative director at Ermenegildo Zegna, and art by Los Angeles-based Mark Bradford.

“That ballet is an ode to a generation of friends of mine who have all grown up with me. When I founded LADP, people complained I didn’t hire dancers who were only from L.A., but three years later we all now have identities as people living in this specific urban community,” Millepied says.

The company still performs with the LUMA Foundation in Arles, France for five weeks each summer, and recently signed a yearly two-week partnership with the Joyce Theater in New York.

Millepied says that LADP will launch its own digital platform next spring that will include a dance-focused magazine and virtual workouts and classes.

“It’s a significant project for us. The magazine will be a platform for dance films, photography archives and writing, and the application we are developing for classes will allow people to interact with the dancers personally,” he reveals.

The platform is a joint venture with BETC agency, and Millepied says it was inspired by the digital initiative he launched at Paris Opera. “We are committed to projects that are outside the box. That’s why we go big,” he says.

There is one area where he’d like to go small, though. “I’d love to one day have a more intimate home venue where people can interact and you can perform with the audience surrounding the stage,” he says.