PARIS — Dance choreographer Benjamin Millepied is not one to sugarcoat a storyline. To start with, for anyone with romantic notions about what it’s like to run an arts center — the L.A. Dance Project, in his case — he’ll quickly set you straight.

“It’s mission impossible,” he says, referring to financial challenges. Government support for the arts is dwindling in the political climate, while a growing sense of urgency around social inequality and environmental issues has made it harder to secure private funds in other areas.

Millepied, in a crisp, white shirt, his youthful face framed by a trimly cut beard, spoke to WWD from a sofa tucked behind displays of chunky, Renaissance-inspired high jewelry sets from Van Cleef & Arpels. The jeweler had outfitted a hall just off the Place Vendôme to evoke a plush, Italian courtyard for its “Romeo and Juliet” theme, with colorful, floor-to-ceiling balcony scenes drawn by Lorenzo Mattotti, while Millepied’s dancers were projected on a screen in black and white.

“It’s hard. It’s hard for me, which means it’s also impossible for others,” he says, mindful of his unusual position as a choreographer with a renown that extends beyond the dance world. Building a reputation as a star dancer and choreographer at the New York City Ballet starting in the Nineties, Millepied broadened his fame with a role in the 2010 film “Black Swan.” A short stint at the head of the Paris Opera Ballet added further international dimension to his career; he is also known for being married to Hollywood star Natalie Portman.

“People are less likely to give to the arts, to be honest, because they want to give to the ACLU [American Civil Liberties Union], and the environment and poverty — so it’s tricky,” he says. Which is another reason he is thankful for ongoing support from Van Cleef & Arpels — collaboration with the house dates back several years — he added, noting that the French capital was perhaps not the best place to make this point.

“People don’t really think about it because it’s still Paris, center of the arts in Europe and there’s so much culture, and people come and there’s still a tradition of it — you still have bookstores in the city,” he notes, with a touch of irony.

The struggle for U.S. arts organizations to cope with economic pressures doesn’t always lead to “the best decisions in terms of the art that you produce,” he adds.

“I think what I’m trying to do with my company is to really showcase relevant and important opportunities for artists without worrying about what the attendance is — that the place exists and it’s there and people will want to see it and hopefully new people will come. Also, giving access to the arts to new communities,” he adds.

With his Romeo and Juliet production, which comes to Paris next spring, Millepied tackled the age-old classic as a sort of update — telling the tale with various characters. Two women or two men, while mixing elements of film into the ballet performance, constantly rotating the cast and putting them in modern settings. It’s an old-fashioned story that he sought to boil down to its essence.

“Romeo and Juliet — in love in a world that makes love impossible,” he says. Although mixing genders isn’t exactly new, he points out with a chuckle — Shakespeare had men playing women.

It is difficult for luxury companies to relay a sense of authenticity when it comes to collaborations in an era that has spawned sponsored endorsements on social media and a never-ending stream of celebrity enlistments. Millepied notes the jewelry house and its chief executive officer Nicolas Bos — who is also creative director — holds a long-term view.

Ties between Van Cleef & Arpels and ballet date back to one of the brand’s staples — gem-encrusted ballerina brooches, which Louis Arpels, an avid ballet and opera fan, began making in the Forties. A meeting between his nephew Claude Arpels and New York City Ballet founder George Balanchine resulted in the three-part “Jewels” ballet in 1967; the house brought it back to the London Royal Ballet 40 years later. Millepied, too, has drawn up a “Gems” trilogy, winding it up with “On the Other Side,” an ode to emeralds, in 2016.

“Nicolas [Bos] is not one for throwing names for the sake of having names — he thinks of the long-term story and how artists come to inspire the jewelry that is made, so it’s really special and real,” he says.

The way Bos and Millepied tell it, the Romeo and Juliet collaboration grew out of a mutual interest in revisiting the age-old tale of frustrated love.

“Like all projects we’ve done together with Van Cleef, they start with a common desire and often, I think, that’s why we’ve collaborated so many times,” says Millepied, noting their common interest with “certain stories and certain ideas” also comes on a cultural level that spans dance, contemporary art and gems.

“Romeo and Juliet has been done over and over so I was interested in the score — the Prokofiev score — with a kind of new approach to it,” says Millepied, noting he preferred not to do a “classically staged” version.

“As I listen more to the music, the images I had were not only images for the stage, but images for film,” he says.

“I found it easier for me to tell certain aspects of this narrative through film versus stage, and so I started to think about a production that would include live performance — [what] I would call live cinema, which is more than the idea of live, raw video as we know it for the stage — but to aesthetically try to create an image that would be closer to a cinematic image, in terms of lighting, in terms of quality.”

While some of the dancing takes place on stage, there are times when a live camera is on stage, as well as moments when the dancers move beyond the stage, he explains. “It’s quite magical, because it’s live and then you end up having a more realistic environment.”

“If Tybalt is getting killed, you’re not just seeing a dancer on the stage, you see him in a more cinematic fashion, in the offices of the building or somewhere or an industrial area, and you’re closer to the character,” he says. At times, a musical score can illustrate images better than a live performance, in his view.

Millepied is also directing a movie for the first time — a modern, musical and dance adaptation of “Carmen” for the big screen, with filming set to start in January. Asked if the film marks a shift in his choice of medium for telling stories, he explains that he sees himself continuously moving between dance, film and photography. 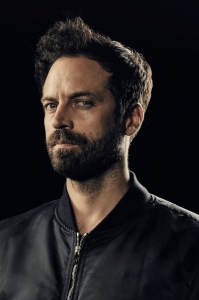 He rejects the idea that his use of photography might reflect the rising obsession with images among current generations.

Opting for film cameras, rather than digital, he says, allows him to “take the time to observe the world and make a decision about what I photographed and how I’m photographing.”

Does classic storytelling through a ballet performance on a stage hold less relevance nowadays?

“I don’t think about it as irrelevant for me. It’s not whether I’m trying to be new or this or that, I always just approach it from the perspective of the score and the narrative and finding the way to be most true to the score and to make it work and create something that really…makes it a total work of art.

“Being able to shoot live with no delay is something new, so we do have those tools now and I use them. That’s awesome,” he adds.

While his pieces include moments he describes as “very classic” — perhaps reflecting his training — he also sees tension with some of the more traditional sides of ballet and how they appear in a context of heated gender discussions.

“Ballet is very old-fashioned, women are en pointe and it’s kind of a question today,” he says. So, too, he adds, is the idea of “putting women on a pedestal” and depicting them as a “fragile girl.”

His Carmen film project, he suggests, fits his interest in going deeply into a topic.

“In the end, it’s for very personal reasons — you dive into a subject for a long period of time, get to know it inside-out and there’s a kind of clarity and depth to the reason why you’re doing something,” he says.

“Even with my dance project, I like to take a lot of time to do my work,” he adds.

“It really pays off, because if you like a score and you just make a ballet in three weeks, there can be very deep resonance to work, but when you dive into a subject, you make a work because…there’s a satisfaction to going all the way — you know, it’s like writing a book or something, I would imagine that’s quite wonderful.”

Despite the current, divisive political environment, Millepied says he sees reason for optimism.

“I feel like we’re more and more confronted with reality — as bad as it is to have [Donald] Trump as president, it has people more involved in social issues…and it forces you to be a part of it in a way that’s actually really healthy,” he says.

“Inequality is a really big deal, obviously the environment, how you lead your daily life in terms of consuming,” he adds. “Of course all of these things inform your thoughts and ideas and how you want to live in this world and…it seems like there’s so much of the art that’s being made which relates to this time.”

He refers to Rebecca Solnit’s “Hope in the Dark.”

“This idea that a lot of the great advancements and thoughts and new ideas came from very dark moments in history — it feels like this moment is generating a lot of expression, which is great.”