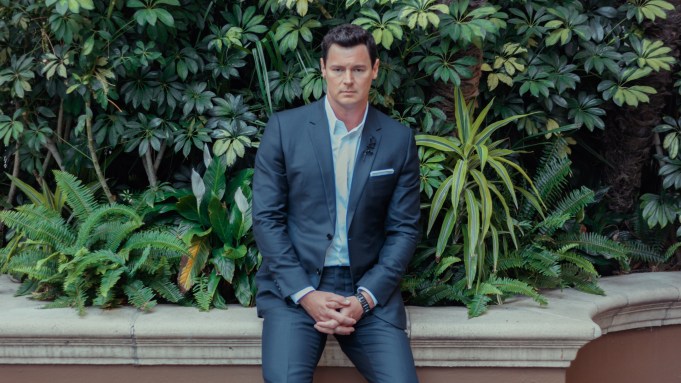 “I approach fashion like an actor,” says Benjamin Walker. “What story does this tell about me? What do I know about the story of the designer?”

The actor is in a T-shirt early on Monday afternoon, a few hours shy of changing into a Dior suit for the first “Lord of the Rings: The Rings of Power” premiere in Los Angeles. Walker, who stars in the much-anticipated Amazon series as Elven-king Gil-galad, is working with styling team Zadrian + Sarah to curate his red carpet looks for the project’s multicity premiere rollout.

“Gil-galad in the show has this kind of golden corset. And when you put that on you can’t help but stand up straight and almost levitate, like an elf,” says Walker. “The same is true for a good suit.”

He notes that his Dior look hit the cross-section of sophistication and functionality, while paying subtle homage to his character. “The details have been paid attention to. It has this gorgeous black flower broach on the lapel,” he adds. “It’s a bit of an homage to Gil-galad and Dior. But it just works and it hearkens back to classic movie stars. The suit’s not wearing me, we’re kind of dancing together. My barometer of what I wear is that: Do I feel good in it? Does it look good? And can I dance?”

Walker had already screened the show’s first three episodes ahead of the premiere, and promises that fans won’t be disappointed with the series. Amazon has banked on the same; a second season is already underway.

“It’s genuinely incredible,” he says. “My first impression was, man, I gotta get a bigger television. It’s epic,” he adds. “We spent so much time away from our families and away from our home and places of comfort that for it to turn out so well, it was really gratifying and I’m really proud of everybody [involved].”

The real test, however, will be what the fans think when the show comes out on Sept. 2. The fandom for author J.R.R. Tolkien’s work runs deep; Walker recounts a Tolkien expert luncheon during Comic-Con where the crowd’s knowledge of Tolkien’s fantasy world was unrivaled.

“People ask me a lot ‘does the pressure bother you?’ And I don’t mind the pressure; the pressure’s how you make a diamond,” he says of the lead-up to the show’s wide release. “There is a level of respect that Tolkien demands and that the fans demand. And that’s part of the frustration of them not having seen it yet. You want to say, trust me, we’ve done it justice. You’re gonna be happy.”

Before getting red carpet ready, Walker planned to ground himself in the real world.

“I’m going to read the newspaper. I like to have perspective. It’s very easy to get nervous,” he says. “So I like to remind myself of what’s going on in the world and how we fit into it at large. It calms me and centers me, and then I can talk to people and feel informed, and have context for what we’re doing.”