The social world came, coiffed and gleaming, to the International Fine Arts and Antique Dealers Show at the Armory on Park Avenue Thursday night. 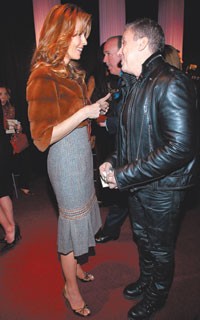 NEW YORK — The social world came, coiffed and gleaming with nary a hair nor a wrinkle out of place, to the International Fine Arts and Antique Dealers Show at the Armory on Park Avenue Thursday night for Memorial Sloan-Kettering. Julia and David Koch bought some Narwhal tusks, while the new Duke of Devonshire splurged on an 18th-century English side chair. Koch looked resplendent in a tweed number from Carolina Herrera, Nina Griscom shimmered in Prada and everyone agreed it was a good year. “It’s very exciting, very interesting,” said dealer Ariane Dandois, in from Paris with daughter Ondine de Rothschild, as she scanned the room, which also included Lily Safra, Anne Grauso, Minnie Mortimer, Jamee Gregory and Calvin Klein.

Earlier in the day, the endlessly energetic Griscom put in an appearance at a luncheon for the committee of the New York City Ballet’s Opening Night benefit. NYCB star Albert Evans charmed the members, including Alba Clemente, Fé Fendi and Charlotte Moss, with a special preview of his ballet, which will premiere at the gala on Nov. 22. He wasn’t the only one turning on the charm, though. An unsuspecting Chris Wheeldon walked into the studio to begin his rehearsal, but was more than happy to dispense kisses to the ladies. “I had no idea you were all here,” he cried. “I just walked in and saw what a beautiful room I missed.” And Peter Martins halted rehearsals with the corps de ballet next door to hug everyone before the group trooped upstairs for shrimp salads and nibbles of miniature cookies.