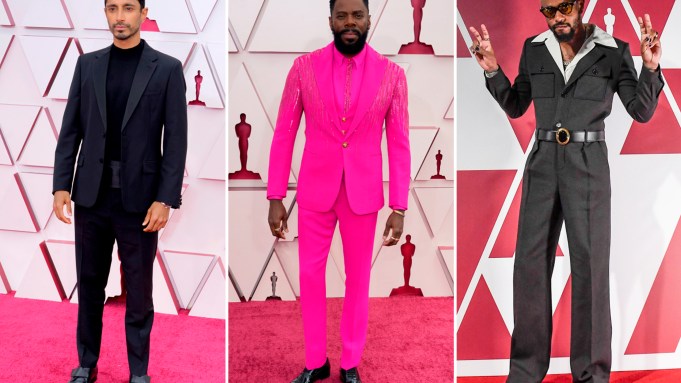 Over the course of this awards season, men have completely reconsidered what black tie means. Bold colors, turtlenecks and new silhouettes have taken over from the traditional evening dress codes. Here are the new red carpet rule makers:

LaKeith Stanfield, Zooming in from London where he’s filming the third season of FX show “Atlanta,” wore an impeccably tailored Saint Laurent jumpsuit — a high note from an actor who never disappoints on the red carpet.

Proving that simple black still can be current and innovative, Riz Ahmed’s Prada turtleneck look was a chic nod to the 1960s mod of his native London. We like the idea of holding onto the tuxedo cummerbund, but pairing it with a sweater rather than a jacket. His best move of the night, however, was his internet-breaking gallantry toward his new wife, Fatima Farheen Mirza, on the red carpet.

In one of the most head-turning looks of the night, Colman Domingo‘s three-piece bright pink tuxedo with embellished sequin details by Versace embodied the most singular trend of the season: go bold or log off. He sets the bar high for future red carpets, always prioritizing self-expression and having fun with fashion.

After many standout looks this season, Leslie Odom Jr. wrapped things up in a metallic double-breasted Brioni suit. Riding on the gold trend of the night, Odom Jr. took a calculated risk and it paid off. We appreciated his commitment to the layered turtleneck, a look he also executed expertly at the Golden Globes.

The only nominee to really go traditional in a black three-piece tuxedo, Steven Yeun looked incredibly sleek thanks to the perfectly tailored Gucci silhouette. And the smaller droopy bowtie was a modern touch.

And last but not least, Alan Kim proved fun style has no age limit in his mini Thom Browne look.

We hope the men’s wear boom continues into next season.

Oscars 2021: See All the Award Winners