Bloomingdale was a member of a tightly knit group of impeccably dressed rich women based in California, but from the beginning, she stood out from the crowd. 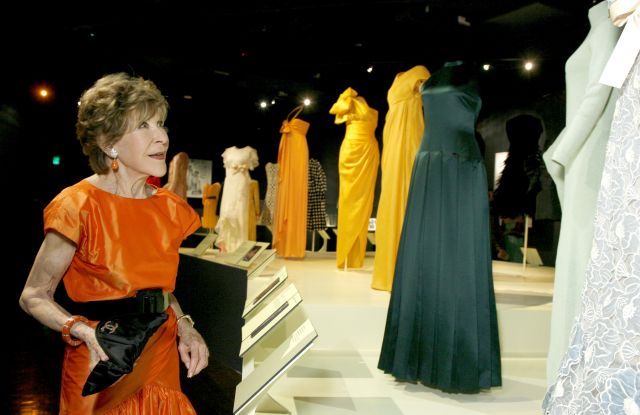 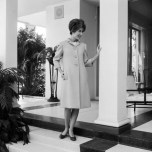 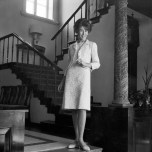 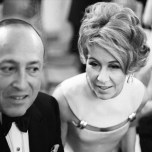 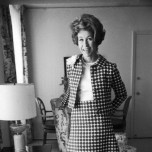 Betsy Bloomingdale died Tuesday afternoon from congestive heart failure, according to family members. She was 93.

At Bloomingdale’s request, there will be no funeral, only a private family burial.

Bloomingdale was a member of a tightly knit group of impeccably dressed rich women based in California, but from the beginning, she stood out from the crowd.

The group had in common wealthy husbands, conservative politics and an affection for designers such as James Galanos and Adolfo. But one of the things that made Bloomingdale exceptional was her remarkable skills as a hostess, and another was her status as then-First Lady Nancy Reagan’s best friend.

Bloomingdale’s longtime friend Lynn Wyatt described her Wednesday as “always so jovial and so hospitable,” mentioning they last crossed path at Reagan’s funeral in March.

“She was something from an era that is passing, and she was a major part of it and a wonderful friend. We’d see each other at Dior haute couture a lot – we wore a lot of Marc Bohan’s clothes,” Wyatt said. “A couple of times we had the same things made, and we’d tell each other, and I’d say, ‘Can I wear our dress to such and such?’ We’d always check with each other.”

Wyatt said Bloomingdale was known for hosting “wonderful dinner parties in her home that were very personal and always with the most delicious food. I don’t know how many people entertain in their homes anymore,” Wyatt said. “My children and her children are older, but the real young don’t even want our silver. They’re not interested in that. They don’t appreciate the value of having fabulous silver and china and people recognizing it. That era is disappearing but that’s OK, it doesn’t stop me.”

Curator Kevin Jones, who worked with Bloomingdale for the 2009 exhibition of her clothes at the Los Angeles’ Fashion Institute of Design and Merchandising, said she “explained all of the mystery of the haute couture that has faded away. Now haute couture is used for media and that’s great. But very few people lived the haute couture and she was one of them. For her, it was just a part of her life.”

As a founding donor of the museum, Bloomingdale dug in and talked about what haute couture was about, why she wanted to be a part of it and how it worked into her lifestyle, Jones said. “When she was finished with it, she just walked away because the couture changed. It is now geared for media, selling perfumes, bags and all those wonderful things, but it was no longer a way of life so she moved on. She was always so modern that way.” Jones said. “She was not precious and did not just talk about, ‘Oh, the past, the past, the past.’ She was always busy, busy, busy. That’s part of the reason she invited the museum over to look in her closets and take whatever we wanted. She was done with it and she was ready to move on.”

Dennis Basso said Wednesday, “Over the years, I met her from time to time and she was always the perfect lady – old–school, from an era gone by.”

When Bloomingdale published her book, “Entertaining With Betsy Bloomingdale: A Collection of Culinary Tips and Treasures From the World’s Best Hosts and Hostesses,” written with Catherine Whitney, which came out from Beautiful America Publishing Co. in September 1994, Aileen Mehle wrote about it in her Suzy column. As she put it, “It’s filled with tips, menus and treasures — ‘from the world’s best hosts and hostesses’ by a woman who certainly belongs in the top 10. Every time somebody famous hits Beverly Hills, you can find him or her at Betsy’s table — sure of fabulous food and a good time. Princes, heads of state and the terribly rich and well-known all dine there. The zillionaire Walter Annenberg practically crosses the country for her succotash.”

One of her methods was to photograph each place setting she created, and to keep detailed records of each party, including who attended and what was served.

Among the events described in the book are what Bloomingdale called a “twisting party.” In an interview that ran in The New York Times Magazine in November 2000, Bloomingdale recalled it, saying, “We gave it at Romanoffs, and I think it was New Year’s Eve 1961. They were supposed to wear something you could twist in, but they didn’t know what the twist was. We had Chubby Checker and we had Louella Parsons and Hedda Hopper, Bob and Rosemarie Stack and Arlene Dahl — she was absolutely divine. At midnight, the women went into the powder room and changed into twisting clothes and shook it around.”

Bloomingdale was born Betty Lee Newling, the daughter of a Beverly Hills doctor, Dr. Russell Lee Newling and his wife, the former Vera Browner, on Aug. 2, 1922. She married Alfred Bloomingdale, an heir to the Bloomingdale’s department store fortune who founded the early credit card company Dine and Sign, which he sold to Diner’s Club in 1951. He then became a Diner’s Club executive, eventually the chairman of the firm’s board. The duo had three children — Geoffrey, Lisa and Robert, and had a dazzling, high-profile social life in New York, Washington and the South of France.

Over the years, Betsy was often photographed in the garden of her Holmby Hills house, designed in Hollywood Regency style by Billy Haines. The flowers at her parties were bouquets of dahlias or zinnias, never roses.

She loved fashion all her life. In September 1976, her daughter Lisa said, “She never pushed me into it. She just dangled it in front of me.”

The first mention of Bloomingdale in WWD was in January 1966. It was a tribute to her packing style. “Betsy Bloomingdale’s black-and-white tweed luggage never seems to cool off,” the article said. “She’s always off to New York, Honolulu, Europe…visiting the children at school…traveling with husband Alfred when he’s on Diner’s Club business and it’s having a system that keeps the chaos out of choosing and packing.

“’I’m a flat packer,’ [Bloomingdale said,] ‘Everything is packed with a hanger and layers of plastic between — it lets the air get between the clothes and they don’t wrinkle. My maid is probably the inventor of Baggies packing.’”

The article then went on to describe her choices for Honolulu: “’I take swimsuits, slacks, linen or cotton dresses, very thin nighties, only one long dress,’” she said, observing that her favorites included a dress from Mollie Parnis and one from Ben Zuckerman.

In her Holmby Hills house, Bloomingdale had 11 impeccably maintained closets. Curators Kevin Jones and Christina Johnson, who organized a 2007 show of 60 pieces from her holdings at the Los Angeles Fashion Institute of Design and Merchandising, were surprised to find each look carefully packed in tissue paper and labeled with a detailed tag which mentioned when Bloomingdale wore the dress or suit, which accessories and shoes went with it and, at times, how to put it on.

It was her husband Alfred, Betsy told WWD in November 2007, who was partly responsible for the fact that she wore couture clothes. At the time, the L.A. show, “High Style: Betsy Bloomingdale and the Haute Couture,” was about to open.

During a business trip, Betsy recalled, Alfred Bloomingdale had met with Jacques Drouet, then chairman of Dior, and with Ginette Spanier, then directress of Balmain. He was trying to persuade Europeans to use credit cards.

The WWD story went on, “Both told the businessman that his better half had only one choice. ‘Ginette said, “Your wife must dress in the couture,”‘ Bloomingdale recalled. ‘And Alfred said, “So she’ll dress in the couture.” My first dress was Balmain.’”

In the same story, socialite Lynn Wyatt, a longtime friend, recalled that Alfred Bloomingdale liked to go to couture ateliers with his wife. “He was very proud of Betsy when she would come out just looking wonderfully dazzling.”

Betsy also noted that her husband, who died in 1982, was proud of the fact that she was on the Best Dressed List; she was later inducted into its Hall of Fame.

Galanos told WWD that Bloomingdale and Nancy Reagan rarely vied for the same dress. The reason, he said, was that they had very different styles, because Bloomingdale, who was tall and willowy with good legs, was at least six inches taller than Reagan.

Bloomingdale was a close friend of Jerry Zipkin, one of the most famous walkers of the Eighties and an inspiration for the term, which was coined by WWD. At one point when she was going out a great deal, WWD twitted the socialite by referring to her as Betsy Moth, a term that derived from the newspaper’s nickname for Zipkin, the Social Moth.

Each June, Bloomingdale would go with Alfred to Paris, where she would take in the fall couture shows and have lunch with friends such as Wyatt and Nan Kempner and compare notes. She would buy two day and two evening looks, but never embroidered evening styles, which she considered too expensive. This ritual went on for 30 years, but it ended in 1996, when she bought her last couture piece, a black crepe and chiffon evening dress by Gianfranco Ferré for Christian Dior. She told WWD that she was unable to relate to Ferré’s successor, John Galliano, citing his eccentric appearance.

In a WWD article in August 1976 about socialites entering the fashion game, among them Gloria Vanderbilt and Charlotte Ford, Bloomingdale said, “I am apt to wear both designer and nondesigner clothes. I don’t buy labels, I buy fashion. I have not seen Gloria Vanderbilt’s designs and [those of] the other newcomers, so I can’t say whose clothes I would like to wear more. I love fashion and the idea of designing, but I would not really like to do an entire collection.”

Nevertheless, she designed a loungewear collection for Swirl in the early Eighties and went on to become a consultant for the firm. “I’m an idea person,” she said of her role at the time.

It may have been Bloomingdale’s frugality that led her to commit a rare misstep in April 1975, when she presented an invoice that had obviously been altered for two Dior couture garments she was taking through customs. Officials flagged it, and she admitted to changing the invoice. Seventeen months later, she pleaded guilty to one count of concealing an invoice from federal customs officials and paid a fine to settle the matter.

But that wasn’t her only brush with scandal. Unfortunately, in the early Eighties, her husband Alfred embroiled her in an extremely unpleasant episode involving a mistress, one Vicki Morgan, whom he had kept in luxury for 12 years. When he was diagnosed with terminal cancer, Betsy, who had learned of the affair, cut off her allowance.

Morgan’s response was to file a multimillion dollar suit for palimony, in a case replete with sordid — and never substantiated — details, which included S&M. The courts threw the case out, and Morgan was murdered by her roommate, Marvin Pancoast, in 1983.

To her credit, Betsy Bloomingdale held her head high throughout these events, and she also remained friends with writer Dominick Dunne, who used the Vicki Morgan story as the basis for a 1990 novel, “An Inconvenient Woman.”

At the American Ireland Fund gala at the Beverly Wilshire in L.A. in November 1995, WWD reported, “Betsy Bloomingdale ran away with the Party Girl award. She ended the evening smoking a cigar and leading the guests in a conga line — all of which was captured on film by Herb Ritts.

“’I never knew Betsy Bloomingdale could be so much fun,” Ritts said.