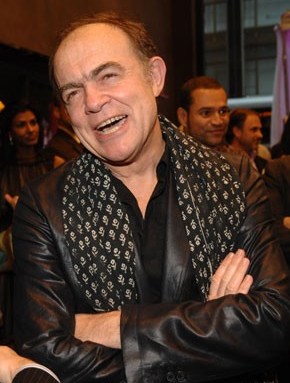 Apparently, it is never too late to celebrate a store’s arrival—even if said shop opened its doors months ago. On Thursday night, a curious mix of models and French-speaking anonymes, some toting along their purse-sized pooches, flocked to 57th Street, where Christian Lacroix was making his first Big Apple appearance in four years at his namesake boutique.

Guests crammed into the brightly lit and steamy space, that had even zero body fat mannequins sweating it out. “It’s too hot in here. It feels like detox!” exclaimed catwalk favorite Emina Cunmulaj as she beat a hasty retreat.

Lacroix gamely stuck it out. “I’m a New York lover,” proclaimed the designer, who was last here to receive an Alliance Franciase award. So why the delay in ribbon-cutting? Though he blamed scheduling issues, he admitted the transatlantic flight was not his favorite route. “I prefer trains,” he smiled. Certainly his absence from New York has left Lacroix less familiar with the ever evolving sea of social faces. “You’ll have to introduce me to everyone,” he quipped.

Indeed, at the private dinner that followed at the Gramercy Hotel Rooftop Garden, many in attendance like Marjorie Gubelmann, Jennifer Creel, Amanda Brooks, Debbie Bancroft and Alex Kramer had never before met the designer (nor were they very familiar with his clothes). Luckily Lacroix had a few familiar faces in the crowd, though even they were sporting other labels.

“I’m so happy he’s here,” exclaimed longtime acquaintance Blaine Trump in white Michael Kors. Meanwhile, Sarah Jessica Parker begged off any interviews having come “as a friend, straight from work.” “I didn’t have time to put on Lacroix,” she explained of her Martin Margiela and jeans ensemble.

In fact, one of the few ladies showing off his exquisite handiwork didn’t even stay for dinner. “I’m going home to get a good night’s rest,” said Muffie Potter Aston, who was wearing her mother’s beaded Lacroix evening jacket. “My mother always said, Know your Cinderella moment, leave them wanting more.”