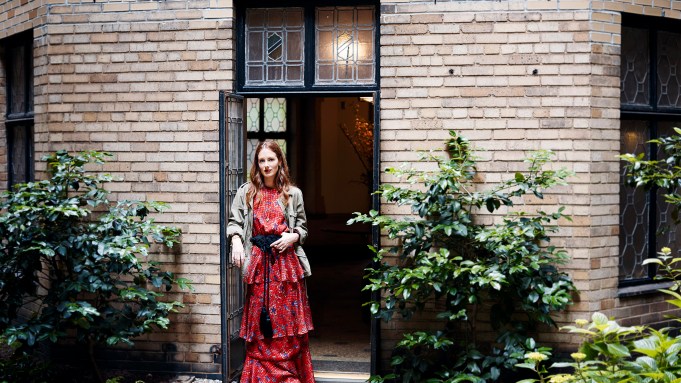 For those not already privy to her decision, the announcement that Bettina Prentice was moving her communications firm away from event production — delivered during the Museum of Art and Design’s Glitter Grunge Disco for its young patrons in April — was met with quiet shock.

But sitting in the flowering Gramercy Park on a recent morning, it becomes clear that the decision was made after a good deal of introspection and discussion with her inner circle.

“The inspiration was Madeline Weinrib,” says Prentice, referring to the textile artist, a close friend who decided to close her business this spring after 20 years. “It was over many cups of coffee with Madeline that I started to realize I could also make my own decisions about how to move forward, and the events — as much as I love them — are an all-consuming part of what I was doing. Also, more and more luxury brands were reaching out to me about collaborations and consulting and I found myself enjoying the cultural consultant work more.”

The foundation of Prentice Cultural Communications harkens back to collaboration. While Prentice is often highlighted for her sartorial sensibility — the elegant park is a fitting habitat for the redhead, both in her penchant for flowy, flowered dresses and thoughtful, affable demeanor — behind the scenes she has cultivated a unique approach to storytelling. Company clients have included the Art Production Fund, the New Museum, Brooklyn Museum, the Museum of Arts and Design, Google, Tiffany & Co, and Bulgari, among others.

“Most people associate me with PR, but I’m also planning the event, doing the production, writing the guest list, selling tables and securing sponsors. We were really acting like a SWAT team for these institutions and nonprofits, and making strategic introductions for board members and major donors,” says Prentice. “There was no real scope of work, it was just how can we help them reach their goals.”

A New York City native, Prentice headed to D.C. to study theology at Georgetown; once there, she quickly pivoted to focus on art. After graduation, she began her career at the front desk of Sotheby’s; after six months, Tobias Meyer, formerly the head of the auction house’s contemporary art department, encouraged the company to move her to a specialist department. She left to start her own art communications company in 2008, Prentice Cultural Communications, where she has repaid the support of her mentors by nurturing the careers of her young employees. She also became a mother along the way, working throughout the pregnancies of both her young children.

MAD trustee Mike De Paola has been one of her ardent supporters; together, the pair revived the museum’s young patrons ball.

“He’s the one who brought me onboard to MAD, allowed me so much creativity, and supported me no matter how wild the idea,” she says. For the first event, the duo planned an evening rooted in time-travel, the medium of artist honorees Peter McGough and David McDermott.

“We hosted it at a Beaux Arts mansion on the Upper East Side, and weren’t allowed any sponsors because it wouldn’t be period. We redesigned the museum’s logo to be Art Deco, and in lieu of the step and repeat did an ice sculpture of their logo — because in 1928 it was the height of decadence to have ice at all, let alone to do something like an ice sculpture with it,” explains Prentice of the concept, which was thoroughly researched. The company dived into the archives at the New York Public Library, and pineapple upside-down cake, which was all the rage at the time, even made it onto the menu. It’s the attention to detail and design that has made Prentice so in-demand.

“Those things could always go kitschy in a Titanic way. Everything down to what was on the table, silverware, flowers, the venue, it was literally out of the 1920s. And that set the bar for all the projects we did after that,” says De Paola. “She had this giant ice sculpture created at the entrance to the venue with MAD carved in ice, in the font that MAD uses. Who does that? So I knew then that I was dealing with someone who knew how to get things done. It wasn’t until maybe the third Young Patrons ball that I said to myself, ‘The artist here is Bettina.’ She’s creating these little life dioramas; she’s bringing them to life and then it kind of just goes away when the night is over. It’s performance art at its best.”

Prentice points to watching black-and-white films while growing up as a root of her cinematic approach to event planning.

“You want to create an immersive experience. I want that suspension of disbelief. There’s always an entrance moment — there has to be that tunnel — there’s an outside and an inside,” she says. “So we usually park cars outside our events to set the tone.”

For MAD’s event this spring, that was a car coated in glitter parked outside the West Village venue; for the time-travel event, it was a 1929 Ford Phaeton. She recreated famous nightclub The Stork Club for a private client’s 40th birthday; she had henchmen stationed outside in 1940s double-breasted overcoats with dobermans. (A nod to the club’s rumored ties to the mob.)

“Bettina is much more than an event producer; I think of her as the director or architect of this impactful mise en scene,” says Cleo Wade, a close friend and frequent attendee. “The best thing about going to one of her parties is that they don’t feel like events at all. You feel as though you have been invited to be a part of something. She draws you to the cause, the artist, or institution in such a magical way.”

Wade was tapped by Prentice to host a benefit for the Contemporary Arts Center, New Orleans in 2016, which she planned pro bono for the arts organization. Prentice notes the event, which was held at famed jazz club Minton’s in Harlem and featured music curated by Solange Knowles, as a moment of pride — “being able to create something out of nothing,” as she describes. “It cost the museum basically no money; everything was calling in favors.”

“I learned early on from our conversations that she was invested in telling stories about art and artists that don’t usually get told. And that her drive came very specifically from her personal sensibilities about justice, community and what is possible when people are brought together with a mission and cause,” says CAC visual arts curator Andrea Andersson.

While many events are held at the usual suspects — Cipriani, Hammerstein Ballroom, Spring Place — Prentice often goes in search of spaces not built for events; New Museum’s NextGen benefit has taken place at both Bathhouse Studio and the 100 Barclay Street penthouse. Even though Prentice is moving away from full-scale event production, she’ll continue to work with organizations on concept and helping link them with producers as she moves her focus to cultural consulting work and connecting artists and brands.

“Collaboration is key to everything I’m doing in the future,” she says. “There are right and wrong ways to do a collaboration between and artist and brand. I started my original art communications agency because I wanted to help artists communicate more effectively.

“Part of what I do in a collaboration is I’m always looking out for the artist as well as the brand. You want to make sure that an artist is expanding their practice, and then it’s a win-win for everyone rather than doing a keychain or something and they lose credibility, and their market suffers. It’s all about doing something that feels organic and relevant. Relevant is a word that comes up in the office a lot: I think there’s so much opportunity right now for brands to take these incredible budgets they have and be contemporary patrons of the arts. There’s a way to make great art possible with these budgets that already exist.”

She points to the artist collaborations she helped facilitate for Tiffany & Co. for the Whitney Biennial.

“One of the artists — this is the proudest moment of my life maybe, other than my children — is Harold Mendez did a Colombian death mask that went into the window at Tiffany’s. That was not a keychain, it was an incredibly successful work. And he was so proud. It remains for me the gold standard,” she says.

“We don’t participate in RFPs, we’ve never had to do business getting — brands tended to seek us out I think when they’re looking for that authenticity. We can still guarantee ROI, it just doesn’t have to always be this formula,” she says.

Currently, she’s working with the Peninsula Hotel to help it develop a global program rooted in experiential art. That project, which she is cocurating with art scholar Isolde Brielmaier, will kick off in Hong Kong.

“There’s a lot to be grateful for and look back on proudly. It’s been a very exciting, happy 10 years,” she says. “Since I made this decision, I’ve felt so awesome that I can steer my own destiny.”