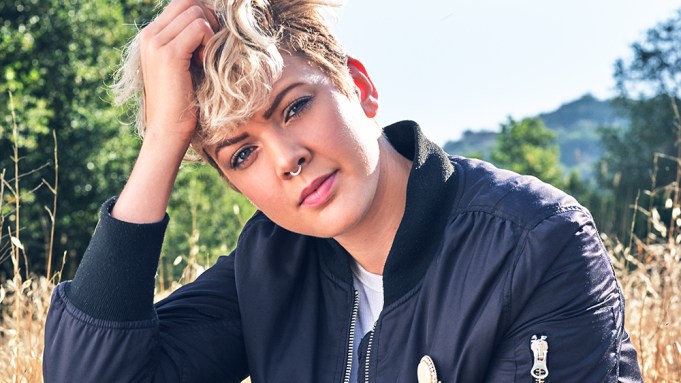 In her first attempt at arriving for a WWD shoot, Betty Who was foiled by a brush fire – which didn’t shake her from coming back the next day to explore around Topanga Canyon in L.A. If anything, the 25-year-old Aussie pop star seems to crave a wild adventure: she uprooted from her native Sydney to attend a performing arts high school in Michigan just to give herself the best possible foundation for success.

Born Jessica Anne Newham, Who released her debut album, “Take Me When You Go,” in 2014 and saw it rise to number one on the iTunes pop charts. She has performed for President Obama and opened for Katy Perry, on the Australian leg of her tour.

Her latest single, “Human Touch,” is out now, with her sophomore album expected early next year. Here, WWD chats with Who on the phone while she was visiting her parents in Michigan, on a rare day off.

WWD: When you were growing up in Sydney, how did you become interested in music?

Betty Who: I started playing cello when I was four years old. I was always skipping class to go to music lessons — it was always something I was dedicated to. I studied songwriting [at Berklee College of Music] but I finished in professional music.

My mother is American and my dad is Australian, so I always had dual citizenship anyway. And then I moved from Sydney to Michigan because I got into a performing arts high school in Northern Michigan and my parents were like, “We’re not letting you go by yourself.” So my parents bought a house out here while I finished school.

WWD: How have you approached the second album?

B.W.: I think it’s just about finding something that makes you really happy. No matter how much you think about other people when you’re creating an album, it’s never going to mean anything to you if you don’t make it personal. I think on our earliest album I spent a lot of time thinking, “Oh people will love this,” but when it got down to it I wasn’t like, “This is me.” It doesn’t matter how much people love it, it doesn’t feel like me. And so those songs won’t make the record as much as the other songs I want. Like, “Oh my god, this sounds really personal.” It should really reflect who I am, and that’s the kind of stuff I want to put out in the world. I don’t want to ever make a song or a record about me trying on a hat for the day. I want it to be really authentic.

WWD: Do you feel pressure in creating this new sound, with your sophomore effort?

B.W.: Yeah, 100 percent. I’m just hopeful and my expectations are low. I don’t want to…I think second-guessing yourself and coming from a place that’s writing from cautiousness and sincerity is a good motivator because you’re not too over confident and I’ve tried to stay not overconfident because I don’t think that serves anybody. Any time I’ve ever been confident about anything, then something goes wrong. So I’ve learned just play it day by day. Don’t be too afraid of what people think because you’re not gonna make everyone happy.

WWD: Lastly, why the stage name of Betty Who?

B.W.: There’s something nice to me about keeping something about me private…something about my life that’s just mine, and for the people outside my work. I think especially when you do what I do, a lot of people feel this way – that you’re selling yourself. You feel like you don’t have a lot to hold onto otherwise. Because when I get onstage I give everything. I try to give all of myself away. And sometimes I get off stage and it’s like, “Oh my god, I have nothing left that’s mine.” And for that, one of the first things I wanted to do is have something that gave me that separation and that peace of mind so I didn’t completely lose myself in the thing I was doing.