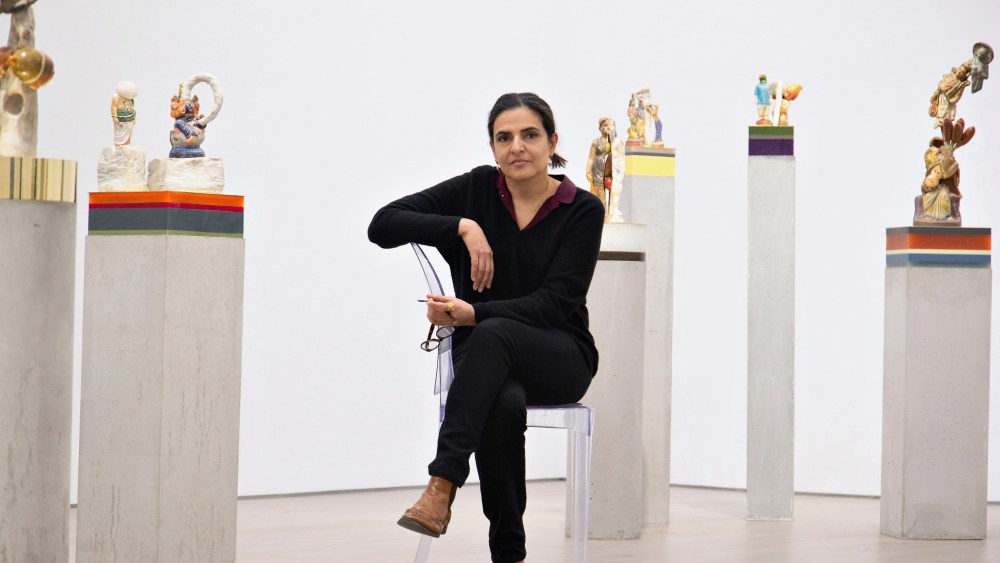 These are a few of Bharti Kher’s predictions for 2020: “Texting will be made possible by thought power alone, using headsets that detect and convert brain signals to digital signals. A pill for curing malaria will be available, and major experiments in longevity yield promising results. Right wing ideologies find voice in leaderships across the world. Climate crisis caused by changes in the weather becomes a major threat to the earth and its ecosystems. I am 51.”

The artist outlines these predictions and many more, for the years 2010 to 2039, in a booklet accompanying her 30-year project “Virus.” The artwork, composed of a spiral of white bindis, is affixed to the wall leading into the skylit exhibition space at Perrotin gallery in New York. Kher, who lives and works in New Delhi, India, has been staying in one of the gallery’s top-floor artist apartments while installing “The Unexpected Freedom of Chaos,” her first solo show in New York since 2012. The exhibition marks a continuation of her exploration of ideas around the self, sight, and change.

Kher notes that in the time she’s been away, New York has changed — but so has the world, so has her art, and so has she.

“Our bodies are constantly breaking down, our cells regenerate every 40 days, they destroy themselves and new ones are made,” she says. “So we have this incredible possibility of being new if you want to every 40 days.”

The artist’s sculptural cracked mirror works are stationed on the perimeter of the room, affixed to the walls and facing out on her smaller scale “Intermediaries” clay sculptures propped on custom pedestals throughout the space. All of the work in the room is fundamentally broken, although each piece has been transformed past a point of damage.

“All the works began with the element of breaking, and the design of the hammer,” she says of her process. “They just break how they’re going to break, and for me that’s part of the joy — that the work takes on its own life and becomes what it needs to become.”

What she means is that she breaks her art in order to expose it, and in doing so explores the possibilities of what that object is capable of being. In a similar vein to how Japanese pottery is repaired with gold and the visible cracks are celebrated, Kher uses the visual fracture to inject an element of vulnerability into her work.

“You have to break them to then work on them, and fix them,” she says. “A lot of the work is about regeneration. When you break something, you free it from itself. There’s no longer a mirror, it’s something else. And that as an artist gives me freedom and the possibility to change the thing, the very fundamental of the object itself.”

Kher taps into the history of mirrors and how they relate to a connection between the body and mind. Not that the works are mirrors in function; in addition to being cracked, the surface is mostly obscured by colored bindis.

“The bindi is a marker, it’s a sign of consciousness — that’s why I use them,” she says, adding that they also represent the literal residue of someone’s day. The bindis operate as a restorative agent for her works, as well as a symbol of both sight and the self. “What do you see, how do you see — if you stick one [on the mirror’s surface], then that’s an eye, is it looking at me now? Are these works now interactive?”

Whether or not the works themselves are seeing, they do face and somewhat reflect Kher’s “Intermediaries” series of smaller clay sculptures, elevated around the room. Similar to the mirrors, these works are cracked, broken, smashed, or cut, and transformed through repair or collage. Cheekily named, the figures — which Kher has collected and refurbished with often surreal results, superimposing the human with the divine — also connect back to 2600 B.C., when during the Harappan civilization in South Asia it was believed that the act of blowing into clay would bring it to life. Kher’s works might not be specific to herself, but they are markers of her own presence.

After spending last year in a highly generative space, the start of this year is proving to be more skewed toward exhibiting for the artist. In addition to her show at Perrotin and a scheduled talk at Harvard University on March 3, Kher also has an exhibition opening next month at the Irish Museum of Modern Art. And her large-scale sculpture, part of the Dhaka Biennale, should start disintegrating any day now.

The artist also designed a tote bag as part of Parley’s Artist Ocean Bag collaboration, which will be sold at Perrotin during her exhibition and benefit the organization’s efforts to remove plastic from the oceans and other bodies of water. While environmental causes can stir up dire narratives, Kher is doing her part but remaining optimistic about the possibility for change outside of her artwork, too.

“You have space for repair and regeneration, and we have capacity to do great things, too,” she says. “So we can change — everyone can change. We change every 40 days, don’t we? It’s in our DNA.”

Museum of Graffiti Opens in Wynwood