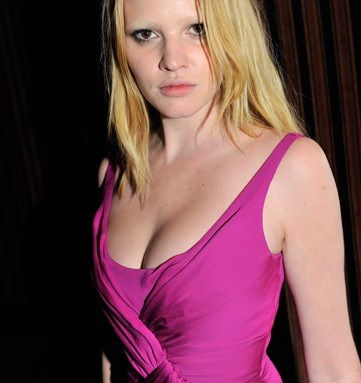 Stella McCartney combined Cool Britannia with French flair on Wednesday night when she opened her new Paris flagship for a crowd that included the usual suspects such as her dad, Marianne Faithfull and Catherine Deneuve — as well as a few newbies.

“I’m not in fashion, I’m a trucker,” claimed Nancy Shevell, Paul McCartney’s girlfriend, a freight company executive, who refused photographs in a bid to keep a low profile.

Sir Paul, meanwhile, was jubilant. “For a British designer to have a boutique here in Paris is pretty cool,” said the former Beatle.

Deneuve was equally impressed. “I’ve been asking who designed it, how long the work took and where did that big amethyst came from?” she said, pointing to the giant gem (which was found at a flea market).

Meanwhile, models Lily Donaldson, Lara Stone and Sasha Pivovarova traded fashion week tales. “At Givenchy, they had to cut off my bracelet with pliers in a tiny room with like 5,000 people,” said Stone, who recently moved to London.

Donaldson recalled the fright she got showering after Giorgio Armani Prive and forgetting about the black dye that was used on her hair. “I was thinking what is wrong with my head?” she said.

For her part, Pivovarova had received an exciting proposition. “Karl Lagerfeld’s asked me to illustrate a children’s book,” the model and budding artist said proudly.

Rising French actor Melvil Poupaud, meanwhile, was recovering from being tortured by British tough-guy actor Ray Winstone for the movie “44 Inch Chest.” “It was tough to play, it was sacrificial,” he said.

Later, the McCartneys moved on to a three-course vegetarian meal at Le Grand Vefour. It culminated with artichoke crème brulee, and a game of “Who am I?” where everyone from Francois-Henri Pinault to Suzy Menkes had cigarette rolling paper stuck on their foreheads.

Deneuve divined immediately that she must be a singer. (Madonna, in fact.) As if on cue, Lulu picked up the microphone and belted out a few tunes, including Van Morrison’s “Brown Eyed Girl,” which got Faithfull hooting and Donaldson waving her lighter.