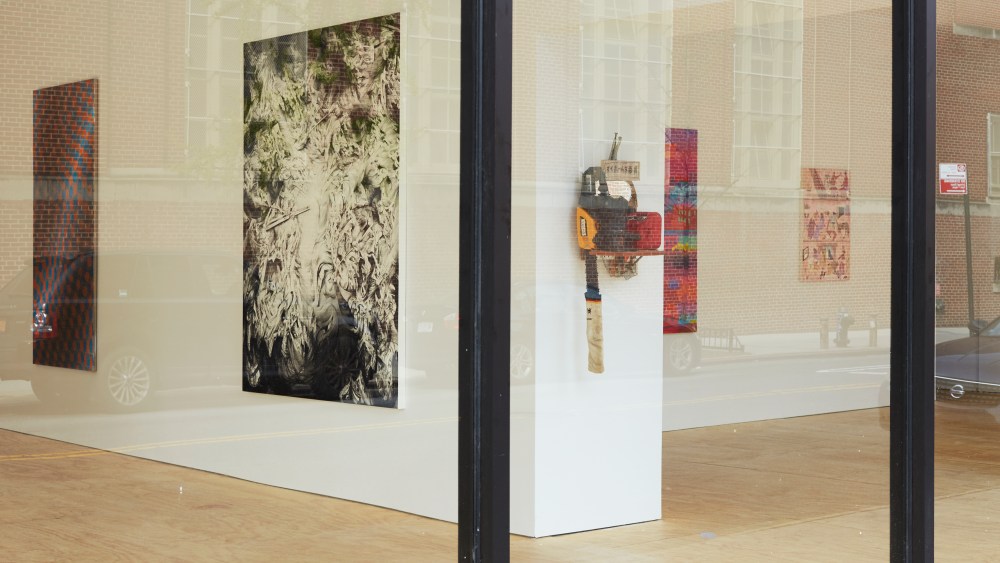 Bill Powers reopened Half Gallery in its new East Village location in late February, on Leap Day. The opening was short-lived, though — two weeks later the COVID-19 crisis meant an early closure for the gallery’s inaugural Tanya Merrill solo exhibition (luckily, it had already sold out). And while the space remains closed to the public for the time being, Powers is feeling grateful for a prime feature of the East Village corner space he initially questioned.

“I was like, ‘Why do I want all these windows?’ when we opened the new space,” says the gallerist from his family’s home in the West Village. “And now it may turn out to be the thing that saves us for a couple of months.”

While many galleries and art fairs have turned to online viewing rooms and digital formats in the wake of the coronavirus — curating new exhibitions with little lead time — Powers has taken a unique approach to showing work in these socially isolated times. This week Half Gallery installed the group show “Under Glass,” featuring new and unseen works by artists like Pauline Shaw, Michael Kagan, Anna Park, Tom Sachs, Ethan Cook, Andrea Joyce Heimer, Ginny Casey, and Chloe Wise. But the works aren’t only available online; they’re actually hanging in the gallery, visible from the street through the gallery’s windows. You might not be allowed to come inside the gallery at present, but if you’re wandering by, you can peer in.

“We’re treating the gallery like a museum diorama,” says Powers. “Museums and galleries have always had the ‘look but don’t touch’ policy, but now we’ve taken it a step further.”

The concept of exhibiting work to be viewed from the street is not without precedence in New York; Maurizio Cattelan (of recent Art Basel banana fame) curated a micro doorfront gallery space measuring one square meter on 20th Street in the early Aughts, and Ugo Rondinone’s former studio window still exhibits a rotating artwork at 39 Jones Street (currently a John Giorno piece).

“It’s not exactly public art, but it’s art that the public can see,” says Powers of the hybrid format.

Although the works included in “Under Glass” are connected by the concept rather than thematically, Powers notes that several pieces do speak to the current moment. Wise, who lives a few blocks from the gallery, in the last few weeks responded to the pandemic through a painting of a woman pulling a Kleenex from a box with an anonymous gloved hand nearby, both rendered in an Old Masters-style hand position. Sometimes the connection to the present is more fortuitous, and changed context can transform how certain works are interpreted. Ewa Juszkiewicz’s portrait of a woman with her face obscured by hair (a signature for the artist) draws comparison to Hong Kong protestors who covered their faces with their hair in response to last year’s anti-mask law. And there is a familiarity to the chaotic domestic scenes depicted in Heimer’s “Dress Sewing And Other Preparations For Winter Prom 1997 in Black Eagle, Montana.”

Half Gallery recently participated in the Dallas Art Fair via an online viewing room, and will do the same for the New York edition of the Frieze Art Fair in May. Although a nice solution, Powers considers online viewing rooms as more of a short-term fix, and certainly no substitution for the visceral experience of an artwork’s physical presence.

After you’ve scrolled through 10, 20, 30 online viewing rooms, it can be hard to maintain engagement. “I always imagined that online viewing rooms would be added value rather than our primary point of entry,” says Powers. To help bridge the gap to a more active experience, “Under Glass” is accompanied by an audio component online; many artists included in the show recorded a short clip discussing their work.

“Under Glass” will be on view through Memorial Day, and despite the tentative May 15 expiration of New York’s stay-at-home order, Powers acknowledges that there’s a good chance the show will only ever be publicly seen from the outside looking in.

“In terms of the gallery itself, it still feels like a Christmas present I was allowed to unwrap but not open,” he says.