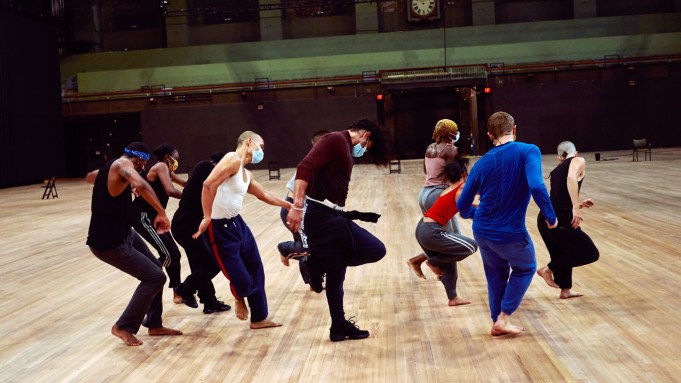 “How are you?” is a loaded question for Bill T. Jones.

As an answer, Jones offers up a description of his surroundings: he’s at home, north of the city where he and his husband have been renting, in his office looking out on trees and the occasional deer and flock of turkeys that wander by.

Another answer: Jones is busy. Several weeks before the premiere of his dance “Deep Blue Sea” at the Park Avenue Armory, he’s memorizing Martin Luther King Jr.’s “I Have a Dream” speech, which is part of the dance’s sound composition.

“The [dance] deals with memory on different levels,” says Jones, describing the work as deeply personal. “There’s my own memory of what it’s like to be a child growing up in upstate New York; everything on the evening news at that time,” he says. And then there was his memory of Herman Melville’s “Moby Dick,” which he read in high school. He’d forgotten about Pip, the young Black deck boy on the ship who gets left out at sea by himself.

He began working on the piece after a police officer in Ferguson killed 18-year-old Michael Brown in 2014, after Trayvon Martin, after Eric Garner. “And now the list is, what — how many names now we have on the list? 40, 50 names. So that began to coagulate with my discomfort around the character of Pip in this book that I love, and my sense of the culpability in not remembering Pip,” he says.

“Deep Blue Sea” also marks the first time that Jones, now in his late 60s, will perform in more than 15 years. In addition to dancers from the Bill T. Jones/Arnie Zane Company, the ambitious piece includes a movement score that incorporates nearly 90 members from the broader New York community. The piece features dancers of all sizes and abilities, including deaf and hard-of-hearing dancers.

At its core, the dance is about the tension and interplay between singular and group identities: the “we” and the “me.” Jones’ understanding of what that means has deepened, certainly in the context of the pandemic and the most recent U.S. election. “Pip getting left in the water, it was not intentional, but it happened. And what does that mean? We can see that every day there are victims of circumstance,” he says.

“Deep Blue Sea” was slated to premiere at the Park Avenue Armory right before everything shut down in March 2020. After a hiatus from the stage, his company of dancers was back at the Armory this spring with a new work, “Afterwardsness,” which tapped into COVID-19-era constraints and underscored the importance of the collective.

“[Afterwardsness] was very much about the alienation of the COVID-19 era,” says Jones. “We were in that great hall [the Armory] again, but everyone’s strictly socially distanced. The dancers are all masked; the dancers are not touching,” he adds. “If ‘Deep Blue Sea’ is asking if there is a ‘we,’ COVID-19 answered that in a very resounding way: Yes, goddamn it, there is a ‘we.’ We’re all vulnerable as hell.”

Diller was inspired by the vastness of the Drill Hall at the Armory, as well as the idea of Pip stranded at sea, and aimed to recreate the loneliness of being in an infinite space for the audience. The immersive set situates the audience above the dance floor. The work incorporates a deconstructed vocal score, read by Jones and projected onto the floor, pulling text from Melville’s book and King’s “I Have a Dream” speech.

Jones also reads out a new “No Manifesto,” inspired by the ”No Manifesto” penned by Yvonne Rainer in 1964. He originally wanted to bring Rainer’s text into “Deep Blue Sea” to comment on the experience and loneliness of a Black performer within the white avant-garde. Many of the “nos” from Rainer’s original piece — “No to seduction of spectator by the wiles of the performer” — didn’t resonate in the same way for Jones.

“As a Black performer who often performs for white people, I felt, that is your ticket — you got to understand how to seduce them,” says Jones. “As a young performer, I was trying to get on board with the avant-garde, but something always rankled.”

Jones sourced his version of a No Manifesto from the collective “we” of his company dancers and collaborators; he asked them all to supply a list of their personal “nos.” There’s no to Dolce & Gabbana, no to the 24-hour news cycle, no to liberal guilt.

“They had to be somewhat cheeky and ironic because there should be heat behind them — but they don’t necessarily have to stand up to discourse. Manifestos are not about that; they are designed to clear the air,” he says.

Jones’ role within the history of contemporary dance is well-defined. But his success raises more questions for him — what does it mean to be an exception? — which in turn encourages Jones to continue seeking answers through creation.

“There is this feeling that something had to be paid to be who I am now, to have found the success that I found in the ‘American theater,’ but more precisely in the white avant-garde. What was the contract?” says Jones.

“Rather than sitting and brooding, can you find a way to make — and I use this word plaintively — a poem out of your questions,” he says, addressing himself. “An epic poem is what ‘Deep Blue Sea’ strives to be. I’m not a scientist, and I’m not a politician. I am an artist — and a poetic one.”