Birds Of A Feather

Cate Blanchett was toasted by husband Andrew Upton and friends at a dinner in her honor at the Country restaurant hosted by Gucci. 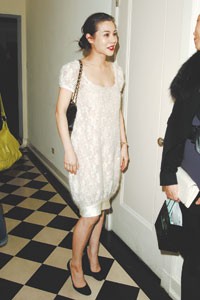 “Do you like the bread? I baked it myself,” joked Cate Blanchett at a dinner Gucci hosted in her honor Monday at Country restaurant in New York. The Australian actress, who’s coming to the end of her run in the title role of “Hedda Gabler” at the Brooklyn Academy of Music, nearly lost her way among the maze of tables of googly eyed BAM fans and almost headed into Country’s open kitchen. “I’m just going to check on the desserts,” she quipped.

Blanchett was toasted by husband Andrew Upton, who adapted the play for his wife, and was joined by the likes of Amanda and Chris Brooks and Kim Heirston. Next up for the busy star is a return to London, although she’s been enjoying her New York life. “We’ve been living in Park Slope,” she said. “I love it. It’s New York as it used to be, with all the artists and writers around.”

Blanchett and the other members of the Sydney Theatre Company were making full use of their one night offstage — after the four-course dinner, they all headed downtown to watch fellow cast member Justine Clark sing at the Living Room.

The following night in L.A., American-in-Paris designer Erin Fetherston‘s fall 2006 show in Chateau Marmont’s sixth-floor penthouse got so crowded that chairs had to be set up in the hallway. The San Francisco-born, doll-like designer was reprising her Paris presentation of 22 Little Red Riding Hood-inspired dresses plus “Wendybird,” the Ellen von Unwerth-directed short starring her friend Kirsten Dunst. Although Dunst got stuck on the set of “Spiderman 3” and couldn’t be there to play hostess, Fetherston pressed on with help from pals China Chow, Winona Ryder, Ariana Lambert Smeraldo, Amanda Goldberg and curious fashion-phile Kate Bosworth, who came with her stylist, Jessica Paster.

“Since we made the film here, I thought it was only appropriate to show it here, too,” said Fetherston. Despite a technical glitch that had the crowd sitting silently in the dark for a minute, the show was a hit. “I may not be a 6-foot blonde Amazon like Erin, but I am in love with the clothes,” said Chow, who wore one of Fetherston’s samples with aplomb, noting, “It hits my knee, where it hits her mid-thigh!”