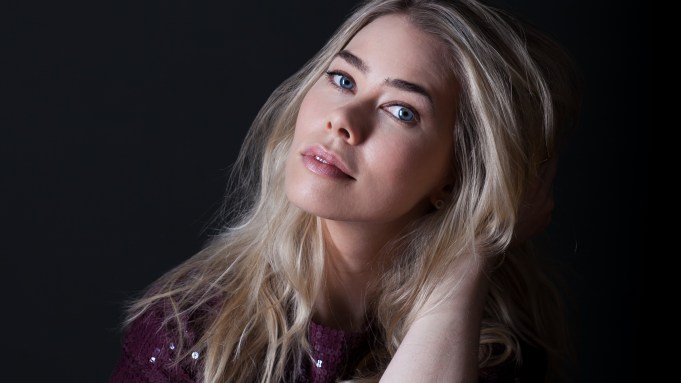 Sex, drugs and rock ‘n’ roll. It may be a cliched way to look at New York in the Seventies, but there’s a reason why such phrases enter the vernacular — they ring true. And though endlessly romanticized, the new HBO show “Vinyl” sets out to show the grittier side of that era. From the first shot of Bobby Cannavale, who plays record executive Richie Finestra, snorting coke in his car there’s a palpable sense of danger and the realization that everyone’s just barely holding it together.

Enter Birgitte Hjort Sørensen, a 34-year-old Danish actress who plays Andy Warhol’s muse Ingrid in the series, which is produced by Mick Jagger and Martin Scorsese. Dressed in platform shoes and a cream cropped top, her brand of danger is the company she keeps. It’s a role entirely different from the one that brought her fame in her hometown of Copenhagen. As the journalist Katrine Fønsmark in the political drama “Borgen,” Sørensen gained recognition in Europe. But last spring, her visibility skyrocketed thanks to roles in “Pitch Perfect 2” and “Game of Thrones.” The blockbuster movie and “Game of Thrones” episode came out within three weeks of each other, prompting a round of press pegged to her Stateside moment.

“That was a really crazy time for me, because it all of a sudden exposed me to a very wide audience,” she recalls. “This was exposure on a totally different level and I felt it. My social media accounts exploded — on Twitter I went from 3,000 followers to 12,000 within a couple of weeks. For me that was a lot.”

On the day of her WWD shoot and interview, she looks every part the movie star, changing out of maroon culottes into flared jeans and a Diane von Furstenberg sweater that “I’ve been allowed to wear this week and I might have to buy it, because it’s become my new best friend,” she says. With her giant blue eyes, slightly upturned nose and enviable cheekbones, one would assume she’s of the model-actress hyphenate variety. “When I was about 18, I tried to become a model for a while,” she says. “ I did some test shoots and they kept telling me my thighs were too big and all that. So it was just a downright horrible experience all through.”

What is the modeling world’s loss is theater’s gain, though she’s still had to get used to the accompanying photo shoots. “It’s very different, because it’s about capturing moments that are still and acting is so much about flow and fluid motions,” she says. “At the beginning I try to do still poses, and then by the end of it I realize it’s easier if I just move.”

She learned to really move for her first role out of drama school, playing Roxie Hart in a 2007 production of “Chicago” in Denmark. “They were looking for dancers to do the lead parts and I didn’t consider myself a dancer. I [auditioned], expecting to be kicked out immediately.” Instead, she got the job. “Two weeks after I graduated drama school we started rehearsals, and I still think of it as some of the happiest six weeks I’ve spent professionally, because it felt like getting inside a dream,” she says.

Still, Sorensen didn’t want to be pegged the “musical artist” girl, so she sought out other roles. When we first meet Ingrid in “Vinyl,” she’s reuniting with an old friend, played by Olivia Wilde. “Our part of the story is something different from the main story, which is a bit harsh, very male-dominated, sometimes even violent world,” she says. “We’re on the side of that, and a lot of times it’s just the two of us. It’s been this little parenthesis, I felt like, into a female friendship.”

As for working with Scorsese, she says, “It’s always so surreal when you meet and work with legends and people you so admire. It’s always amazing because you can feel your heart start beating and then within 30 seconds of having a conversation [you realize] of course they’re just normal people.”

Sørensen may soon have to abandon her own right as a “normal” person if her slew of recent roles is any indication. One surefire sign that she’s making an impact? The legions of teenage girls that started proclaiming their love online following “Pitch Perfect 2.” “They’re so active, and they’ve started to seek out work I’ve done before,” she says. “What really made me proud was one girl wrote at some point, ‘Isn’t it amazing, a few weeks ago none of us knew who Birgitte was, and now we’re all watching ‘Borgen’ because of her — it makes me want to vote.’ That was the coolest moment ever.”