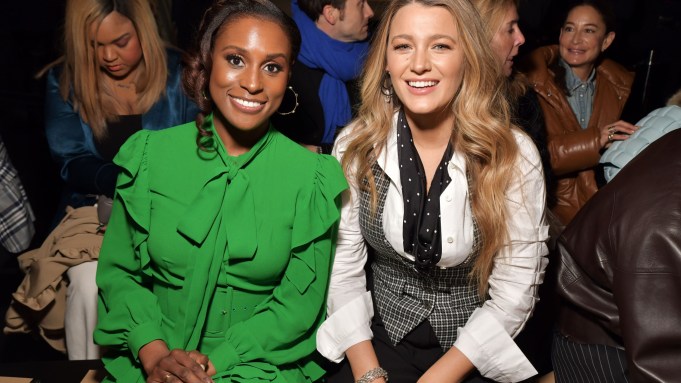 Blake Lively returned to the Michael Kors front row on Wednesday, two years after her last visit to the designer’s show, where she has been a loyal favorite over the years.

Lively, who famously styles herself, chose a men’s wear-inspired look for the show, held at the American Stock Exchange. The actress, who gave birth to her third child in the fall, has been making the press rounds for her latest film, “The Rhythm Section.”

“I love his elegance,” said Rae, dressed in kelly green, of Michael Kors. Rae is in New York doing promotional work for her upcoming romantic drama, “The Photograph,” costarring Lakeith Stanfield and out on Valentine’s Day. “I got to work with [Michael] for the Met Gala for the first time — that’s when I met him. I love his fashion.” As for her own? “I like to be comfortably elegant.”

The pair, who chatted briefly while waiting for the show to start, were joined by Louis-Dreyfus after the lights went dark, just before the show began. Lively, ever the Kors enthusiast, had her phone out held high above her head as the models walked their finale, getting a video for the ‘gram just like the rest of us.