Highlights included a slew of white gowns and dresses in bolder colors, including shades of red and emerald green. 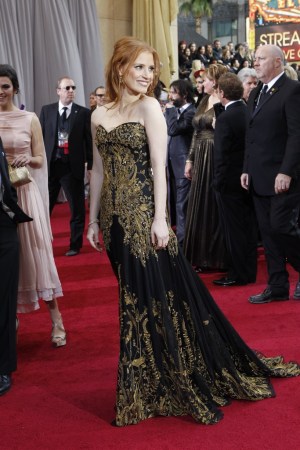 “Girls usually grow up dreaming about their wedding dress; I dreamt about my Oscar dress,” said Oscar first-timer Jessica Chastain, who decided that the 84th Academy Awards was the night to go big or go home. “There was something about this Alexander McQueen dress; it felt like a larger-than-life dress and this is a larger-than-life moment, so it expressed how I feel about this day,” she said.

Fellow nominee and fashion darling Rooney Mara said she was “pretty calm, actually,” in part because she had picked out her white Givenchy gown weeks ago “based on what I liked about their past collections.”

Also in white were Gwyneth Paltrow (in Tom Ford), Cameron Diaz (in Gucci Premiere), Jennifer Lopez (in Zuhair Murad), Georgina Chapman (in Marchesa), Best Supporting Actress winner Octavia Spencer (in Tadashi Shoji) and Shailene Woodley (in Valentino). “I’m in my 20s; there are only so many more years I can wear a dress like this,” said Woodley, who was adamant about “not wearing some satin dress that gets worn every year.”

The other fashion camp went for bold color, especially red, led by Emma Stone (Giambattista Valli), Natalie Portman (Dior) and Michelle Williams (Louis Vuitton), while Viola Davis opted for emerald green Vera Wang. But Williams was still characteristically modest. “I still feel like a misfit at things like this, but a better-dressed misfit,” she said.

Navigating the zoo of dresses was old hat for George Clooney, who was typically calm, even when he temporarily lost date Stacy Keibler in the crowd. “I’m hanging in there,” he laughed and jokingly rolled his eyes as reporters quizzed Keibler about her Marchesa gown. “I feel like girls are harder on girls when it comes to dresses. A guy can look at anything and say, ‘Eh, it looks nice.’ But she looks amazing.”