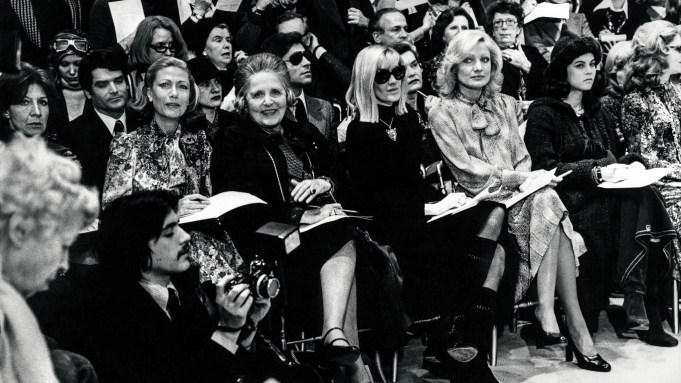 Mary Russell still wears bangs, and beneath them her eyes dart about Café Varenne in Paris with the same curiosity and wonderment as if she were back at the Flore in the Sixties and Seventies whooping it up with the likes of Yves Saint Laurent, Karl Lagerfeld, Andy Warhol, Loulou de la Falaise and Antonio Lopez.

The veteran fashion editor is a photographer to the core, today using a sleek iPhone instead of the bulky Nikon automatic of yore.

“I want to record everything I like. It’s never been about making money or selling pictures,” she says. “It’s sharing an intimate moment for the time I’m there, and capturing the essence of our human connection.”

In fact, roughly 80 percent of the images in her new book, “Entre Nous: Bohemian Chic in the 1960s and 1970s,” have never been published — and most never shown to the famous subjects she captured, from Jerry Hall and Charlotte Rampling to Gunter Sachs and Keith Richards.

Published by Flammarion in French and English editions, the 112-page book is edited by Pierre Passebon, who is exhibiting an even wider selection of Russell images, some one-of-a-kind, in his Paris gallery until Dec. 21.

Russell, who honed her fashion chops working for Glamour, WWD and Vogue in the French capital, figures it’s an apt moment to release her personal treasure trove, many of the photos taken during her 20 years cavorting with the creme de la creme of the burgeoning Paris scene, or on the sidelines of her editorial work.

To be sure, the black-and-white images telegraph more carefree times — and feature gobs of groovy fashions, including Marisa Berenson in the kind of hippie gear you imagine at Woodstock; Jane Birkin, with her demonstrative bangs and lanky frame in a snug sweater dress, or Betty Catroux, timelessly chic in a slim black cardigan and trousers.

“There’s a nostalgia for that. The times are so different now,” she says. “Fashion in those times was fun, easy and magical — and everything was here in Paris. We had time to luxuriate in the romanticism of it.”

While she was shaped and coached by such legendary editors as Diana Vreeland and WWD’s John B. Fairchild, Russell never considered herself a journalist, even if she went about her styling, reporting and photography with great drive and rigour. In the Eighties, she moved to New York and worked for American Vogue, Elle and Taxi magazines. But after losing too many friends to AIDS and substance abuse, she left the business and in 1991 moved to Miami, occasionally doing freelance styling for films and advertising.

Today she lives between Florida and Paris, where her daughter Kitty works as a fashion editor at Point de Vue, and where she can lavish attention on her three grandsons.

An American raised and schooled in France, Russell wound up in New York in 1965 and finagled an audience with Vreeland, who advised her to forego modeling and get into magazines. Vreeland picked up the phone and got her a job as a junior fashion editor at Glamour, first in New York and later Paris.

“We were always broke. I don’t know how I managed,” she recalls. “I had only three dresses, but they were perfect.”

She drops names like Warhol without any pretension, whom she first met at Max’s Kansas City, the nightclub frequented by the likes of Lou Reed, Nico and Robert Rauschenberg. She shared Warhol’s gee-whiz sense of enthusiasm for everything, befriended him and soon adopted his habit of filming everything. “I think that’s where I get it,” she says in an interview. “I just like to record and capture the moment.

“I think it’s just innate curiosity and wanting to be part of the story,” she muses. “I took pictures for the pleasure of taking pictures.”

Russell clasps her hands, smiles and raises her eyes to the heavens at mentions of Vreeland and Fairchild.

“She was the Visconti of fashion, with words, gestures,” she marvels. “I learned a sense of grandeur in our world. I learned about total glamour in images, creating a dream.”

Fairchild, on the other hand, “was really tough. I was afraid of him, but I worshipped him. He taught me about getting the scoop, being the first to get it photographed, the immediacy of the story.”

She recalled him taking her to Rue Cambon to watch Gabrielle Chanel do a fitting, tantamount to a physical attack on tweed jackets. The famously taciturn designer looked disdainfully at Russel’s Courreges minidress and go-go boots, which Fairchild suggested she wear knowing it would irk the designer.

Russell also absorbed much from the great photographers she worked beside, among them David Bailey, Jeanloup Sieff and Helmut Newton.

The latter influenced her the most: “His dark sophistication, his perfectionism, his sense of humor, and the chic sexiness,” Russell enthuses. “He told me never waste a shot.”

While she turned her camera on Mary Quant, Gianni Versace and other artists and designers, Russell was especially thick as thieves with Saint Laurent, who nicknamed her Piggy and sent her clothes, letters and drawings. “He reminded me of my childhood friends because all we were doing was laughing all the time,” she says. “He had the best sense of humor in the world. We were mischievous. We just wanted to stay out all night long.”

Her affection for Lagerfeld, who died earlier this year, also ran deep. “For his genius, his eye, his wit, his total and huge comprehension of everything at once. He was a Renaissance man,” she says. “He was totally generous, and totally merciless, but vulnerable. He had a lovely, vulnerable heart which he hid quite well.”

Except in Russell’s portraits.