Show displays pieces from the designer's archives, including the peekaboo tulle pantsuit Barbra Streisand wore to the 1969 Oscars. 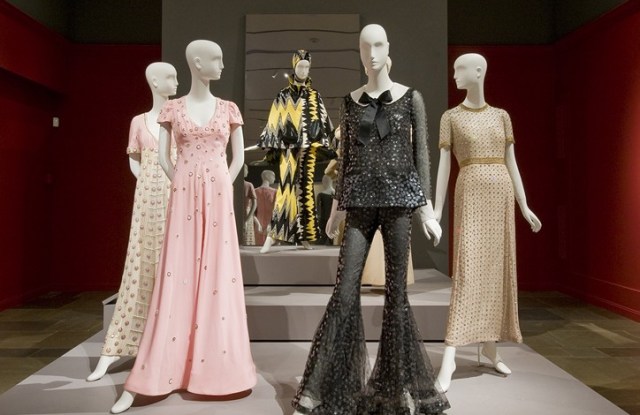 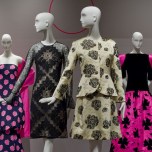 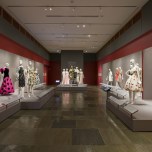 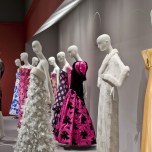 BOSTON — Just beyond the halls of beige-glazed Tang dynasty earthenware, sequins glimmer. The Museum of Fine Art’s new exhibit, “Scaasi: American Couturier,” open through June 19, 2011, has brought flames of color — including ballgowns in fuchsia and dandelion yellow donated by Reagan-era power hostess Gayfryd Steinberg — to a typically quiet area of the museum.

It has also brought the peekaboo tulle pantsuit Barbra Streisandpick wore to pick up her 1969 best actress Oscar for “Funny Girl” and an outrageous motorcycle costume, complete with bumblebee patterned bell-bottoms, balaclava helmet and cape, commissioned for her film “On a Clear Day You Can See Forever.”

The show celebrates the MFA’s acquisition last year of Arnold Scaasi’s archives of more than 120 ensembles and 77 sketchbooks, including fabric swatches, dating to 1958. The museum has been working to bolster its 20th century fashion holdings and MFA director Malcolm Rogers sees the designer’s historic value as a talent who maintained made-to-order as most American designers turned to ready-to-wear.

Scaasi dressed leading socialites, almost every first lady from Mamie Eisenhower to Laura Bush and Hollywood stars. The 79-year-old designer closed his Manhattan studio in July, but was on hand to preview the show, dressed as cheerily as the mannequins surrounding him: a red-and-blue checked tie over an identically patterned shirt. He complained of a stiff neck as he fielded questions in the gallery, but his tongue was limber as ever.

He summed up his aesthetic as liking “pretty, flattering clothes.” The worst thing he could do, pressed one visitor? “Make ugly clothes,” he replied. Upon which, he turned and offered up the example of MFA curator of fashion and textile arts Pamela Parmal’s mustard cardigan. “I don’t like dreary colors like that,” he said.

The show is organized into ensembles worn by four clients: Steinberg, Streisand, Joetta Norban, wife of Joseph Norban, part owner of the famed El Morocco nightclub, and Arlene Francis, an actress and Fifties- and Sixties-era TV game show panelist, for whom Scaasi did lots of swing coats with extravagant linings.

Scaasi noted that in designing Streisand’s notorious sheer pantsuit, he and the entertainer wanted “something young and snappy, as she was.” Although Streisand is the show’s biggest name, Steinberg’s clothes — representing the lifestyle of a woman who became synonymous with Eighties-era excess — may be the most interesting. Prada’s spring 2011 runway has everyone thinking about color and joy — Steinberg’s gowns glow with both. Yes, there are the structured numbers everyone associates with the Eighties (one ballgown has enormous, Elizabethan black velvet puffed sleeves with hot pink satin slits) but there are softer pieces, too, such as a navy silk damask printed with huge pink polka dots, shaped like an inverted vase and a 1991 fairylike ombré chiffon in watermelon with two trailing points. Scaasi recalled meeting Steinberg at the Guggenheim and finding in her an ideal client.

“She had a wonderful figure and she was rich,” he said. “Don’t laugh. Rich is very important when you want to do these kinds of pieces.”