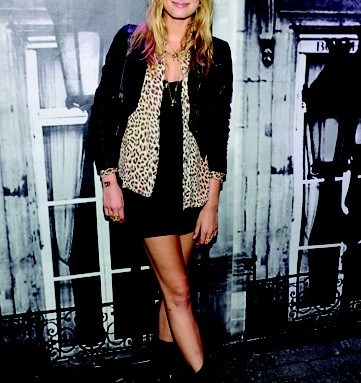 The evening began with a special performance of Spiegelworld’s latest show “Désir,” replete with sailor clad contortionists, gender bending trapeze artists and even a quartet of onsie underwear-clad male acrobats that had actress Melissa George in hysterics. “Those muscles…” she smiled post-show.

After the performance, a macabre mix of guest—many of a European persuasion—mingled on the dock at an after-party hosted by Vanessa Traina and Vladimir Restoin Roitfeld.

“I was introduced to this through Carine because I interned for her over the summer,” explained Traina, who is currently job hunting after a summer spent in Paris.

Tatiana Santo Domingo, Fiona Scarry, Julia Restoin-Roitfeld, Lily Donaldson, Tara Subkoff and Lonneke Engel were joined by a few perplexing faces: David Schwimmer made an appearance in a black baseball cap, refused to have his photograph taken and made an early retreat; Dylan McDermott made the rounds, and Juliette Lewis shrugged off her Fashion Week attendance saying, “I only go to things by friends I support, like Zac Posen.”

Nicole Richie stopped by after the Marc Jacobs show and took a break in one of a few hammocks set up near a tented dance floor as “DJ Santo Domingo” spun tunes (it was not Andres, as many expected, but rather his nephew Julio.)

Close to 1, Victoria Traina and friends rallied over to the Beatrice for the Proenza Schouler after-party.