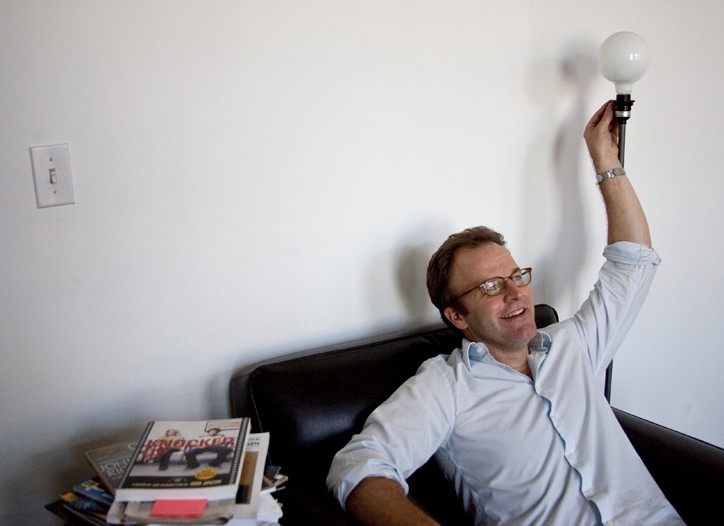 I always assume that any famous person who says you can’t trust almost anything you’ve read on the Internet most likely had something to hide until I met Tom McCarthy. Right before our interview, I did my due diligence on his Wikipedia page and right in between the list of McCarthy’s accomplishments as a writer-director — most recently of the film “Win Win,” and details of his childhood in New Providence, N.J. — was this little nugget:

“He is the silent partner in a chain of successful Papaya Dogs throughout the greater metropolitan area.” What a smarty, I thought, hedging his bets in the fickle entertainment industry with the ol’ tube steak biz.

McCarthy has an office on the Lower East Side. It is approximately the size of a freight elevator. In it are a desk, two chairs, a very mellow black Labrador retriever, a sculpture of a colon that was a gift from a friend. It’s where he goes to write scripts when he’s not acting or directing. He was nominated for an Oscar for the 2009 Disney Pixar animated film “Up.” When we met he was working another one for Disney called “Million Dollar Arm,” based on the true story of the first Major League Baseball player recruited from India, which explains the copy of “Baseball for Dummies” on his desk. One of the biggest draws of that project was traveling to India, where McCarthy had never been, for a three-week research trip. “It’s a crazy place,” McCarthy said. “The technology, the wealth and the poverty — the disparity is mind-boggling. It can be exhausting.”

So, you own a bunch of Papaya Dogs?

“I don’t know what that means.”

It means that you’re a silent partner in a chain of Papaya Dogs throughout the greater metropolitan area.

“That is absolutely not true. I wish it were. I would have a much bigger office. There would be a Papaya Dog right here.”

Then McCarthy pulled up to his computer to see what other misinformation he could find out about himself. Watching someone Google himself is a little like daring him to show you his browser history on the spot. In addition to an amateur interview that McCarthy doesn’t remember sitting for, Wikipedia and IMDB incorrectly listed his birthday as Jan. 30, 1966, when it was actually June 7, 1966. Another site said he lives in Boerum Hill in Brooklyn. Wrong again. It’s the West Village, for the time being. He’s looking for a new place with more space with his girlfriend, who has just moved from Los Angeles.

“It’s not all that interesting, is it?” said McCarthy, who is completely low-key and doesn’t seem like the type to elicit a vehement reaction from people. Although there was an incident during the filming of “2012,” the 2009 apocalyptic action flick starring John Cusack, when McCarthy was holed up in his trailer in Vancouver and decided to read some weird, personalized e-mails pressing him to check out a movie Web site. “It was like, ‘Hey Tom, check out our site!’ I was like, how do they know my name? And the Web site was like, ‘We are movie fanatics! Check out what we think about movies.’ And the number-one category was ‘We Hate This Guy’ with a picture of me with a big X through my face. I was like, ‘Have I really done enough for you to hate me?’”

He has, actually, if you hate tremendous success. McCarthy has 37 film and television acting credits to his name, many of them box office hits, such as “Meet the Parents,” “Meet the Fockers,” “Good Night and Good Luck,” “Syriana” and “Duplicity.” I’ve seen and enjoyed several of these films yet retain no memory of McCarthy either as their author or as a co-star in them. Blending into a supporting character seems to be his specialty. One of his more notable roles was as Scott Templeton, “a rat-faced double agent,” in the words of my colleague, on season five of HBO’s “The Wire.”

Another online profile of McCarthy says he’s “known for low-key films about disparate people who become surrogate families.” That may refer to “The Station Agent” (2003), about a dwarf, played by Peter Dinklage, who inherits a train station in a small town, and “The Visitor” (2007), about a lonely college professor who travels to New York City and finds a couple living in his apartment — both films that McCarthy wrote and directed to critical acclaim. They’re both melancholy and quirky, which is not at all how McCarthy comes off in person. He seems like the kind of guy I might have been friends with in college if I were 15 years older, since we both went to Boston College — a school not known for producing theatrical types except for Amy Poehler and Chris O’Donnell. Like Amy Poehler, McCarthy was part of “My Mother’s Flea Bag,” a campus improv group that used to perform in the cafeteria by the freshman dorms, and which I seem to have grossly underestimated. As far as I can tell, McCarthy lives the ideal Hollywood life away from Hollywood. After college, he went to Yale Drama School, where he met Paul Giamatti, the star of “Win Win,” his adorable and slightly sad movie about a small town lawyer-high school wrestling coach. It just finished a good run in the U.S. and is opening in Europe right now. McCarthy wrestled in high school, but he spent months researching the movie then co-wrote it with his childhood friend Joe Tiboni, a lawyer in their hometown who inspired Giamatti’s character. Then he cast his other friends Bobby Cannavale and Amy Ryan. “When you’re working with good friends, you’re like, OK, this is the greatest job,” said McCarthy. “You’re also working your butt off.”

But then he’s a movie guy. He gets to take a break, write, then make a little money in a normal workday. “I go to work at 9:30, I come here, I write, I take lunch, I work a little bit more, I go home,” said McCarthy. Nice work. “I do get offered a lot of big movies,” McCarthy said.