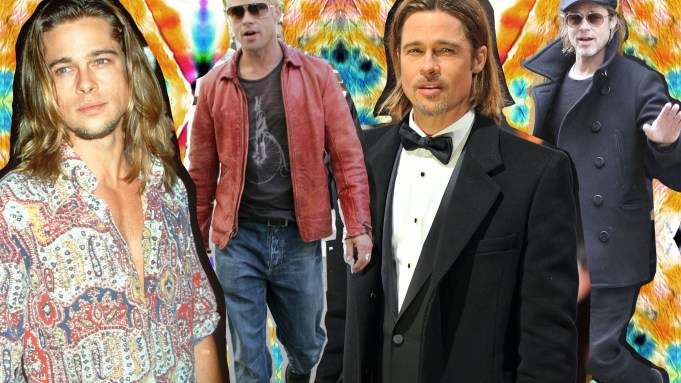 It all started at the Cannes Film Festival.

Brad Pitt, dressed in Brioni for the debut of “Once Upon a Time…in Hollywood,” was back on the red carpet once again, and had brought his signature style with him. The film has been a comeback for Pitt, not only in his career but in fashion as well: The actor was named the face of Brioni in mid-January. It’s the perfect marriage: one of the biggest style icons of this era and one of the originators of red-carpet dressing for men in Hollywood.

“We created a tuxedo for Mr. Pitt for the 2019 Cannes Film Festival and it was immediately a perfect match,” says Brioni’s Norbert Stumpfl. “Brad loves tailoring and the new direction the brand has taken. He epitomizes effortless elegance by wearing the finest clothes without caring too much.”

Of course, Pitt made his first fashion impact much earlier, specifically with “Thelma & Louise” in 1991. With a simple look of fitted jeans, no shirt, and a white cowboy hat, he instantly became a sex symbol and his celebration of Seventies cowboy immediately positioned him as a fashion player (and that look couldn’t be more relevant today).

Over time, he has morphed, style- and hair-wise, depending on the woman he was with. Every time he walked the red carpet with his then-partner, one could see the connection between his style and his emotions. With Gwyneth Paltrow, there was the commitment to matching haircuts. He was more polished at that moment — a look that continued with Jennifer Aniston, to whom he was married from 2000 to 2005. Even then, though, he maintained some of his own style rules: the beanie hats, the leather jackets (more high-end, in the Gwyneth and Jennifer days). With Juliette Lewis, the overall style was more grunge.

Then came the Angelina Jolie era, from 2014 to 2019, and he played part of the new Power Couple with sharply tailored moments and sleek old Hollywood glamour. Off-duty, though, he was more sloppy, with relaxed linen blazers and cream-colored pants.

Still, after 33 years on the screen big and small, it’s the 1999 film “Fight Club” that remains the most influential role style-wise. Yes, he is chicer now; yes, he is more sophisticated, but overall Pitt remains the epitome of bad boy sexy leading man — a role he played to perfection in “Once Upon a Time….in Hollywood.”

Last year, Lady Gaga was the actor everyone really wanted to see on the red carpet for her bold style statements. Pitt isn’t likely to push the edge of the fashion envelop to that extent — in fact, he’ll probably wear a classic Brioni tuxedo with a bit of a twist. Even so, for what he’s accomplished over his career — and what he’s done this year so far — he’ll be the one to watch Sunday night at the Oscars. Maybe this time his looks won’t get in the way of him taking home the trophy.