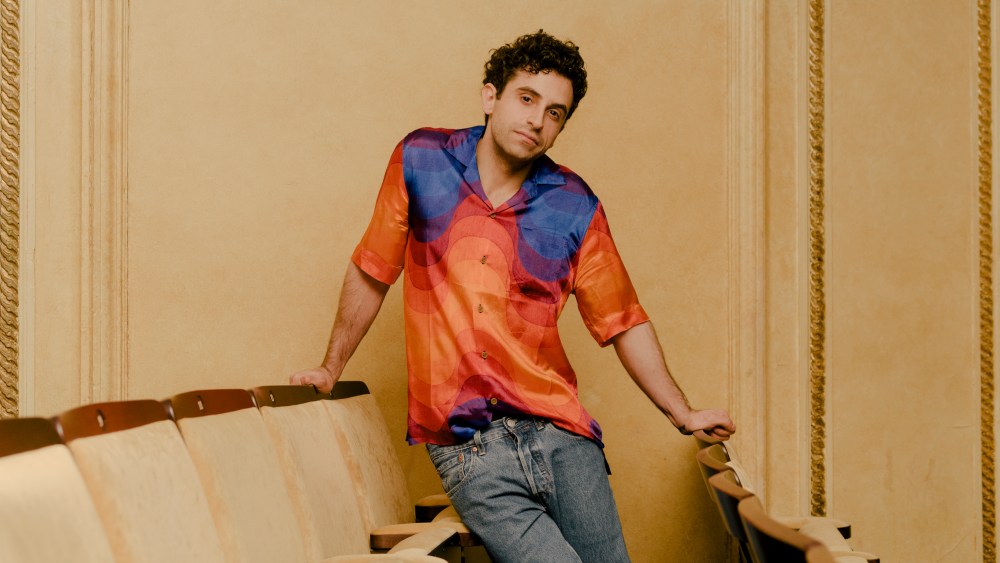 You’ve likely seen the promotional photos for “Burn This,” the latest Broadway adaptation of Lanford Wilson’s late-Eighties play that show a smoldering Keri Russell and Adam Driver cozily draped across one another, daring you to not find them dreamy.

The posters, quite frankly, are enough to attract ticket sales all on their own — and the performances by both actors are certainly worth the hype. But come for Russell and Driver and their chemistry and you’ll stay for Brandon Uranowitz, the delightfully witty, razor-sharp best friend Larry who brings humanity and depth to the production.

“When I first read ‘Burn This,’ I really related to Larry and the fact that he uses humor as a defense mechanism, as protection and armor,” Uranowitz says, sitting in the restaurant of the Millennium Hotel adjacent to the Hudson Theatre, on a recent pre-show morning. “I think that’s a very universal thing that a lot of gay men can relate to. I had a very strong magnetic connection to the character.”

Uranowitz, who has twice been nominated for a Tony (for “Falsettos” and “An American in Paris”) and joined “Burn This” straight from “The Band’s Visit,” grew up in New Jersey, close enough to come into the city and attend Broadway shows frequently as a kid.

“Because we lived so close to the city and ‘Peter Pan’ was playing, my parents took little three-year-old me to see ‘Peter Pan’ and my mom said she had never seen me look like that before,” the 32 year-old actor says. “I have weird feelings about fate and destiny and the universe, but I do feel like growing up so close to the city is sort of what locked it in for me, or sort of pushed me to discover the thing that I was passionate about.”

A drama major at New York University, he didn’t do any musicals until his last semester, when he ended up in the main stage musical.

“By pure luck, there was an agent in the audience at that musical who wanted to work with me,” he recalls. He decided to see where musical theater took him post graduation: “Theater’s a numbers game so there were more job opportunities, I guess,” he says. “And I could sing.”

But his heart has always been in plays. “When I was in high school I fell in love with Sam Shepard and Tennessee Williams, all the greats, and I hadn’t had the opportunity to do a play in New York, let alone on Broadway, and that was one of my major goals. I’d been doing musicals for years.”

“Burn This” is also the first time Uranowitz, who is openly gay, has played a gay character on Broadway.

“I came out and I was very open and proud about it and I wasn’t about to go back in the closet, I wasn’t about to start hiding all over again just for my career,” he says. “But you know, for film and TV producers, it’s all about money for the most part, and if they believe that a large portion of their viewership won’t believe that a gay actor can play straight, then they’re just going to cast a straight man. On Broadway and in theater, that’s not so much an issue. I do feel like in terms of acceptance, I think there’s an openness in the Broadway community to whoever comes in the room and nails the audition, that’s who’ll play the part.”

Playing a gay character on stage has been liberating for Uranowitz. “There’s a freedom in my work that’s new for me,” he says. “I’m not transforming myself in a way that is inauthentic to me.”

“Burn This” was originally published in 1987, and the open gayness of Larry was very much a novelty for audiences.

“They didn’t really have many reference points for an out, fearless, proud, unabashed gay man on stage or in a story, and I think Lanford Wilson was — I don’t want to say careful, because he is sort of unlimited and boundless in his writing — but I think he didn’t want to scare people away from this character, and so he made him extremely funny and made him the comic relief,” Uranowitz says. “And that still holds true but in 2019, after ‘Will & Grace’ and ‘Modern Family’ and all of these other projects and things where a gay character is very much a part of the story, it’s not so much a novelty for audiences anymore. So I really had to find his humanity and his truth.”

“Burn This” runs through mid-July, and Uranowitz mentions an interest in directing at some point in his near future. “But there really is no other thrill for me than being on stage. I’m very acutely aware of it during this particular project, for some reason. There will be moments where I find myself — and I have to snap back into it immediately — but I find myself on stage just being like, ‘I can’t believe I’m here doing this right now.’ I’ll have that ‘pinch me’ moment in the middle of a scene — which is not helpful — but yeah.”