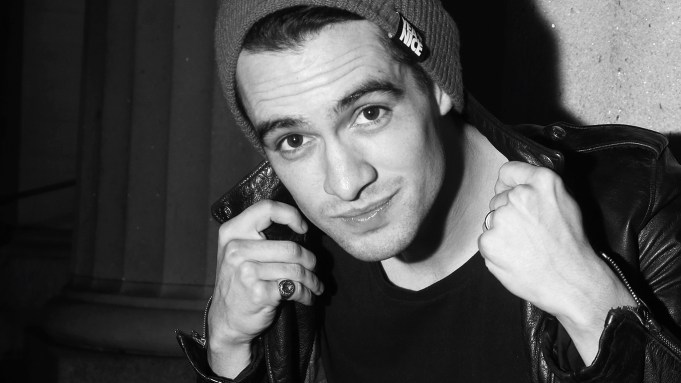 “What’re we drinking?” Brendon Urie asks as he ducks into a cushioned booth in the bar of Manhattan’s Royalton Hotel. The Panic! at the Disco frontman is in New York preparing for the January 15th release of his band’s latest studio album, their fifth. This time around, though, things are a bit different: he’s now the only remaining original member of the band.

“My capacity for wanting to create has never faltered,” Urie, says, having settled on Woodford Reserve and soda. “If anything, it’s gained momentum.”

The new album, titled “Death of a Bachelor,” marks a decade of Panic! Founded in 2004, when Urie was 17 years old, Panic! was originally comprised of four members: Ryan Ross, Brent Wilson, Spencer Smith and Urie. Ross and Wilson departed in 2009, and by 2014, Smith was “kind of hinting about wanting to leave,” Urie explains. He, on the other hand, has “never wanted to leave this band. And this band has gone beyond my dreams for what I ever imagined creating.”

Urie was born into a Mormon family in St. George, Utah, and due to his dad’s surveying job, moved to Las Vegas at age two — “which sounds odd but Las Vegas has a really large Mormon population,” he says. “I think they’re trying to convert all the sinners in Vegas.” His mother raised him on musicals like “Seven Brides for Seven Brothers” and “Oklahoma!” with the occasional trip to see Blue Man Group. “That had a huge impact on me,” he says.

He gradually moved away from his Mormon faith, and at 17, right when Panic! had been signed and was preparing to head out on tour, he leveled with his parents: “I told them ‘I love you too much to lie to you’ and I told them what I believe and what I don’t believe and that this band was my religion and I wanted to pursue it,” he says.

Identifying their sound took some work. “On the first album we were trying to do a pop-punk album with a classical influence,” Urie says, though music critics thought otherwise. “We’d say ‘pop-punk’ and people would say ‘no you’re like burlesque-cabaret-punk’ or ‘it’s baroque-pop’ and we were like, ‘that sounds way cooler.’”

Early Panic! was also influenced by Urie’s love of movie scores. “Anything from Hans Zimmer to John Williams — I love every one [Williams] has done: ‘Indiana Jones,’ ‘Jaws,’ ‘Superman,’ ‘Harry Potter,’ ‘Star Wars.’”

This indescribable combination — a bit of Fall Out Boy here, some Beyoncé there — is what Urie delights in. “When you can’t put your finger on it, that’s the most exciting stuff,” he says, drawing inspiration from The Weeknd and Kendrick Lamar, artists he says “reinvigorate the hope that we as artists seek.”

The first taste of new Panic! came on April 20, when Urie surprised fans with the release of his single “Hallelujah.” Any fear of listeners not taking to the new material was silenced, as the song became Panic!’s second-highest charting single, behind 2005’s “I Write Sins Not Tragedies.”

The album was written at his house in L.A., “just me, at the piano, trying to make a Sinatra album,” he says — a perhaps surprising mission to those listeners who closely associate Panic! with the emo genre that dominated music in the mid 2000s. Nonetheless, Urie describes his new sound as “this weird kind of Sinatra, kind of Beyoncé thing — you know, the obvious mashup.”

With fewer members comes creative freedom, and Urie, now 28, set out to make a record with “no rules.” “On ‘Death of a Bachelor,’ there are songs I did where vocally I played eight different characters,” he explains. Those range from“the fat lady who sings at the opera,” to “the viking,” to “the Chinese chancellor” — exactly what this all means remains to be seen.

The album title hints — strongly — at the new phase of life Urie is in. Two years ago he married his longtime girlfriend, Sarah, whom he met outside Panic!’s tour bus in Detroit. “‘Death of a Bachelor’ made sense because I’m married now,” he says. “I thought married life would get a little duller, be more comfortable, but it’s not — so I wanted to showcase that.” He and Sarah, an aesthetician, live in the San Fernando Valley with their two dogs, a Jack Russell and a Boston Terrier, and won’t go more than three weeks without seeing one another.

“Death of a Bachelor” is also a celebration of where Urie finds himself now, a decade after those high school jam sessions. “10 years ago I never saw this band where we are. When we were 17, 18, we were touring in a band, and I thought that would be the case for 15+ years,” he says. “I thought we’d be playing small gigs, coffee shops, bars, wherever we could play.”

World tours, a double-platinum record and an MTV Moon Man later, that proves not to be the case. And Urie shows no signs of slowing.

“I always want to keep challenging myself to do something that I don’t even have the foresight to know what it’s going to be,” he says. “It gives me anxiety, it gives me excitement, I don’t know.” Though Panic! has seen many a change over the years, the excitement Urie describes is the one constant — right down to the enthusiasm conveyed in their signature exclamation mark. “It went away for a little bit and I was bummed to see it go,” he says with a smile. “And now its back and it’s here to stay.”