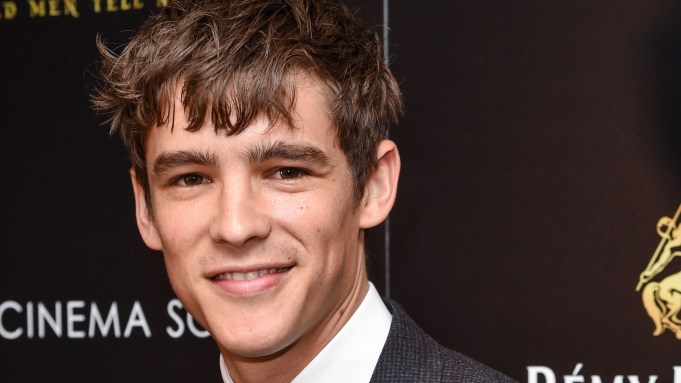 Australian actor Brenton Thwaites is set to have a lot more eyes on him when the fifth installment of “Pirates of the Caribbean” is released on May 26. The 27-year-old actor discussed his “Pirates” role, working with his A-list costars and the enduring appeal of megaproducer Jerry Bruckheimer during a recent screening at Crosby Hotel in New York.

On working with Orlando Bloom, his father in “Pirates”: “I was dying to hear what our dynamic was on the first three movies — we only really had one day together where we could work together and show the audience what our characters feel toward one another. The scene didn’t really call for it — it was a climactic scene, a scene of coming together and revelation. We thought it was more about a son coming together with his father, and leaving it at that.”

He’s admired his costars for many years: “Johnny [Depp] and Javier [Bardem] are actors I’ve admired for so long in my career, for years and years, since I was a boy. To get the chance to see them work together was amazing. When I was in a scene with these guys, you learn a lot, you feel a lot, and you learn to improvise and be irreverent. When you’re watching greats like Geoffrey Rush and Johnny Depp work together, it’s like watching a play that won’t happen again. It’s a real gift.”

On watching the first “Pirates” film as a teenager: “I was 14 — I saw it in the theater. I remember being fascinated by the moonlight effect with Geoffrey Rush’s character. He’d pop out into the moonlight and turn into a skeleton; he’d drink the wine, and it’d go all through his gizzards. I remember thinking that was a great effect, and how scary it was at the time. Now, we’d look back and go ‘Oh, it looks kind of dodgy.’ But at the time it was the forefront of CGI technology and cutting edge.”

The appeal of the “Pirates” series: “In my youth I was always following the franchise, because they’re always bringing that new, cutting-edge technology to their films, mixed with fantastic actors, great story plot, and interesting supernatural and comedic and romance elements. There’s kind of something for everyone.”

On working with Jerry Bruckheimer: “Jerry’s one of the few creative producers around. He’s a producer who acts on instinct. He’s old school in the sense that he has the upmost respect for actors — I’m an actor, so I love that. I think it’s slowly dying, and I see the benefits of it, especially with a film like this. But after all of this, he’s a guy who’s made so many fantastic movies, he’s very experienced, he loves this franchise, and it was an honor to work with him.”

Thwaites has more films in the works: “I have three movies coming out: ‘The Interview With God,’ another called ‘Office Uprising’ and another called ‘Ghosts of War.’ The first one is a story about a guy who claims to be God, and he’s interviewing him to find out whether he is or not. The second is an office horror comedy about these three kids who find out all of their coworkers have turned to zombies, and they have to find office implements to basically survive and save the day. The third is a movie I just wrapped in Bulgaria from writer-director Eric Bress. A supernatural thriller about these five soldiers in WWII trying to protect this chateau in France, and they come upon supernatural forces. Three very different independent movies, a lot of fun in their own right, very different material.”