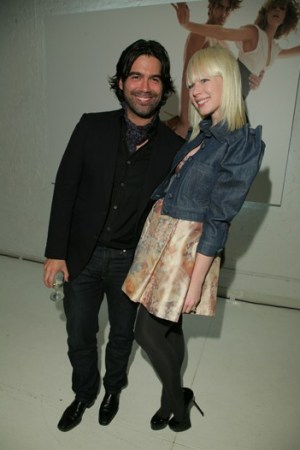 Very few things these days seem to be done just for the heck of it, especially if they cost money. And yet accessories designer Brian Atwood is giving away copies of “Role Play Rene,” his new glossy coffee-table book that features photographs of Rene Russo in his spring collection of stilettos. Business must be good. “It is,” he said at a party Thursday night at Openhouse Gallery in New York, smiling but not elaborating.

Celebrity photographer Tony Duran shot the sexy photos, which were styled by Kithe Brewster, who also works with Kate Beckinsale. One thousand books will be printed and handed out to those who Atwood feels will appreciate the work.

Among the lucky recipients will likely be hostesses Byrdie Bell and Julia Restoin-Roitfeld (who, spies say, played hooky and hit the Fleetwood Mac concert instead), as well as guests Poppy Delevigne, Lisa Airan, Jennifer Creel and Katie Lee Joel.

Russo herself was absent in New York, but she was in attendance a few nights earlier at a party for the book in Los Angeles. Rachel Zoe and Cameron Silver, who met Atwood when he was working at Versace, came out to the Sunset Tower Hotel along with China Chow, Jacqui and Rosetta Getty, Crystal Lourd, Jamie Tisch and Jenni Kayne. Russo and Atwood didn’t meet until the shoot day, which she described as “a great day. It just came together like a surprise, no pressure, we just had a good time.”

On Thursday, Angelenos dumped their jeans and leather jackets for Katie Brunini’s exhibit-slash-birthday party. Roseark’s Kathy Azarmi Rose told guests to show up in Twenties opera attire and they obliged. Marisa Tomei donned a Yves Saint Laurent-designed Christian Dior dress. “He only designed for Dior for a couple of years, so this dress is extra special,” she said.

“I’m in vintage heaven tonight,” said Liz Goldwyn who unearthed a pair of tie-on sleeves that she found at a flea market.

“It really feels like we’re in a Twenties salon,” said Erin Wasson. “I could get used to this.”