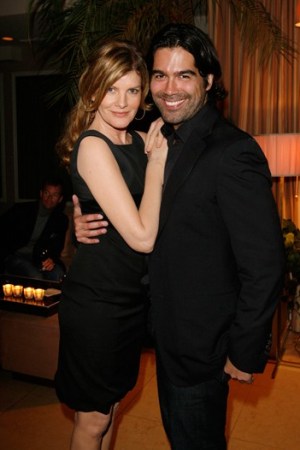 Brian Atwood kicked off the celebration of his new look book, a hardcover edition featuring Rene Russo photographed by Tony Duran, with a dinner in Los Angeles on the terrace of the Sunset Tower hotel.

Atwood’s longtime pals Rachel Zoe and Cameron Silver, who met the designer back when he was working at Versace, came out along with Molly Sims, China Chow, Jacqui Getty, Crystal Lourd, Jamie Tisch and Jenni Kayne.

The star of the book, Russo, kept a low profile at the end of the long table, where she admitted, “I don’t really like to take pictures so much anymore but I love working with Tony. Truthfully I like to stay home, watch ‘Hardball with Chris Matthews’ and just sort of chill.”

Russo and Atwood didn’t meet until the shoot day, which she said, “just came together like a surprise, no pressure, we just had a good time.”

After dinner, the hotel staff immediately began dismantling the long table to make room for the next bash: the post-premiere party for “I Love You, Man.”

Elizabeth Banks and Ben Stiller arrived before the cast “because we self-drove. We didn’t want to deal with valet,” said Banks. There was serious VIP gridlock all evening; as the movie cast was arriving, Gov. Arnold Schwarzenegger was just finishing dinner in the adjoining Tower Bar restaurant with Sean Penn.