Catching Up With ‘Bridge and Tunnel’ Star Caitlin Stasey

The Australian actress stars in Edward Burns' miniseries, which premiered in late January.

A still from the series.

Ed Burns’ latest creation, the six-part miniseries “Bridge and Tunnel,” has been on a fast-track trajectory. The show, which premiered late in January, is halfway through its run — after a quick turnaround from filming this past November.

Caitlin Stasey, who previously worked with Burns on his feature film “Summertime,” got the call from the actor-director in early fall that he was pitching a series with her at the forefront. The Epix series shares a lot of DNA with Burns’ earlier film; both are set in working class Long Island during the summertime in the early ’80s. And both projects focus on a group of young adults, on the precipice of true adulthood.

“[The show] is very visually appealing; it’s beautiful. It has old cars and vintage fashion,” says Stasey, who earlier starred on the popular Australian soap “Neighbours” and historical romantic drama “Reign.” Stasey stars in the Epix series as Jill, a recent college grad who dreams of becoming a fashion designer in the city. The series is nostalgic, and intentionally light. “It doesn’t really combat anything too divisive — it’s just about kids in Long Island.”

Although Stasey is unsure of her next project amid the pandemic, she finds herself gravitating toward directing. She recently directed a few short films for recently launched woman-led erotica site Afterglow, which is rooted in a Millennial aesthetic and message of female empowerment. “It’s a queer-run and operated company. It’s a very cool group of women making some very good stuff,” she says. “We were all set to make several films in February, but things have gotten really, really dicey out [in L.A.]. And making a regular film during COVID-19 is tough — making a pornographic film during COVID-19? Virtually impossible.”

Below, Stasey discusses her role on “Bridge and Tunnel.”

WWD: In terms of your character, Jill, what did you find resonant about the questions she’s asking, and about her premise?

Caitlin Stasey: Jill is incredibly grounded, and I really have so much respect for her. She’s unfailingly honest throughout the entire series, and she communicates really effectively. She does exactly what you want someone to do in her situation, which is to say: “this is what I want, this is what I’m going to do. In the meantime, if you could do this…” There’s not a lot of fraught interactions with her. She and [Jill’s love interest] Jimmy fight. They have opposing visions of the future, especially when it comes to one another and their relationship. But she’s not fickle.

She’s obviously very determined. I really appreciate that. Even at a time when things were less accessible, she was dreaming big and thinking about the world. And thinking about how to get involved in it, even though she felt very tied to home.

And you know, I had similar aspirations. I moved to L.A. when I was 18, and I had a boyfriend from high school that I was obsessed with, and I didn’t want to leave him behind. And I look back on it now, and I audibly gasp at the choices I nearly made. But I can fully understand them. When you’re young, the number of experiences you’ve had are pretty limited, so each of them feels really, really impactful. If you’ve been with someone since you were 14 and you’re 20, that’s a great chunk of your life to spend with someone.

WWD: You worked with Ed Burns previously on “Summertime.” At what point did he reach out to you about the show and the character of Jill? What sorts of conversations did you have with him about the story he wanted to tell?

C.S.: I got a call from Ed in September or October. He’d been pitching the show with me at the center of it, which I didn’t realize. I was the only member of the cast before we got into casting the rest. And so he called me, kind of out of the blue one day, and was like, “Do you want to do this show with me?”

I love Ed; I think Ed is such an industrious and determined and creative person. But this industry is so mercurial and so unpredictable and so disappointing, so at the time I was like, “Uhh, yeah, Ed I’d love to do this show with you. Call me when it’s real.” I’d just gone through an experience where I was — I wasn’t kicked off a project, but I kind of was [dismissed] — so I was feeling a little disheartened and insecure. And then he came to me and asked if I wanted to do it. And I called my agent and said, “I think I have a job, I don’t know. Can you find out if it’s real?”

WWD: You guys filmed during the pandemic. What was it like working as an actress during this time? Did the pandemic affect your process at all, or certain restrictions?

C.S.: It definitely did, because it meant the timeline was significantly shorter. A great deal of the money we were going to spend to make the show, got turned into COVID-19 preparedness. And therefore I think time got cut short, sets got cut short — we were supposed to go into the city — and so everything became Long Island-based and centric. And that affected me just in the sense that you get to set, and you generally get to make an episode of television over the course of about, give or take, eight days. We had to do it so much faster. We made six episodes in five weeks, which is just wild.

The thing about being an actor, too, as unfair as it is, everybody is very, very conscientious about your comfort and your safety. Your feelings and your physical self are often prioritized above all other things on set — and it’s because no one else can do your job. More than ever, you felt that sense of division between you and your crew. And usually sets are such communal places. People touch you all day. From sun up to sundown, I have about four different hands on me — tying my buttons properly, putting my hair back, trying to conceal the dark circles under my eyes — and we didn’t have that. It was sort of like a play.

I think the crew more than anyone struggled because they had to be wearing their personal protective equipment from sun up to sundown. [The actors] got to take our masks off to be on camera. And so yeah, it sucked — but it also sucks less than being anywhere else.

WWD: The show is a period piece — the 1980s. From a hair and costume standpoint, how did those elements help you get into character and get into that mind-set?

I really do think the hair ties together all things. We’ll look back over certain decades and the clothes that we’re wearing, they’re very specific to that time, but they’re not so ’80s that you wouldn’t see them on someone now. There were outfits that I was wearing throughout the show that I own parts of now, all my jeans are high-waisted flared leg. You know, I will not do low rise, skinny jeans, again — I suffered throughout my teens with those. And I will not bend to meet them the second time around.

It’s the hair. It’s so funny how that is the one part of a photo or the memory where the time is the most obvious. We look at Princess Diana, for instance: her hair is the most iconic time stamp of where she was during her life. 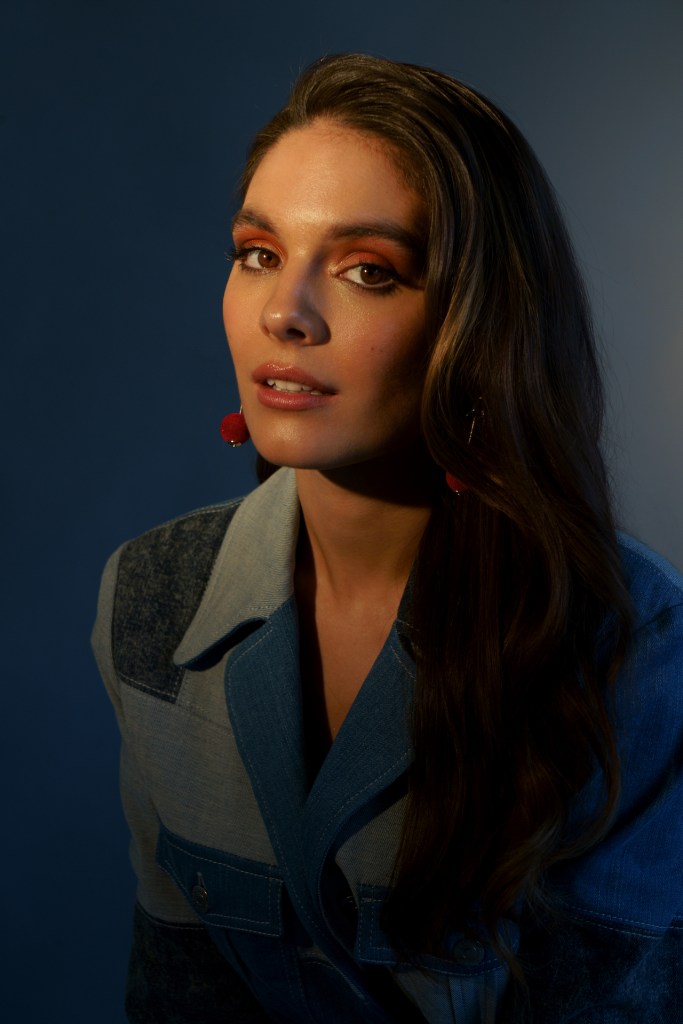