Lundy-Paine stars as Billie, a mini-me to Keanu Reeves' Ted in "Bill and Ted Face the Music."

When the first two “Bill and Ted” films came out in theaters, Brigette Lundy-Paine hadn’t yet been born.

“I hadn’t seen the films, I had not even heard of it, I don’t even know how. But it had completely missed me,” says Lundy-Paine, who recently decamped a few hours from New York City upstate to a friend’s family home. “And so I watched a little bit of a clip before the audition just to get the voice, and as soon as I saw it I was like, ‘I’m into this, this is amazing.'”

Lundy-Paine stars in the third installment of the beloved dude-com franchise starring Keanu Reeves and Alex Winter. The third film’s been a long time in the making, with Reeves and Winter acknowledging a script starting in 2010. Fans have had three decades to anticipate what the pair have been up to since the last film, and they’re excited. “Two weeks ago I was in the park and heard two guys talking about it coming out, and I had to stop myself from being like, ‘I’m in that!’ I was just clocked, people are excited,” says Lundy-Paine.

The 26-year-old actor stars as Ted’s daughter Billie — a mini-me version of Ted, down to similar mannerisms and body language. Billie’s relationship with Bill’s daughter Thea (played by Samara Weaving) also mirrors that of their fathers — a “goofy, beautiful, friend love story.” In “Bill and Ted Face the Music,” the future of the universe depends on the youthful pair, and it depends on unity and community — a message that 2020 needs more than ever.

Lundy-Paine, an NYU grad, is best known for their role in Netflix’s series “Atypical,” and has also appeared in films like “Bombshell,” “Irrational Man” and “The Glass Castle” in recent years. The actor identifies as gender nonbinary, and is gravitating toward roles that reflect that — including “Bill and Ted.” 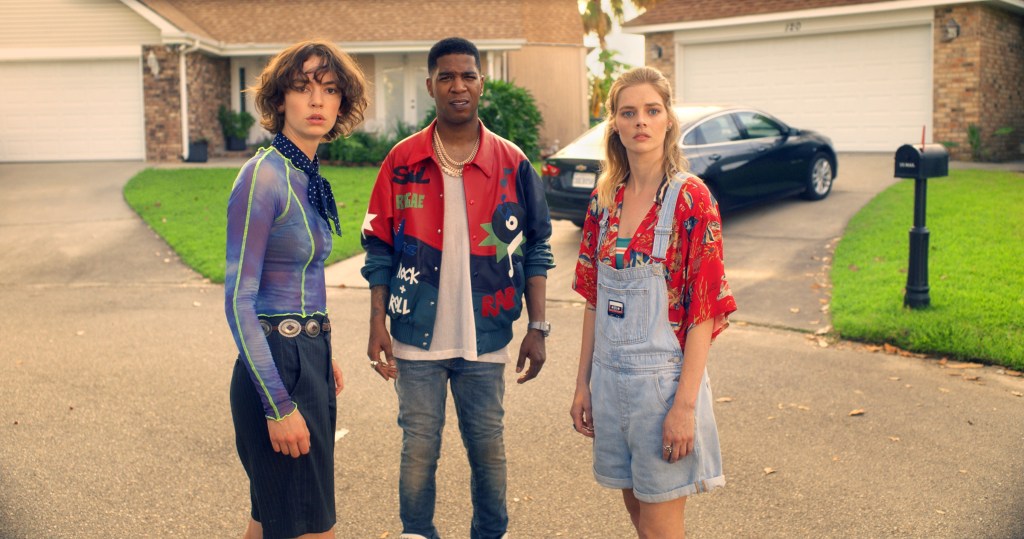 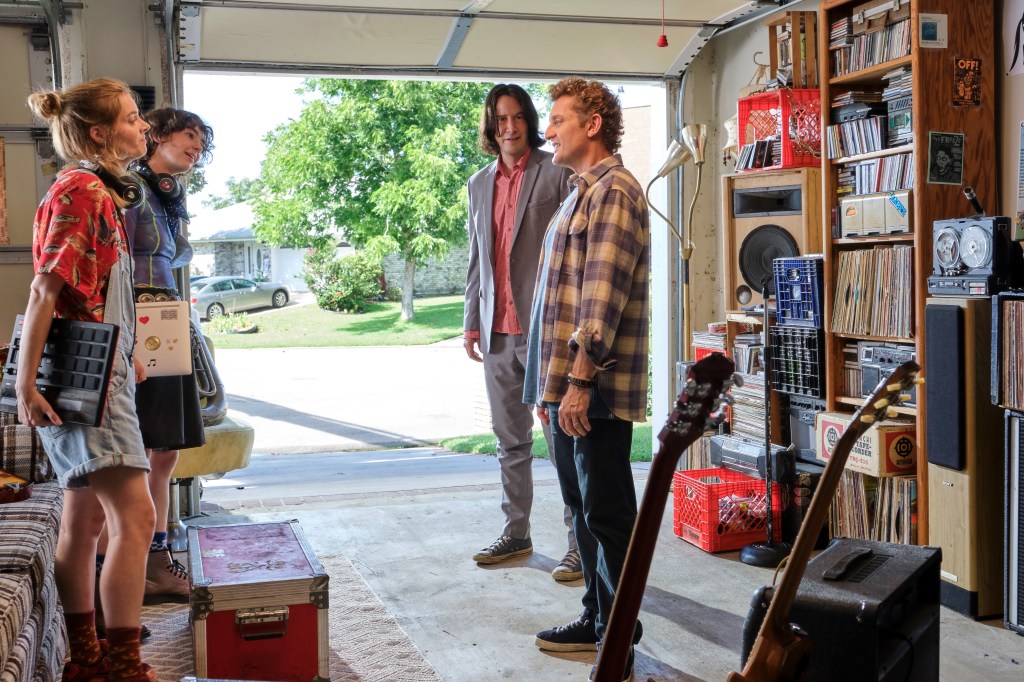 “I sort of wormed my way around not being super gendered in the roles that I play, and ‘Bill and Ted’ felt like a very natural next step. It’s just such a dude movie — and I don’t mean dude in a gendered way, I just mean dude as a culture, and dude culture is ungendered,” says Lundy-Paine. “The ‘Bill and Ted’ universe is definitely nonbinary.”

Dude culture also tends to be a specific form of comedy: it’s not subtle, and it’s earnest.

“It’s a rare thing, too, in comedy now, because a lot of it is irony and underplaying things and this gloomy sarcasm, or like really absurdist but nonsensical stuff,” says Lundy-Paine. “We talked a lot about that with Keanu and Alex, they were like ‘we always take these characters seriously, whatever Bill and Ted want we’re 100 percent behind it, you’re never laughing at them.'”

Lundy-Paine grew up in California in a creative family of performers, directors and artists. “I have a spazzy brain, I need to be doing a million things at once, and I really got that from my parents,” says Lundy-Paine. “I was raised in a creative household of as many projects as you can handle is what you should be doing.”

One of those projects is Waif, a punky artsy online magazine they founded along with several friends, who are also all in an improvisational voice band together called Subtle Pride. This fall the magazine is launching Waif TV, a filmed version of the magazine. “The magazine is made up of different waifs around the world sending in their content,” says Lundy-Paine. There’s going to be a news segment, reality show segment, and an interview portion; “a piece of wood” is one of the subjects. “Just simple things like that to keep the waifs entertained.”

(Waif isn’t clearly defined, although the most recent issue offers some examples of things that qualify as waif: zit scabs, gardening, talent shows, arms that jiggle like hot Jello, Kix and Special K — but not Trix. It seems that “waif” is whatever someone wants it to be.)

For the past few months, the actor has been consistently attending Black Lives Matter protests, going to teach-ins and sit-ins, and helping friends who run food pantries. Other than one Instagram post about “Bill and Ted,” their feed the last few months has been mostly dedicated to sharing activist resources and information.

“I think social media is so funny because it feels in a way pointless because if everyone’s screaming the same things, then what are we listening to? But I think that it does have a real function of sharing and being consistently exposed to a reality and a well of information,” they say. “If more people are continuing to share the information about it then we know there’s no way that we’re going to be told that it’s over. We have to hold ourselves and our neighbors accountable.”

“Atypical” will return for a fourth and final season next year, and Lundy-Paine is waiting to find out when it’s safe to start filming; the show shoots in L.A. As for what projects the actor will end up in next, Lundy-Paine offers that they hope to work with “queer, compassionate, freaky people who have no interest in making money.

“It would be nice to, but I like people who are in their own world,” says Lundy-Paine, adding that they’ve been able to connect with some people who fit that description.

“The thing about this business is you go where you need to be. Who knew I’d be in ‘Bill and Ted?’ I didn’t even know what it was. But now I’m here, and I’m in it, and whatever’s going to happen next is based on whatever weird way time has moved through my life.” 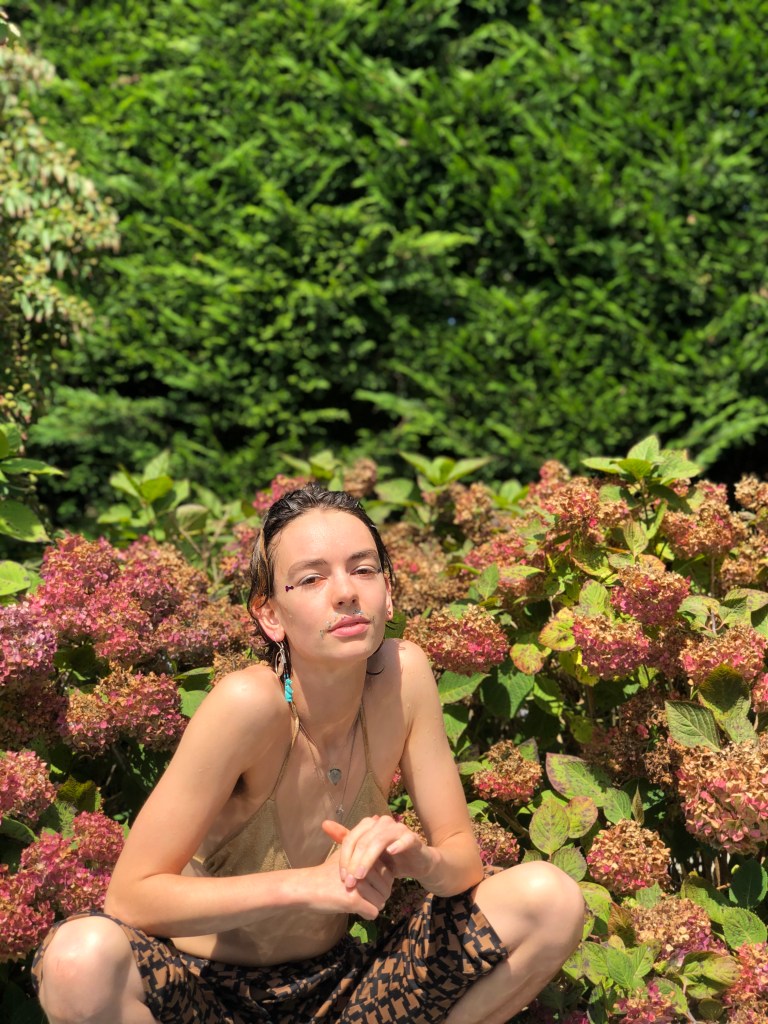