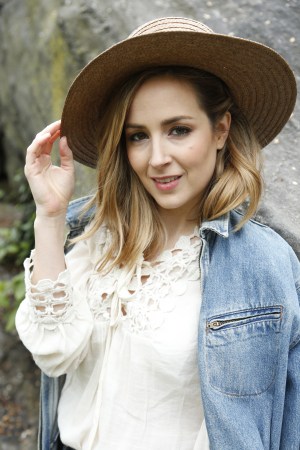 “I’ve been calling this year ‘two-thousand-and-sweet-sixteen’,” says Hannah Elless, over churchbell chimes, perched on a park bench in Central Park. The 29 year-old native of Kalamazoo, Mich., is appearing in her second Broadway production, the bluegrass musical “Bright Star,” with original story and music by Edie Brickell and Steve Martin — a fact that has yet to sink in for Elless. “Is there anything better than Steve Martin writing a joke for you?” she says. “What kind of life is that?”

“Bright Star,” which has its digital release Friday, brings the Blue Ridge Mountains of North Carolina to Broadway, and alternates between the Twenties and the mid-Forties — allowing Elless to inhabit the screen sirens she grew up idolizing. “Honestly I grew up watching women onscreen who were in these movie musicals, like “Oklahoma,” “Carousel,” and “State Fair,” and these women were winning Oscars and doing musicals at the same time,” she says. “And so I grew up thinking, ‘You could do that, you could be in musicals and win Oscars and look glamorous at the same time.’ Who doesn’t want to be Rosalind Russell?”

Elless approaches everything with a hint of fairy-tale dusting over it. “I come from land and trees and lakes and sky,” she says of her Michigan upbringing. Bluegrass, too, was part of the equation. She plays six instruments, a skill that developed from filling in for her brothers’ band sessions. “I grew up playing bluegrass and we had this gag where everybody would pass an instrument to your left,” she says. “We always had a piano in the living room and there was always a jam session going on. And it’s been a huge part of my life and it’s gotten me to where I am today, essentially, because I’m doing a show that has bluegrass music. You can’t imagine all the tools in your life coming together on one project, but sometimes they do.”

After graduating from Western Michigan University, where she studied theater and earth sciences, she spent time doing Shakespeare in Chicago before coming to New York. She booked “Godspell” after her first Broadway audition, in 2012. “They needed someone who had improv training and who play instruments, and that was me!” she says.

She found her way to “Bright Star” after an audition, something she says never happens. “It was one of those moments where time stood still and when it was over I was like, ‘Did I remember to breathe?’” she recalls of her audition, where she sang the bluegrass song “Orphan Girl.”

Oh and by the way, Steve Martin lives up to the hype.

“Working with Steve Martin has changed my life,” she says. “He’s a jack of all trades. He’s been able to star in films, write books, tour with his band, create albums of music, write plays, write scores, curate art, and I love that. What can’t this man do? And on top of it all, he plays banjo.”