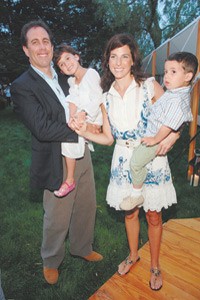 Amir El-Masry Wants Viewers to See Themselves in ‘Limbo’

“It’s a joy to have you all out here — and not in our house,” joked Jerry Seinfeld to a crowd of guests who had gathered on his expansive lawn in Amagansett for an intimate tented dinner. His wife, Jessica, organized the Saturday night soirée, sponsored by Gucci, for her Baby Buggy charity, which she founded five years ago. Sarah Jessica Parker, Narciso Rodriguez, George Stephanopoulos and wife Alexandra Wentworth, along with a slew of mummies — including Heather Mnuchin, Marcia Mishaan, Dayssi Olarte de Kanavos, Delphine Krakoff and Stephanie Winston Wolkoff — supped on heirloom tomatoes, grilled lobster tails, roasted chicken, summer corn succotash, haricots verts and finished off with an enormous peach and raspberry cobbler.

The Seinfelds gamely traded zingers. Jerry proclaimed, “When I first married my wife, I had no idea she could do things. I had no idea we were going to have a party until I looked out the windows and saw the tent.” Jessica responded by thanking the myriad supporters in attendance for contributing to “my little charity, as Jerry calls it.”

After dinner, party-goers retired to the old cedar barn on the property, where Seinfeld had parked his antique Porsche-Diesel tractor for everyone to see — the highlight of the evening, to be sure, for all the gentlemen guests.

Back in the city at Soho House last Wednesday evening, Pravda Vodka hosted a screening of “Wendybird,” Ellen von Unwerth‘s short film, starring Kirsten Dunst and a bevy of nymphs in designer Erin Fetherston‘s fall collection. A gathering of artsy types and downtown girls, like Arden Wohl, Genevieve Jones and Minnie Mortimer, came out to swill vodka. Julia Restoin-Roitfeld, soon off to Ibiza on vacation, has known Fetherston since their high school days in Paris.

“But I haven’t had a chance to wear her clothes…yet,” she offered slyly.

And girl-of-the-moment Fetherston, who has recently been out and about everywhere from L.A. to her hometown of Paris, made it clear she’s more than just a partying fashion type. She’ll be showing this fall at the UPS tent and is planning an exhibit of portraits of PYTs in her frocks for the Paris collections.

That same night on the West Coast, Jacqui Getty, Kelly Wearstler and Gretchen Mol hosted a party for Chanel’s luxury skin cream, Sublimage, at the Terrace restaurant, where many of the guests, including Diane Kruger, showed up clad in classic black and white Chanel to match the all-white custom decor. Except, that is, for Rachel Bilson and Gia Coppola, who scored bright red dresses, and Wearstler, who chose a green-gold lamé number with sparkly cuffs to match. “I’m very popular right now with my sons, who think I am a superhero,” Wearstler laughed about her outfit.

After dinner, Heather Graham, Alexandra von Furstenberg, Maggie Q, Jaime King and others stuck around for cocktails by the pool, where they were joined by the next wave of party-goers, who included Dunst. “I guess you are never too young to start with the face cream,” quipped one guest.