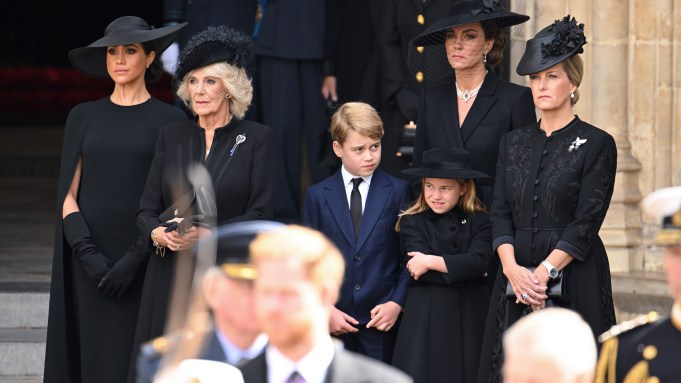 LONDON — Everyday life in Britain came to a standstill Monday as world leaders, royal families, and members of the public, many of whom had only ever seen Queen Elizabeth II in pictures or on TV, gathered to watch her funeral service and say a final goodbye.

In the London parks they crowded around giant screens to watch, pray, sing and applaud. Later, they crowded into the streets of west London to watch the hearse carrying her to Windsor Castle, where a private burial took place in the evening.

The funeral day was the biggest security operation that London had seen since the 2012 Olympics, with most of the world’s leaders, and Europe’s royal families, gathering at Westminster Abbey, wearing black, pearls, hats and veils.

Many paid tribute to the queen by rewearing outfits or jewelry with special meaning.

Queen Rania of Jordan was wearing the dark coat dress that she originally donned to meet the queen and Prince Philip in 2001.

Queen Máxima of the Netherlands wore a diamond and pearl brooch on the right side of her belted coatdress, a nod to the British royals who have worn pearls for mourning since the days of Queen Victoria, who wore them with her all-black outfits following the death of her husband, Prince Albert. Pearls are thought to represent purity, but also tears.

Catherine, Princess of Wales wore a black Alexander McQueen coat dress with a black hat and a netted veil. She completed that look with the queen’s Japanese pearl choker, made from four strands of pearls joined by a diamond clasp.

The pearls were a gift from the Japanese government that the queen had commissioned into a choker inspired by her daughter-in-law, Diana, Princess of Wales. The queen wore the choker for the first time in the early ’80s, which was later loaned to Diana in 1982 for a state visit to the Netherlands.

Middleton wore it for the first time in 2017 to the 70th wedding anniversary dinner of the queen and Prince Philip.

Earlier this week she wore the queen’s favorite pearl necklace at a luncheon held for the Commonwealth nations at Buckingham Palace along with the queen’s diamond and pearl earrings.

London was quiet on Monday morning before the funeral began, with only a few shops and cafés open. The day had been designated as a national holiday and many central London retailers made the decision to shut.

A number of screens were set up in Hyde Park, across London and the rest of the U.K. so that members of the public could follow the funeral service, which was livestreamed.

On the roads around central London dozens of city workers were helping direct the flow of people to the various screening sites. Despite the large crowds, everything was organized and calm. The English are known the world over for their ability to wait patiently and form a queue — a characteristic they displayed more than ever in the so-called, miles-long “The Queue” formed to view the queen lying in state in the abbey.

On Monday, there were lots of families and children along the route, people wearing the Union Jack flag, and others carrying bouquets of flowers for the queen. Tourists, phones in hands, filmed their surroundings alongside the multiple journalists, photographers and broadcasters who were reporting live.

In Hyde Park, thousands of people gathered to watch the funeral. People were asked to sit on the ground to allow those behind them to watch. People chanted, prayed and sang, and the mood was quiet and respectful.

In Hyde Park, those watching the funeral also observed the two minutes of silence at the end of the funeral and then broke into applause right afterward. Some sang “God Save the King” and cheered.
A young couple, Maisie and Tommy, came to London with their two small children. They told WWD they weren’t sure what to do exactly, but knew they wanted to be in London and watch the funeral surrounded by others, and not at home alone. It was the first time their kids saw the British capital.

That seemed to be the thought process for many people. They didn’t know exactly how to participate in such a historical moment, but felt they needed to be in London and come out in person to say farewell to the monarch.

On Sunday, on the eve of the funeral, the royals also released a series of tributes to the queen, including an unseen portrait of her. The image, by Ranald Mackechnie, was taken at Windsor Castle before the queen’s Platinum Jubilee celebrations. She’s wearing a light powder blue dress with aquamarine and diamond clip brooches, which were a present from her father King George VI for her 18th birthday in 1944.

Later on Sunday evening, Camilla, Queen Consort paid tribute to the queen in an ITV broadcast, recalling her “wonderful blue eyes, that when she smiles they light up her whole face. I will always remember her smile. That smile is unforgettable.”

The queen’s granddaughters, Princess Beatrice and Eugenie, the daughters of the Duke and Duchess of York, released a statement remembering the late monarch on the eve of her funeral.

“We’ve not been able to put much into words since you left us all. We, like many, thought you’d be here forever. And we all miss you terribly. You were our matriarch, our guide, our loving hand on our backs leading us through this world. You taught us so much and we will cherish those lessons and memories forever,” their statement said.