Gordon Brown, David Cameron and Nick Clegg are dressing not for comfort or style — or even to please their wives — but for victory. 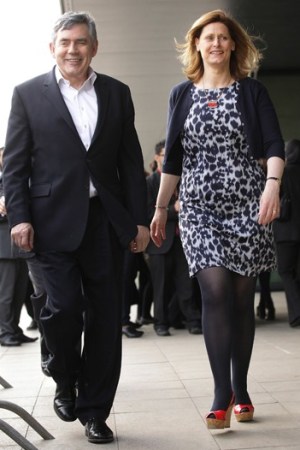 LONDON — There’s a week to go before the British public takes to the polls on May 6 in what is shaping up to be the most hotly anticipated election since Labour buried the Conservatives in 1997. Tension is hanging in the cool spring air with the threat of a hung parliament — and all the uncertainty that would bring. Meanwhile, a Barack Obama-esque underdog has emerged in the form of Nick Clegg, leader of the Liberal Democrats, the center-left party that’s the third largest in the House of Commons.

But while their parties may differ on policies such as education, the state of the National Health Service and how to treat the big banks, all three candidates seem to have one thing in common: their style. Call it stiff-upper-lipped British gent.

“They’re almost interchangeable — apart from their ties,” said Eric Musgrave, the author of “Sharp Suits” and director general designate of the U.K. Fashion and Textile Association. “I get the feeling that none of them dresses as he would naturally like to — but rather how he’s told to.”

Here is a snapshot of three men dressing not for comfort or style — or even to please their wives — but for victory.

Typical look: Scotland-born Brown is hardly known for his sartorial flair. In his 10 years as Britain’s Chancellor of the Exchequer, Brown’s look was characterized chiefly by his boxy, ill-fitting suits, unruly hair and dour expression. The rumpled look presumably suggested his attention was focused on tightening Britain’s purse strings rather than the frivolity of fashion. However, when he took over from the slick-and-stylish Tony Blair as prime minister in 2007, he was subjected to something of a makeover, spearheaded by his wife, Sarah Brown, a former public relations executive. In came bespoke suits and silk ties, and his previously mottled teeth (this is Britain, after all, where dentistry is a challenge) got a spruce up, too — although he now seems obliged to flash his pearly whites every chance he gets. The result is a series of awkward, stage-managed smiles.

Shirt style: Brown typically opts for a classic, bright white shirt. While he’s not one for off-duty dressing, he gave a tentative nod to his casual side on summer vacation in Suffolk two years ago, wearing a gray jacket and an open-necked lilac shirt. He’s also tried the look during the current election campaign, wearing blue chinos, an open-necked shirt and a blue windbreaker for a stroll in St. James’s Park with his wife. It didn’t work: The British press merely chastised him for aping David Cameron’s more effortless smart-casual look.

Where he shops: Savile Row tailors Timothy Everest and Gieves & Hawkes have both made suits for Brown. “Mr. Brown has acquired both personally tailored and ready-to-wear garments [from Gieves & Hawkes],” according to the company.

Musgrave’s verdict: “He’s built like a rugby player and has a bearlike demeanor, which means that, in minutes, anything you put on him looks untidy. He’d probably be much happier dressing like a geography professor in cords and a tweed jacket.”

Typical look: Cameron’s work uniform consists of a white shirt, a blue tie and a smart made-to-measure suit, often from Savile Row tailor Richard James — although he also wears off-the-peg suits. Dressed down, or in a suit, Cameron is arguably more stylish than his counterparts thanks to his arty wife, Samantha, the creative director of luxury leather goods firm Smythson, whom he claims chooses his clothes. “She just sort of locks me in the dressing room and feeds bits of clothing under the door. I’ve never actually seen the inside of a shop,” he said in an interview on the British radio station Absolute Radio. Whether this is true — or the dark forces of a spin doctor at work — Cameron’s “I’m one of the lads” rhetoric seems to appeal both to male and female voters. He has, in the past, made it to British GQ’s best-dressed list. Cameron is keen to distance himself from his privileged upbringing and education at Eton and Oxford. At his sister’s wedding last weekend, he shunned a morning suit for fear, commentators said, of looking too posh, and is loathe to don black tie for formal parties and events for the same reason.

Shirt style: Unlike the other party leaders, he’s often pictured in the British press tieless, with his top shirt button undone and sleeves rolled back to the elbow.

Musgrave’s verdict: “I think of all the candidates, he’s the one who’s most repressing an interest in fashion. He does, however, look comfortable in a suit, although he might be happier without a tie.”

Typical look: Given his affluent, privileged and multicultural background — Clegg is the son of a Dutch mother and half-Russian father, and the husband of a smart Spanish beauty — one would think he’d have embraced some sort of fashion savvy. But it was not to be. The candidate, whose party is perpetually associated with the granola-crunching, beard-wearing and Birkenstock-loving crowd, instead favors a decidedly anonymous, neutral palette. By day, his uniform consists of dark two-button, single-breasted suits and, on the weekends, he relies on utterly forgettable shades of brown, stone and denim. Overall, his attire does little for his wishy-washy complexion and his mousy brown hair with its unfortunate middle parting, circa 1985. It’s clear that his wife, Miriam Gonzalez Durantez, with her ready smile, film-star jaw line, and dark, glossy hair has all the looks and style in the family.

Favorite tie color: Yellow, preferably from Marks & Spencer. It matches his party’s official stripe, but does nothing for this Englishman’s pale skin.

Shirt style: White or blue, often with a narrow-spread collar.

Where he shops: For a candidate who bills himself as an environmentally aware man of the people, he’s chosen a solid and respectable high street brand. Jaeger confirmed Clegg buys his jackets and trousers off-the-peg from its Regent Street flagship. Jackets cost about 250 pounds, or $380 at current exchange, while the price tag on the trousers is roughly 125 pounds, or $190.

Musgrave’s verdict: “I am sure Clegg’s trousers are too long. There’s a pooling effect at the ankles, which I suspect means they haven’t been altered correctly.”