The 20 year-old holds her own with Michael Douglas in the film "Solitary Man."

By Vanessa Lawrence on May 17, 2010
View Slideshow 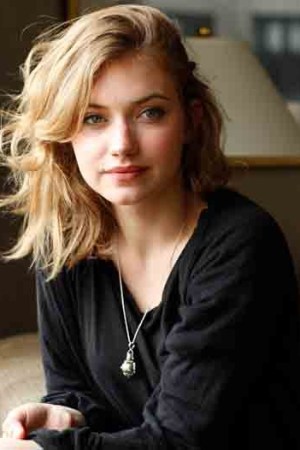 The notion of playing it safe has apparently never occurred to Imogen Poots. The 20-year-old actress’ angelic looks — peaches-and-cream complexion, blue pools for eyes — belie her taste for an offbeat part. Her breakout was the sci-fi dystopian gore-fest “28 Weeks Later,” hardly your average pretty-girl choice. And this Friday Poots goes mano a mano with Michael Douglas as a short-lived May to his December in “Solitary Man,” the dramedy from directors David Levien and Brian Koppelman, who also penned the screenplay.

“It’s few and far between to find a role for a girl that actually is multifaceted and isn’t just one dimensional,” explains Poots, curled up on a sofa at the Regency hotel in head-to-toe black.

In “Solitary Man,” Douglas is Ben Kalmen, a once-legendary car salesman who has hit rock bottom financially and personally. He hopes to restart his career thanks to his Upper East Side girlfriend Jordan’s (Mary-Louise Parker) well-connected father, but his ceaselessly wandering eye threatens to ruin his chances. Especially when it settles on Jordan’s 18-year-old daughter Allyson (Poots), whom he escorts around his alma mater as a favor to mom. Combine Allyson’s resentment toward her mother with Ben’s well-honed seductive moves and a few glasses of wine, and you can guess how things go down.

Though you probably won’t guess their aftermath — for Allyson proves a formidable match for Ben’s vulnerable ego, a quality the directors found in Poots’ audition tape.

“It was important to us that the character [had] that strength so that it seemed like she wasn’t a victim or got manipulated, that she was every bit the guy’s equal. And that’s what Imogen brought,” says Levien.

In many ways, Poots, who grew up in London, wasn’t a natural choice to inhabit Allyson’s jaded Upper East Side demeanor — for one, she had never worked with a dialect coach.

“To play a girl with that level of self-possession is very challenging. Most of the actresses that came in, they had craft but they didn’t have that level of self-assurance, self-regard and certainty of their station,” says Koppelman. “Although Imogen grew up as far away as she could from it, she’s so smart an actress that she got from the page that that’s what was required.”

For her part, Poots found her way into Allyson without much difficulty.

“I think she’s pretty normal in that sense of a teenager in terms of mundane struggles of who she wants to be, and she explores that in a really controversial way with Ben,” explains the actress.

Poots’ own adolescence was much less fraught. The daughter of journalists, she studied at the posh Latymer Upper School (Hugh Grant is an alumnus). When she was 15, she joined a community improvisational theater group on a whim and was immediately hooked.

“I found it really invigorating and amazing, and I think you see the world so differently when you know what you want to do and how you want to do it,” she recalls.

The group’s agency helped her land “28 Weeks Later,” which she shot while studying for her A-Levels (she got A marks in art history, English and visual arts). This year she’ll appear in the period film “Centurion,” the Internet thriller “Chatroom” (it premiered at Cannes Friday) and the TV movie “Bouquet of Barbed Wire,” a remake of the Seventies incest-themed drama.

“[My character] becomes impregnated by her boyfriend, and then her boyfriend sleeps with her mother and it’s all crazy,” says Poots with a grin. “But again, exciting and what a great journey to go on.”

It’s a busy career that has kept her from continuing her studies at the Courtauld Institute of Art, whose acceptance she has deferred for the past two years.

“When I was 18, I thought, I have to go to university, otherwise I’m going to be really ignorant,” says Poots. “But then you realize you’re learning all the time, and as long as you’re reading and kind of tuned in to what’s going on, then it’s not hard to form your own opinions.”