After the protocol and pageantry of Monday’s meetings with the royals, President Trump is facing protests in London and around the country.

LONDON — Britain’s royal family may have given a warm and lavish welcome to U.S. President Trump and his family on Monday, with banquets and tours of Buckingham Palace and Westminster Abbey, but the same can’t be said of other Britons who are taking to streets and squares to protest the leader’s state visit.

The Trump baby blimp, with its quiff and sneering mouth, is flying once again over Parliament Square, having made its debut last July when Trump was here for a short visit. Some protesters are selling toilet paper rolls printed with his face, while others are carrying anti-Trump posters.

A model of Trump sitting on a gold toilet has been set up in Trafalgar Square ahead of a demonstration set to take place on Tuesday morning, with opposition Labour leader Jeremy Corbyn ready to address protesters. Other demos are planned for big university towns such as Oxford and Exeter, and for Glasgow and Edinburgh in Scotland. 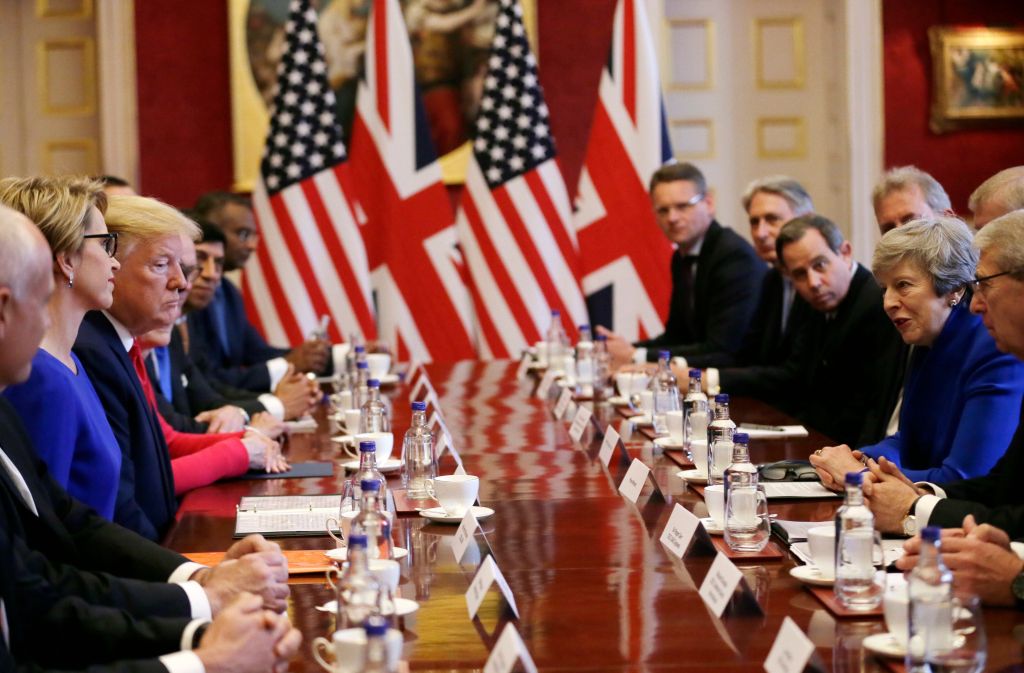 On Tuesday morning, the president was locked in breakfast meetings at St. James’s Palace with outgoing British Prime Minister Theresa May and U.S. and U.K. business leaders, talking about future trade deals. Trump urged the U.K. to slip free of its European “shackles” and promised a “very, very substantial trade deal” with America once it has quit the European Union.

The meetings follow the Trump family’s day with the royal family, capped by a white tie dinner during which Trump hailed the historic ties between Britain and the U.S., and in particular the countries’ alliance during World War II.

This three-day visit, which had been in the works for months, was supposed to be taking place after Britain cut ties with the European Union on March 29. During this trip, deals were meant to be forged with a post-EU Britain, and May was supposed to have been the one doing them. 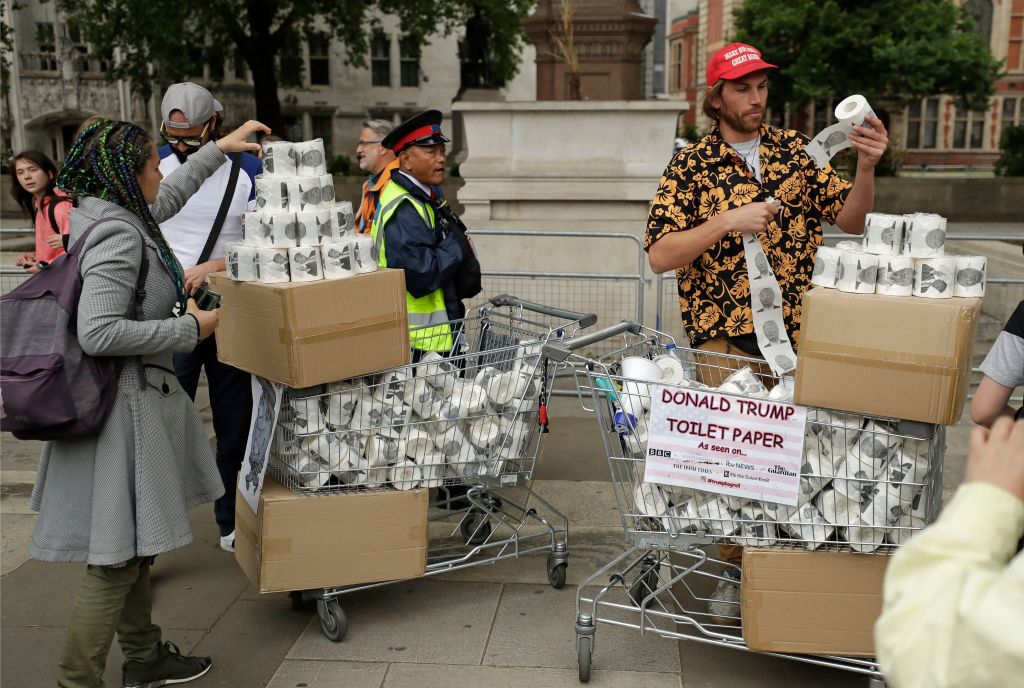 Donald Trump toilet paper for sale in central London as people gather to demonstrate against the state visit of President Trump.  Matt Dunham/AP/REX/Shutterstock

With Britain’s future in the EU still up in the air, and May on her way out of office on June 7, those plans have been put on ice, although May said on Tuesday there were ample opportunities for the two countries to work together, and that a “good bilateral trade deal” was possible.

Later on Tuesday, Trump was due to meet the prime minister at 10 Downing Street, where the two are set to talk about climate change and the controversial Chinese tech giant Huawei.

First Lady Melania Trump will attend a garden party on Tuesday afternoon at Downing Street, while this evening the Trumps will host a dinner at Winfield House in Regent’s Park, the official residence of the U.S. ambassador to Britain. Guests are set to include Prince Charles and the Duchess of Cornwall.