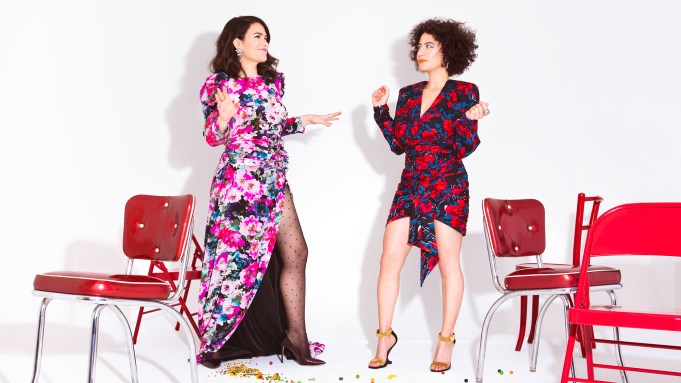 Ilana Glazer wants to know the name of every person in the room. She’ll come in, ask each name, and recite it to herself, committing it to memory. She does this throughout the day; each person she meets, she wants to know who they are, beginning as simply as with a name.

Abbi Jacobson, of course, is right beside her. Glazer is immediate with her openness, giving space for Jacobson to warm up and settle into the room. Once they get going, though, they are as charming a pair as the loyal devotees of their Comedy Central hit “Broad City” would hope.

The duo have a friendship, which was the basis for their web series and then the show, that countless Millennial women both envy and see themselves in. As the success has grown, the two remain loyal to their fictional Abbi and Ilana’s story lines, but have decided to make the upcoming fifth season, premiering Jan. 24, the last.

“One thing I’ve been noting lately is the gap between Ilana Wexler, my character, and Ilana Glazer, my real self,” Glazer, 31, says. “And how I’m so grateful to have had the opportunity to develop Ilana Glazer through Ilana Wexler, but now that it is over, I’m also noticing there’s a lapse there, too, and I’m excited to push myself to grow in new ways. To not fall into the same rhythm that we’ve been doing for, on TV, six years, and since the web series, 10 years.”

“We’ve been tied to these other versions of ourselves,” Jacobson, 34, adds. “And I’m excited to challenge myself in other creative ways.”

“It’s almost an abyss that we’re jumping off a cliff into,” Glazer continues. “I don’t know what that’s really going to feel like when it really is over, but I’m excited for that space.”

Together they are as you’d expect them: hilarious, in sync and sharp, but also delightfully low-key.

“People note how serious I am, but I’m not serious, I’m just being normal,” Glazer says. “They don’t realize that this is a highly curated, edited version of ourselves. Also, people ask us ‘is it really improvised?’ It’s annoying because it feels like the show is so good and so well-written and acted that it feels improvised, which is good. That feels like an achievement. But we take our work so seriously and we spend 11 months of the year making this show so good. I think they’re surprised at how serious we are about our work and how business-oriented we are.”

The fifth and final season, naturally, deserved a different approach than its predecessors.

“We usually approach the show and writing in ways of what concepts and things people go through in life, things we’ve been going through in life that we want to cover,” Glazer says. “But this season, it was like, ‘How do we want to wrap up the characters, but also usher them off into this nether space?’ The way that we wrote it, it really feels like, ‘Oh my gosh, these are real people who are going to go off into the world and I can see what their next steps are.’ That’s the thing about ‘Broad City,’ too, is that it feels so alive.”

“The best thing in the world is to be walking down the street and someone walks by and says something kind about the show,” Jacobson says. “To come up in comedy in New York and try to be seen and for us to have been making this show for the past 10 years, it’s just sort of like, whoa. I can’t believe that Ilana and I did this — exactly what we set out to do.”

Their seriousness comes through when asked why they think the show resonates with people so intensely, aside from its hilarity.

“I think it’s partially because the show’s very sincere, which is not like a lot of comedies,” Jacobson says. “We’re not snarky. And I think the biggest thing is Ilana and I started doing this show because we couldn’t get any other parts, and we also just completely based it on the fact that we cracked each other up and we felt like our friendship had this different feeling and dynamic than what we’d experienced before. I think it’s a thing that you kind of can’t just write two actors to have that, I don’t think. I just think it feels different and I think people feel like they’re part of that friendship and that’s kind of what you look for in [television].

“I guess, for me, I feel so validated that people can sense that and know what’s going on from our brains to the screen,” Glazer adds. “It feels good to me. Obviously it’s like, ‘Yeah, no s–t it’s validating because your show is on TV,’ but I mean more the fact that people are receiving our art the way that we send it out, the way we intend to send it out, makes me feel hopeful.”

“Broad City” began as a web series in 2009 and premiered as a TV show on Comedy Central five years later. The show will close in 2019, with Donald Trump in the Oval Office and a new focus on sexual harassment and female empowerment in Hollywood and the comedy world. Along the way, Glazer and Jacobson have found themselves a voice for many women, as the show has gained relevance over the years.

“When we started the show, we were told how feminist we were or whatever,” Glazer says. “It was just funny because we hadn’t labeled it, but I think the longer our platform has been on the air and the longer our show’s been on the air, the longer our platform’s had time to reach more people. I think we’ve become more reflective and more conscious of this vehicle, reaching people and what it means. I think we’ve only harnessed those powers more pointedly. It’s not like it’s changed our core makeup, it’s just raised our consciousness about this amazing opportunity we’ve gotten.”

“I think also we were always writing from our gut, writing what we felt about the world and our experience,” Jacobson says. “The more we did it, the more we harnessed the things that were most frustrating or exciting.”

The two have a continued relationship with Comedy Central, including a live-action comedy they are executive-producing and an animated series they’ve created. They don’t plan to star in any of the projects they’re developing with the network.

“What we’re trying to do is expand into new spaces — it’s a new space to not star in a show on Comedy Central,” Glazer says. “It’s a new process and feeling and you learn new things from adding some roles and eliminating some roles. I think we are just looking to grow, so this is part of that.”

Jacobson, who published a book, “I Might Regret This: Essays, Drawings, Vulnerabilities and Other Stuff” in the fall, unsurprisingly feels similarly about the future.

“I have all these things in the works but my whole year is not planned the way that it usually is, which is very…it’s scary but it’s also so rad,” she says. “It’s just like, who knows? Which is not a thing that’s usually happening with us at this point.”

The post Broad City years, then, will be an ongoing creative partnership for the duo, with some moments of individual professional growth for good measure.

“We’ve been talking about the difference in our [years],” Jacobson says. “It’s fun. I’m upping my nagging skills right now with a couple of projects to make them land when I want them to land. It’s fun to see, to push it along and nag people and bully projects into happening on my timeline. I’m kind of enjoying that.”