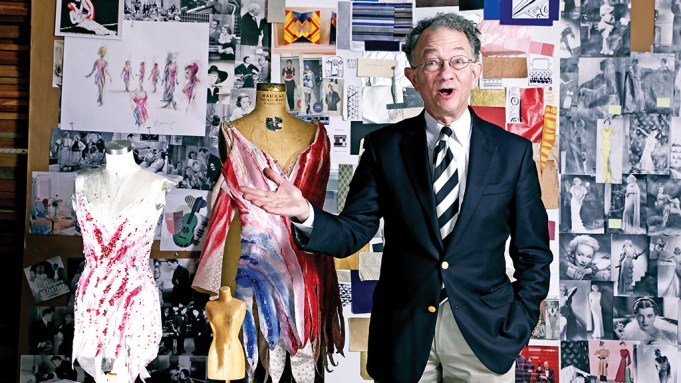 William Ivey Long has been Broadway’s go-to costume designer since 1978, the man behind the memorable looks in “Guys and Dolls” (the 1992 revival with Nathan Lane as Nathan Detroit), “Cabaret” (both the 1998 revival with Natasha Richardson and the most recent one with Michelle Williams) and the original productions of “The Producers” and “Hairspray.” After six Tony Awards, this all-around Broadway Baby is hardly slowing down. In fact, the new hit show he’s now involved with, “On the Twentieth Century,” was nominated for five Tonys, including one for him for Best Costume Design of a Musical. Ivey Long’s costumes will be up against Catherine Zuber’s for “The King and I,” Bob Crowley’s “An American in Paris” and Gregg Barnes’ “Something Rotten!” on June 7. Here, he talks about those designs, NeNe Leakes and his toughest assignment yet — improving the red carpet at the Tonys.

What’s your design philosophy?
It’s always [about] the book and music. We are just the caretakers and the supporters. Remember, there is an intimacy in the process of the fitting room. Because it’s me, the performer in their underwear and a mirror. So that process is very sacred and I never talk about it. I have to deal with people’s self-image for a living. If someone says, “Oh my hips,” if they’re worried about it, my job is to be worried about it. I sometimes think psychology is 50 percent of what I do. Because the definition of a costume designer is helping someone become something else.

Who’s been the most surprising person you’ve ever outfitted for a show?
NeNe Leakes! I had so much fun with her. She’s a doll. She’s on the “Real Housewives” of something, and she played the wicked stepmother for the last two-and-a-half months [in “Cinderella”]. Oh, I adored her. Fran Drescher also played the wicked stepmother. Not that these people are typecast or anything, but I never would have thought I’d be making Cinderella’s stepmother costumes for NeNe Leakes and Fran Drescher. But it’s great, they add so much to the story because they bring their own personality as well as their perceived personality from their television persona. And sometimes it’s just magic.

How do you approach period costumes, for example in “On the Twentieth Century”?
I started the costumes in March, so literally a year ago. It’s a smaller show, 200 costumes, so that’s more manageable. Big shows like “Hairspray” or “The Producers” have 350 costumes. To start, I fill the room with reference pictures, in this case, a lot of Jean Harlow. And then the director comes with Post-it notes, and we tag ones that are meaningful. I’m also thinking about the set. I make a wall [collage] — I call it the colors of the kingdom — and it all starts from what the set designer has done, what they’ve created. I take design elements from it, so in this case, a train and Art Deco, and then I start collecting the colors and fabrics. This world is crucial for me. And then I’ll pull inspiration images from today, for example [points to Paco Rabanne and Mugler runway images]. I wanted it to feel like today, because we’re watching it today. When you do a period production, unless you’re doing a BBC drama, you want to incorporate today’s eye. It’s really the way things fit. For example in “Cabaret,” if I was doing real late Twenties underwear, they’d be baggy and full, so I started with vintage and adapted it for today’s world.”

Where do you source your fabrics?
I always say we’re at the mercy of whatever Donna Karan ordered for her clothes three years ago because except for black-and-white and nude, most fabrics that you’re able to buy at the stores have been created for someone’s specific collection, or for some fantasy project or upholstery or curtains. They don’t just invent fabrics. Maybe someone in Italy showed designs — you know, mock-ups, one-offs — and then people ordered it and they manufactured it and they sell it to New York. Then when the run is done, they ship it to the shops.

How else does fashion inform the way you design?
It informs it so much I don’t know how to answer that question. Because, you know, I worked for Charles James. I moved right from the Yale Drama School to the Chelsea Hotel because of Women’s Wear Daily. That’s where I first read about Charles James. I first studied history at the College of William and Mary. And then I went to Chapel Hill to study renaissance and Baroque architecture. Then, through various stories and turns on the way, I went to the Yale School of Drama because I realized, through my history of architecture, that I wanted to be a set designer, and so I went to study with Ming Cho Lee, the great set designer and teacher. And while there, I discovered costume design and Mr. James. But actually all of this influences everything, doesn’t it? Training your eye is everywhere.

The Tony Awards nominations were revealed last week. Let’s talk about the state of the red carpet.
I’m chairman of the American Theatre Wing, finishing my third year out of four. So I have a mission to really rev up our red carpet. We did a first stab at it last year, and we’re doing a much bigger stab this year. We’ve printed out [pictures of] red carpets around the world and studied them — from the Oscars, Cannes, Metropolitan Museum. I’ve been canvassing all my friends, all my colleagues for advice, for thoughts. Because you know it takes a village. And I read everything, I’ve been saving critiques. Joan Rivers was very helpful — you know I made all of Joan’s performing clothes for the last 10 years. I seriously benefited from many talks over several years with her. She’s one of the smartest people on the planet, and she was going to advise us more. She was going to be our fairy godmother.

Speaking of fairy godmothers, Anna Wintour has called the Tonys’ red carpet a “disaster.”
Well, that’s a challenge. The gauntlet is down! But you need gauntlets, especially from smart people. And we’re not just reading previous critiques, we’re asking for advice. We’re not the Oscars. We don’t want to be the Oscars. It’s a different type of celebrating. They have Hollywood glamour — we have Broadway glamour. We don’t want people looking at your fingers and asking where did you get this and this — that doesn’t have anything to do with real glamour and real respect for the artist. [The red carpet] matters as a first step — literally first step, pun intended — for the evening, celebrating excellence in the theater.”