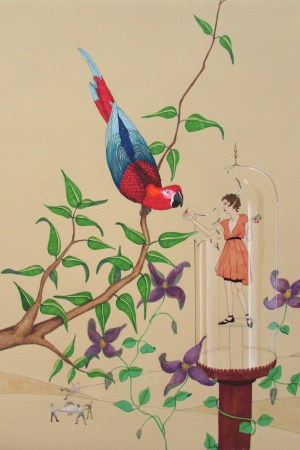 Brooke Shields has been nurturing her artistic side. For the fifth installment of the Art Southampton contemporary and modern art fair, the actress curated an exhibition along with New York Academy of Art president David Kratz. “Call of the Wild,” opening Thursday in Bridgehampton, N.Y., features artwork by the academy’s various alumni.

Shields has sat on the academy’s board for several years and was nudged into curating a show with Kratz, whom she originally met while attending the organization’s annual “Take Home a Nude” fund-raiser. “It was like I had known him my whole life,” Shields recalls of their introduction. “I feel like we’re brother and sister. And he just opened up a whole new world and kept asking me to be a part of it.”

Without studying fine arts officially, Shields was initially hesitant about taking on curatorial duties. “I don’t have any degree or art history background, so I was very hesitant to be anything other than a spectator,” she admitted. “And David was just like, ‘don’t underestimate yourself,'” she continued. “He gave me the confidence to make art less prohibited. When he said, ‘Do you want to curate a show?’ I was like, ‘I can’t, I don’t know anything.’ And he said ‘You have an opinion; you have an aesthetic.'”

For the theme of this year’s show, Shields and Kratz looked for artwork that offered an interpretation of the natural world or animal kingdom. “It was a very broad topic but almost every artist had some identification with it,” Shields noted.

They pared the submission pool while working long distance — Kratz in New York, Shields in Savannah, Ga. “We didn’t get to have that time where you’re just in the room together going over all of the art in person,” Shields explained. “So we had to do it electronically for a while, and then we finally came together and we were surprised at how many of the same selects [we had] and how we did not disagree. And how if one of us was on the fence about something, the other one made a case for it — for or against — and then the select process just kept getting pruned,” she continued. “It’s a lengthy process to go through the submissions and realize what your first selects are and what you go back to and vacillate on. What was shocking to me is I thought: ‘Oh my god, I’m not going to like something and that’s going to somehow discredit it because of my style.’ And over the course of this process, I realized it has nothing to do with that. Because I was able to truly appreciate something that I would never hang on my wall.”

With her inaugural show ready to be unveiled, Shields is excited about future opportunities to contribute to the curatorial process and further her involvement with the New York Academy of Art. “I want to up my game this summer — I want to learn more,” she said. “My taste has never been what is the most valuable. You know, I love some things that are very valuable and there are artists who do whatever and it’s expensive, and then there’s this whole other contingency of art that I just love — I love seeing it and I love watching it mature,” she continued. “My industry is all about comparing yourself to someone else, and I’m sure that if you’re an artist in the art world that is the case. But what’s lovely to see is this environment at the academy is truly a community where they support each other and thrive on their differences.”

The show runs through July 11 at Nova’s Ark Project in Bridgehampton.