Brooklyn Decker Just Goes With It 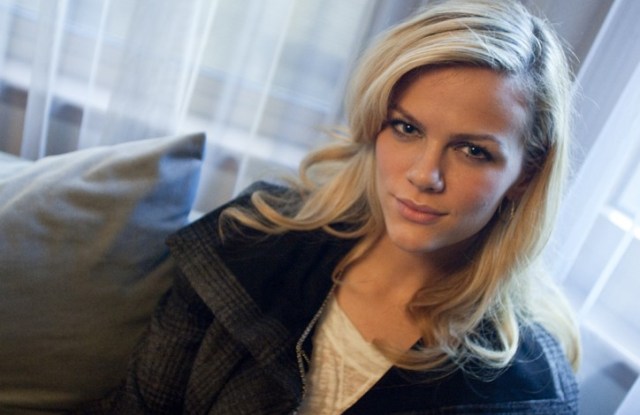 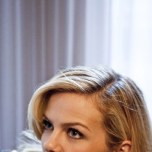 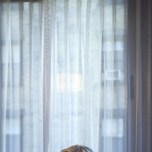 In a low-lit room on the ninth floor of the London NYC Hotel, Brooklyn Decker sails over to the blue taffeta window banquette, the ease of her sizable stride unimpeded by the 4-inch heels of her slate gray suede Isabel Marant booties. In a low husky voice — the effect of a sore throat rather than a low-pitched larynx — she apologizes for her late arrival from her Dumbo apartment.

Apology accepted; the Sports Illustrated Swimsuit cover model-cum-romantic comedy heroine has had a busy few days. Decker and her husband, tennis heartthrob Andy Roddick, arrived in New York from Dallas at 2:30 a.m. the day before. The pair had attended the Super Bowl with the cast of her debut film, “Just Go With It,” an Adam Sandler-Jennifer Aniston romp, (which, by the way, ruled the box office in its debut over the weekend), in which Decker plays the bombshell straight woman to the comic leads.

It’s no wonder she has lost her voice. The 23-year-old North Carolina native has been bantering for several weeks straight doing press for the film as far away as Australia. It’s a Tuesday morning and the bodacious blond is thoughtful and voluble as she sips her cup of tea. She wears a fitted A.L.C. motorcycle jacket with over-sized lapels, more Cameron Diaz than The Fonz, in gray and black plaid wool.

The jacket, opened to reveal a white T-shirt, doesn’t seem warm enough for what promises to be a 19-degree day, but she shows her stylist that she did, in fact, plan for the occasion, pointing to the ankles of her stretch black leather Current Elliot leggings: “Look, I have pantyhose under these so I’m ready to go!”

Ready to go means prepared to try on the rainbow of outfits displayed on a tall hotel clothes rack. Decker’s first movie will have its première later that night, so she must choose wisely. She usually doesn’t work with a stylist but time constraints led her to call on Annie Ladino, a friend in the biz, to pull some options for the event.

The professional is encouraging a MaxMara jumpsuit in a fierce shade of eggplant, but Decker has her hesitations.

“It’s beautiful but it’s kind of weird,” she says. “Like, do I wear it and just go for it? While at the same time it’s my first premiere, so I don’t want to be completely slaughtered.”

(She ended up picking a sultry body-hugging Dolce & Gabbana leopard print sheath and soaring Brian Atwood pumps. No risk of being slaughtered when you look that hot.)

It’s been an eventful month for Decker. In addition to her “Just Go With It” duties, she’s , in the running for the Sports Illustrated Swimsuit Issue cover, which will be revealed tonight on “The Late Show With David Letterman.” As last year’s cover model — as well as Esquire’s Sexiest Woman Alive — the chance of an encore appearance seems unlikely. Though if anyone could repeat, it might be her.

The sore throat-inducing schedule is not atypical. The model says that most months she spends more time in the air than on land in either of her home bases: New York City and Austin, Tex., which is Roddick’s hometown and the couple’s primary residence. Decker’s beloved Billie Jean, a wise-faced English bulldog, resides there full time.

“She’s two and a half,” Decker beams maternally of Billie Jean before realizing with excitement that her bulldog’s birthday is approaching in April. As a child, Decker dreamed of being a veterinarian.

“I grew up with five rescue dogs in the house,” she says. “People would just drop animals off on our front porch. We were that house. It was like Dr. Doolittle–Decker style.”

Her sophomore film effort is the recently wrapped “Battleship” with Liam Neeson and Alexander Skarsgaard. Asked which leading man she prefers, Decker leans back on the Carolina blue velvet throw pillow.

“That’s hard; they’re both such sweethearts,” Decker says. “I spent more time with Alex, so I would say I know him better, but Liam played my dad, so I mean you always have an attachment to your father. I guess I have that whole Daddy thing with Liam — that’s gonna sound horrible! –but you know what I mean, he’s the guy who protects you, right?”

She insists that a starring role is not her goal. She just wants a small-but-rich part in a smart, fast-paced comedy à la Aaron Sorkin. She’s obsessed with “The West Wing” and lists all of the writer’s films like a devout Catholic counting rosary beads. Though it was a name from another departed NBC program that gave her fits in filming “Just Go With It.”

“It’s such a bizarre experience because she was in all of our houses growing up, so I was really nervous to meet her,” she says of working with Aniston. “And this one day on set I got all teary-eyed because I was standing across from her and I’m thinking, ‘Oh my Gosh you’re Jennifer Aniston.’ The whole weight of the situation fell on me.”