When writer Marie Brenner takes on a big assignment, she becomes a woman utterly obsessed. "It's all I can think or talk about, which drives everyone around me crazy," says the Vanity Fair editor at large, best known for her 1996 exposé of the... 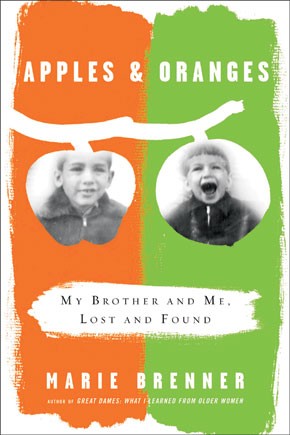 When writer Marie Brenner takes on a big assignment, she becomes a woman utterly obsessed. “It’s all I can think or talk about, which drives everyone around me crazy,” says the Vanity Fair editor at large, best known for her 1996 exposé of the tobacco industry that inspired the film “The Insider.” “But when I get really outraged, there’s no going into it halfway.”

Aside from investigating Big Tobacco, Brenner, 58, has unveiled the inner workings of Enron, the rise of anti-Semitism in France and the legal gamesmanship surrounding prisoners’ rights in Guantánamo, Cuba. But her most difficult topic, she says, was much closer to home. “Apples & Oranges: My Brother and Me, Lost and Found,” out now from Sarah Crichton Books/FSG, is Brenner’s tale of her combative relationship with her older brother, Carl, a lawyer-turned-apple-farmer, who was diagnosed with cancer in 1999. In telling the story of the four-year journey she undertook to help Carl find treatment, Brenner also manages to uncover the surprisingly fascinating history of the apple in America, current research on sibling conflict and the story of her fractious, larger-than-life Jewish Texan family, which included an aunt who befriended Frida Kahlo and posed for Edward Weston.

Upon meeting Brenner, a tall San Antonio native with a passing resemblance to Ellen Barkin, it’s immediately clear why she’s so successful in getting sources to talk to her: She’s curious about everything and listens with intense focus and sensitivity. “I’m very people-oriented,” Brenner says, pouring tea and proffering a plate of cherries in the breakfast nook of her Upper East Side town house. “I think that if you understand the person, you understand the event.”

Brenner describes herself in “Apples and Oranges” as a quintessential Manhattanite: a stressed-out, black cashmere-wearing BlackBerry addict who can’t stomach George W. Bush. (Her brother, on the other hand, she describes as a hot-headed, gun-owning right-winger with an inexplicable mania for cultivating fruit.) She describes her high-powered pals, Peggy Noonan, Deeda Blair and real estate mogul Leonard Stern. Lesley Stahl and Tina Brown are among her closest friends, and the book party Brown threw Brenner last week, drew Kurt Andersen, David Remnick, Mike Nichols, Diane Sawyer and Lesley Stahl — the very crowd Carl would have scornfully called “her ACLU friends in New York.”

This story first appeared in the May 29, 2008 issue of WWD. Subscribe Today.

“Marie is a full-service friend. If you’re under her wing, she’s the first to call, the first to take care of you,” says Stahl. “She’s become a friend of my mother’s and of my daughter’s.”

As Brenner explains it, Carl Jung believed the bond between brothers and sisters is much more powerful than anyone ever thought. The years she spent reconnecting with her brother before his death in 2003, she says, fundamentally changed her life. And not just because, between deadlines, this quintessential New York media insider is now helping run her late brother’s beloved apple orchards in Washington state. “Just think how much richer our lives would be,” says the writer, “if we were somehow able to forge a stronger relationship with our siblings.”