Metaverse Could Disrupt Fashion as Much as Streetwear, Say Speakers at Paris Conference

It was the upset of the night. When Brothers Osborne were announced as the winners of the Vocal Duo of the Year at last week’s Country Music Association Awards, unseating three-time winner Florida Georgia Line, no one was more surprised than the siblings from Maryland. Their heartfelt acceptance speech expressing their shock and gratitude gained them more fans immediately. WWD caught up with lead singer T.J. Osborne and his guitar-playing brother, John, before their first headlining show after the win to talk about the award and their other love: fashion.

WWD: Congratulations on your win the other night. Were you really as surprised as you seemed?

T.J. Osborne: It was one of those things where for a minute, I totally forgot that we were on national television.

John Osborne: If we ever get nervous in any capacity whatsoever, we just constantly say the f-word. We won Song of the Year at the ASCAPs two days before that [for Stay a Little Longer] and it was a very emotional experience because we’d seen so many other people win that over the years. And we got up there, and as soon as the first f-bomb came out, the floodgates were opened.

WWD: You’re going to have to prepare speeches now when you attend award shows.

T.J.O.: Honestly, it’s been kind of fun not preparing them. I feel like everyone is waiting on the edge of their seat for what we’re going to say, and we feel the same exact way. ‘What is he going to say?’ We have no idea where this is going.

WWD: You have a distinct sense of style. What did you wear to the CMA Awards since they requested black tie.

J.O.: I wore a hat by Hatwrks — a woman named Gigi [Gaskins] in Nashville makes my hats for me. I had a Manuel jacket and a really great bolo tie made by a Nashville company called Rain + Rust. And Lucchese boots.

T.J.O.: I had on a Hugo Boss tux with a bolo that was also made by Rain + Rust, an independent accessories maker in town, and a white shirt. And Calvin Klein underwear.

J.O.: We love wearing as much stuff that we can that’s made in Nashville and keeping it local.

WWD: What do you like to wear when you’re performing?

T.J.O.: I like wearing local record shop T-shirts so I’ll just put that on if I have one. And I’ll put on some plain black pants — I have some Rag & Bone pants that I usually wear — and some Lucchese boots. So, good T-shirts, jeans and boots.

J.O.: For hats, I’ll always go Hatwrks, but for shirts, 90 percent of the time, I’m wearing a vintage-store find. I love digging through the thrift-store racks and finding something. I feel like I was born in the wrong decade so when I’m going through old clothes, I’m like, ‘This is something I totally would have worn if I was living in the Sixties or the Seventies.’ A lot of times I have to go to a tailor because it’s made differently, but to me there’s nothing better than an old button-up or a pearl snap shirt that’s tailored to you. For jeans, Seven For All Mankind. I put them on and they fit perfectly and I don’t have to get them altered. And Lucchese boots — you can’t go wrong with Lucchese boots, they always work.

WWD: Now that you’ve won these awards and you’re touring the country, what’s next for you?

T.J.O.: Nothing’s really going to change from our end of it. We’re probably going to do the same things. We were in the middle of our first headline tour, the Dirt Rich tour, and we have a bunch of dates left that take us all the way to the end of January. Then we’ll take February off, write some songs and start gearing up for record two. And we’ll be releasing the fourth single off our record at the beginning of the year.

WWD: Can you tell us what it will be?

J.O.: [Looking over at the record company executive in the room] No, I guess we can’t. She knows we’ll just tell you things we’re not supposed to tell you.

T.J.O.: But the biggest thing now that we’ve won the award is that we know people are expecting a lot and we certainly aim to meet expectations. Winning the award allows us to kind of push the envelope like we want to and try to get back to really great songs and let the music surround itself around that. 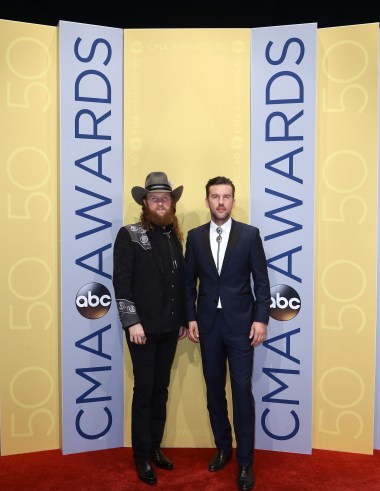