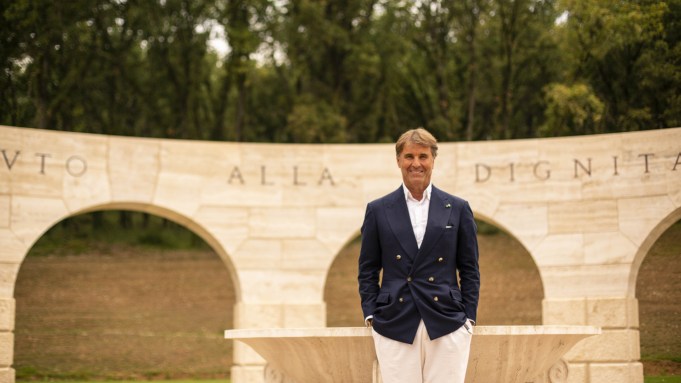 SOLOMEO — Brunello Cucinelli couldn’t have staged it better. With the sun breaking through the clouds after a sudden shower and setting behind the entrepreneur, the 500 international journalists gathered at this medieval hamlet on Tuesday took in row after row of hills and, below them, the conclusion of Cucinelli’s latest restoration project.

“I wanted to give dignity back to the land,” said Cucinelli. “When I was young, I didn’t know what I wanted to do, but I knew that I would work for human dignity.”

Wearing a blue double-breasted jacket over a white shirt and white corduroy pants, Cucinelli was true to form and peppered his speech with quotes from the likes of Confucius, Dante Alighieri, Marcus Aurelius Antoninus, Erasmus, Plato, Saint Benedict and Pythagoras — the latter as he declined to provide a figure about the total amount invested in the restoration of Solomeo, which also houses the namesake brand’s headquarters. “God is in the numbers, let’s see if we can see God in the numbers,” he said, citing Pythagoras.

Cucinelli is no slacker. He has built a business that generated sales of 503.6 million euros in 2017, up 10.4 percent compared with the previous year, and held an initial public offering of his company in 2012 in one of Italy’s most successful stock offerings in recent years. That said, he continues to strive for what he describes as a “graceful and sustainable growth,” while he has recently doubled the size of his production factory that lies at the foot of the hamlet he has been restoring Solomeo, 10 minutes outside of the central town of Perugia, for the past 30 years, setting up a theater, a tailoring school, the Ginnasio garden and the Aurelian Neo-humanistic Academy, among other sites. 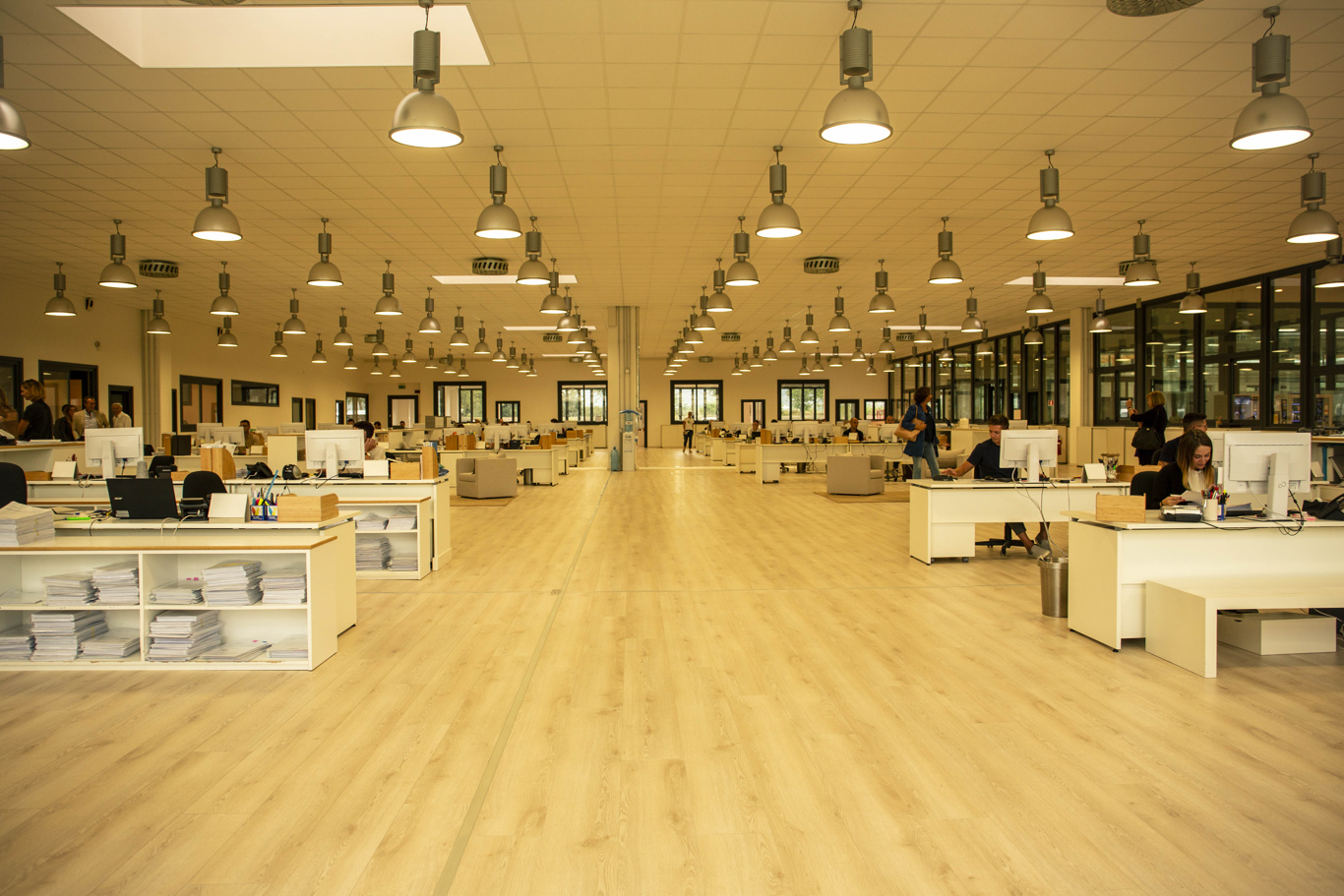 The latest step presented on Tuesday is the conclusion of a project first unveiled in December 2014 and carried through by the Brunello and Federica Cucinelli Foundation, which sees the restoration of the outskirts of Solomeo. Cucinelli, who celebrated his 65th birthday on Sept. 3 and this year marks the 40th anniversary of his company, on Tuesday also presented his first book, “The Dream of Solomeo,” published by Feltrinelli. “I am not a writer, I’ve always taken notes and I’ve put my thoughts into this book, which has taken me almost five years,” said Cucinelli. The volume, dedicated to his daughters Camilla and Carolina, is subtitled “My life and the idea of humanistic capitalism” and will be in stores starting Sept. 6. 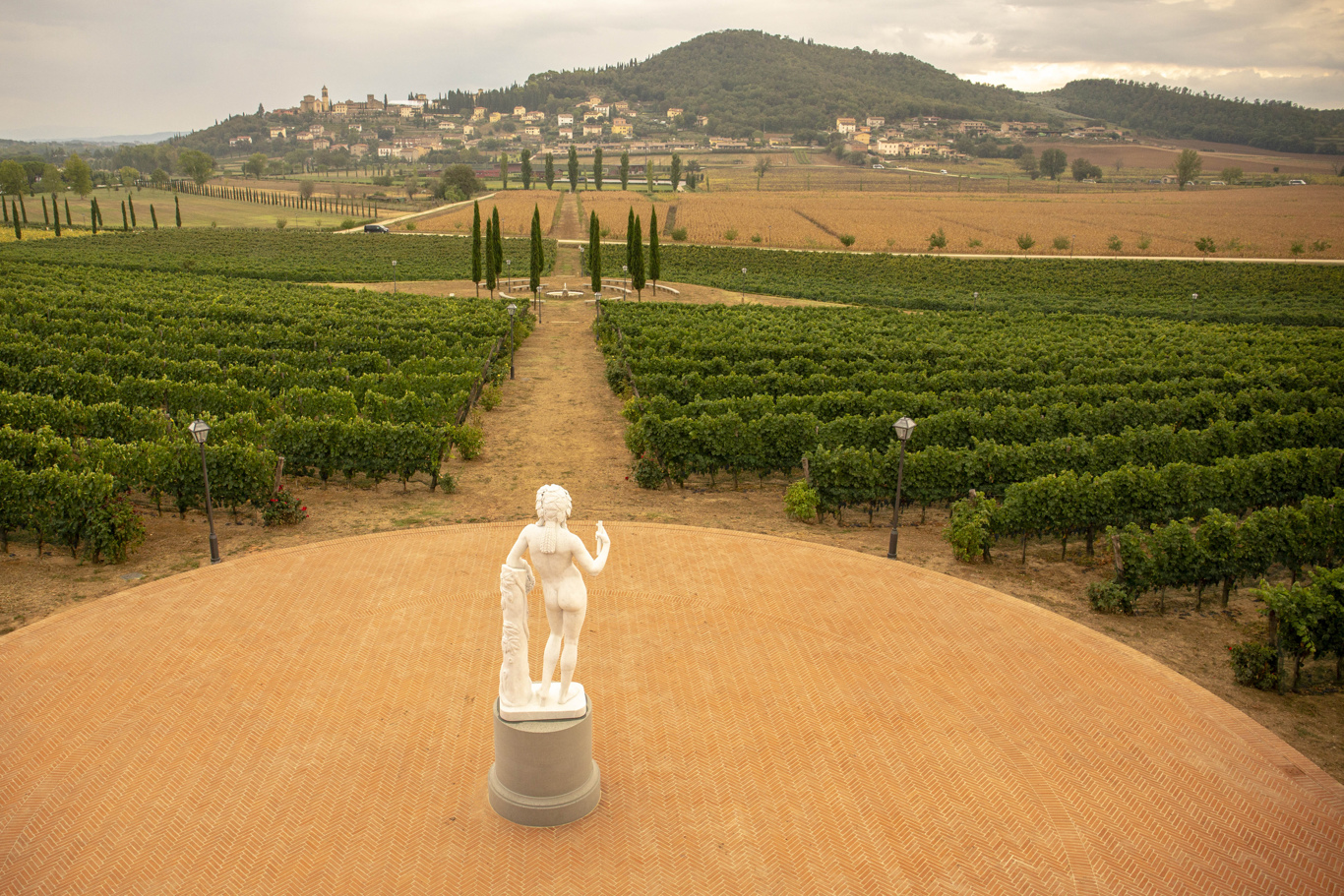 Explaining the restoration of the hamlet’s outskirts, Cucinelli said the fringes of a city “often have a negative connotation. But this doesn’t have to be the case. Outskirts can be beautiful suburbs if their humanity, and the dignity of the people who live there, can be expressed naturally. In Ancient Greece, the word ‘periphery’ indicated the circumference of a circle — the most perfect shape. Couldn’t a periphery be the most perfect form of a city today? We must do something for the land and the outskirts of our cities; we must solve the problem of the outskirts, the peripheries, a problem that often concerns the most beautiful ancient cities.”

To this end, Cucinelli recovered 173 acres of land near his manufacturing plant and tore down six old industrial buildings, planting vineyards, olive trees, sunflowers and wheat, among other things. 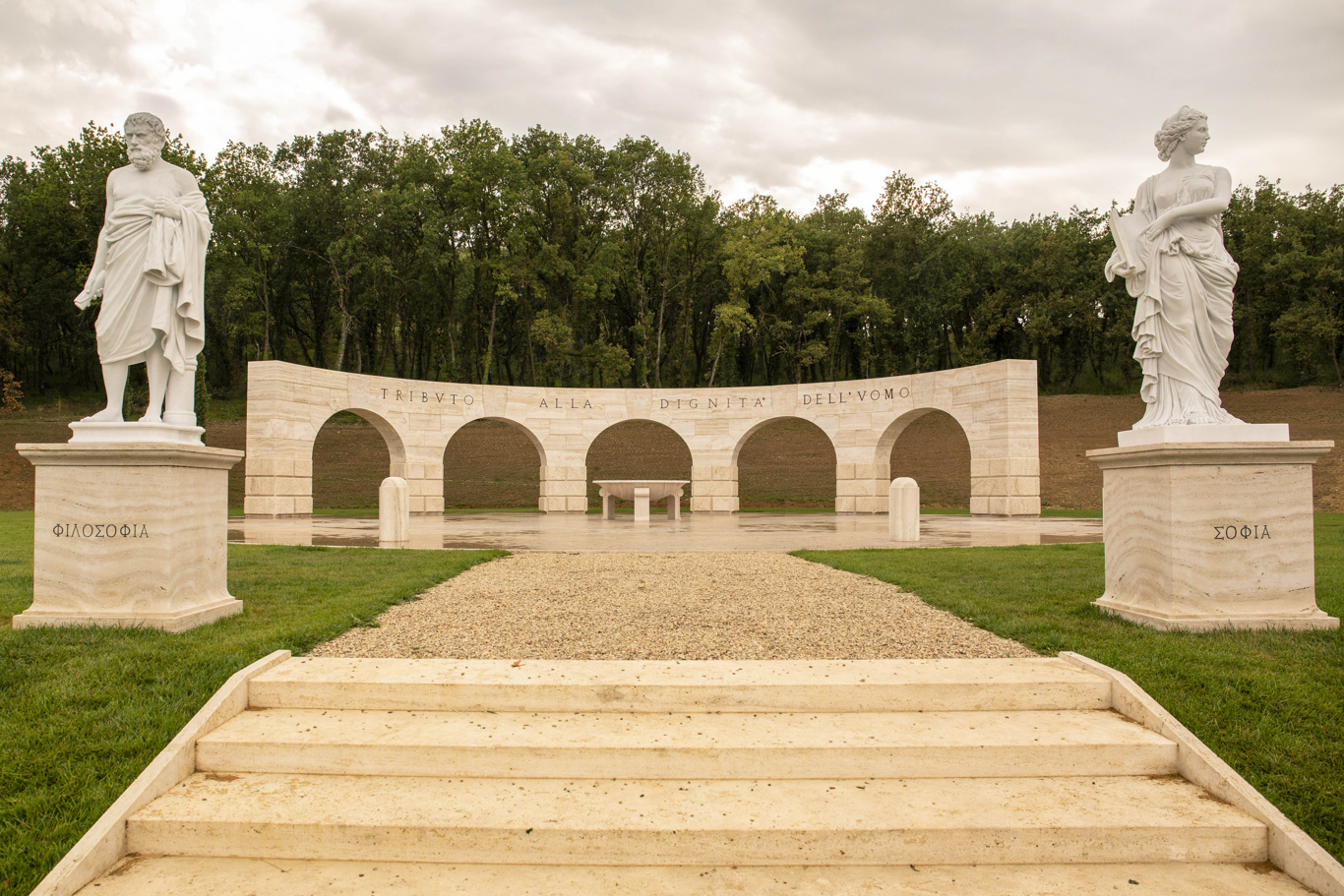 During a tour of the park, and pointing to the monument he erected, Cucinelli said he hoped it “could stand for 2,000 years.” The monument is a travertine exedra, about 5 meters high and 24 meters long, incorporating a tripod in the center and with five arches, above which bold bronze letters spell out the words: “Tribute to Human Dignity.” To express the universal nature of the structure, the names of the world’s major five continents are listed, one under each arch, also in bronze: America, Europe, Africa, Asia and Oceania.

“Africa is situated beneath the central arch because that is where everything began,” said Cucinelli about the origins of mankind. To ensure its preservation for centuries, the monument was built following ancient techniques, starting from the instructions of Vitruvius, Palladio, and Sebastiano Serlio and complying with the canons and proportions of classical architecture. “It’s the same concept of the Colosseum,” he said, walking through the park, which is open to the public. 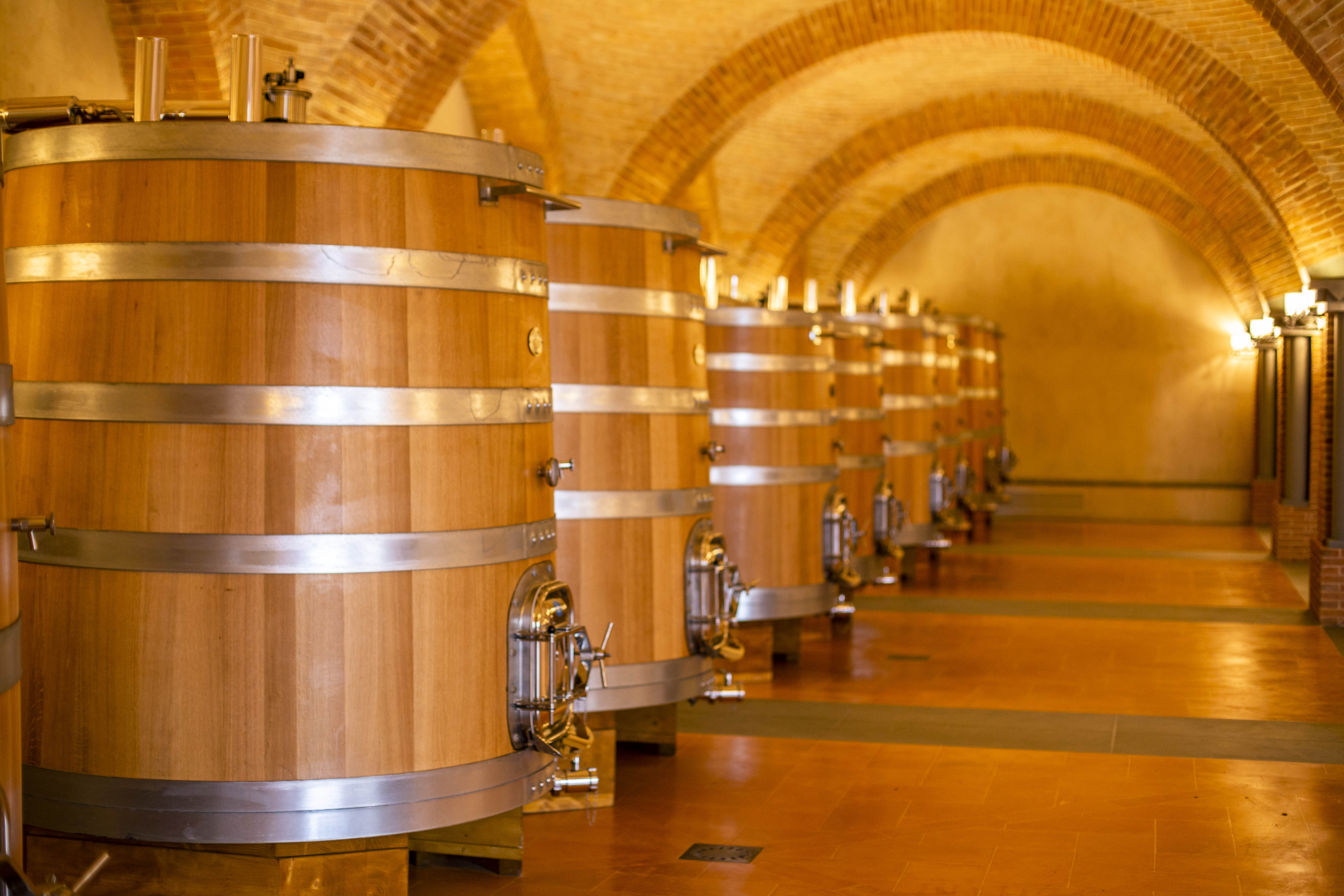 Nearby, Cucinelli set up the Cantina, or wine cellar, with a statue of Bacchus placed at the entrance and visible from the hamlet. “In his beautiful ‘Natural History,’ Pliny the Elder wrote that the grapevine is the symbol of work, the nobility of cultivation, and worship. The wine cellar is the temple that I dreamt of dedicating to Mother Earth,” said Cucinelli.

His first bottles of sangiovese, merlot and cabernet wine will be ready this year. This is a way of renewing the area’s old manufacturing tradition, he said.

Spirituality is so evident in Solomeo, Cucinelli said, that he decided to call the town the “Hamlet of the Spirit.” 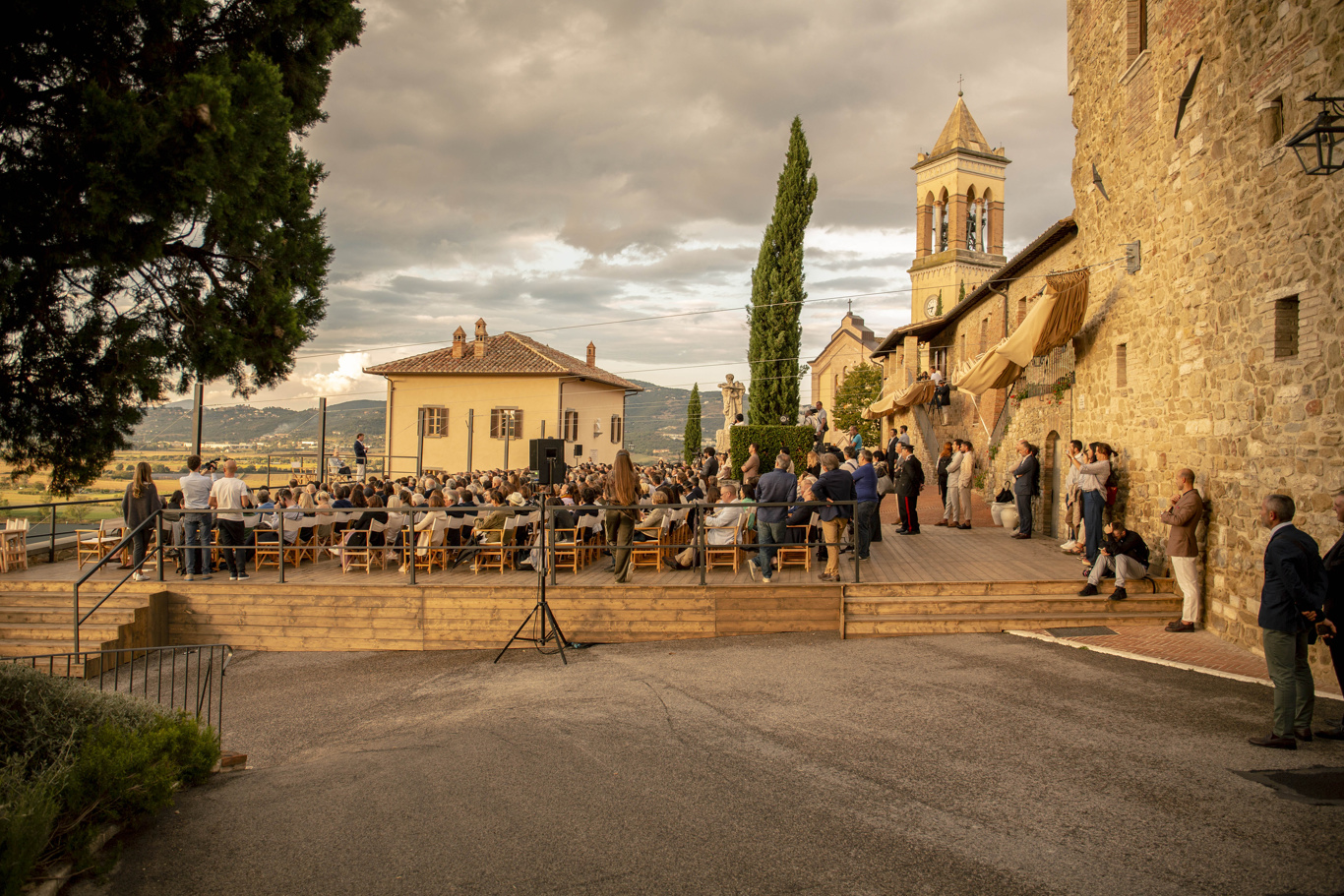 Cucinelli said he’s always believed in the idea of a “contemporary humanistic capitalism, and to work and live in a hamlet is a gracious way of expressing this aspiration.” He spoke of “a fair balance” that “must always be given between profit and giving back,” and said that he was once told that working in a village could not be compatible with the speed of modern life. His company, he believes, is a testament to the contrary.

“Italy is full of hamlets, why can’t we work in them? We are all connected.” 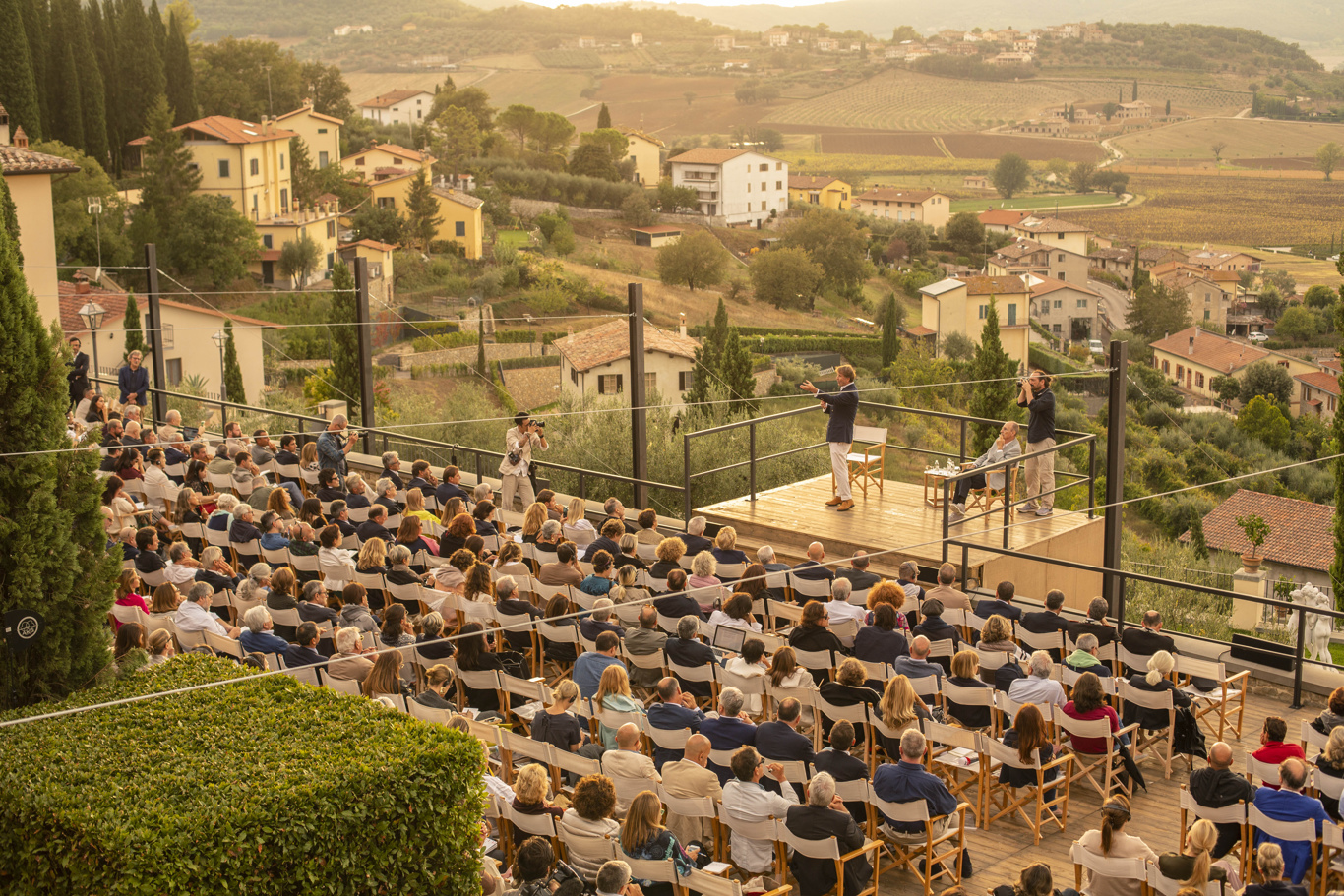 This connection, however, must be limited, as Cucinelli reiterated his desire to minimize “the digital noise,” and said he was going to meet Amazon chief Jeff Bezos soon to discuss “humanizing the Web,” a priority for Cucinelli.

“Perhaps, in the future, true luxury will be the ability to lead a private life unknown to our life partner — our smartphone,” he said.