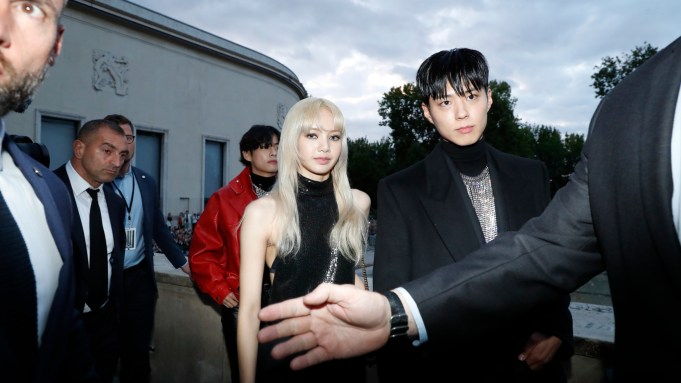 Hedi Slimane always draws a star-studded, rock ‘n’ roll crowd. On Sunday night, he closed fashion week with two of the biggest K-pop stars in the world with Blackpink’s Lisa and BTS’ Kim Taehyung, aka V, sitting front row at his Celine show, along with one of South Korea’s most popular actors, Park Bo-gum.

It was the first public appearance of V since the seven-member band announced on June 14 that it is going on “hiatus,” and fans turned out en masse to get a glimpse of the superstar. Avenue de New York leading to the show venue at Palais de Tokyo was mobbed by thousands of devotees screaming and shouting fan chants.

When the two emerged from the top steps to wave to the crowd, a roar went up that was so deafening even LVMH Moët Hennessy Louis Vuitton chairman and chief executive officer Bernard Arnault and LVMH Fashion Group CEO Sidney Toledano walked outside to take video as they marveled at the energy.

Many of the more staid guests were in awe. “Insane, absolutely insane,” said Eddie Redmayne, though he is clued in to the K-pop world. “I mean, I listen to it. I think they’re brilliant. I worked with a wonderful Korean actress named Claudia Kim who gave me a little bit of an introduction,” he said, and praised Korean fans for their passion.

“I don’t understand. What are they doing here?” asked Thomas Brodie-Sangster. “It’s mad out there.” When the “Queen’s Gambit” star heard that K-pop stars were causing the commotion, he said he’s been to South Korea before and finds the fashion really cool. He also praised Slimane’s sleek silhouette and his work as a photographer.

“He’s methodical. He played one song on a loop over and over,” said Brodie-Sangster, reminiscing about a shoot the two did years ago. It’s the same style Slimane used for Sunday’s show. An original song by Gustaf played on repeat with the lyrics “You feel yourself and nothing else,” and “People get used to terrible things.”

Jeremy Scott made a rare appearance in the front row to support his longtime friend, whom he has known since 1997, he said. “I’m used to being tucked away and having no idea about the pandemonium outside,” said the Moschino designer of the crowds outside. “I was just saying how overwhelming it was to get out of the car. Seeing so many people, yeah, I got a touch of anxiety.”

But hearing that the room was waiting for the K-pop stars, he noted that he is a longtime fan. “I actually was part of the early wave of K-pop because I kinda broke 2ne1 into the U.S., so actually I was a pioneer if I want to be honest,” he said of the girl group that was active in the mid-2010s and that just reunited for a set at Coachella.

“I was doing so much with them,” he added. “I believe in the power of K-pop.”

The crowds were so dense outside that, in an extraordinary move, all guests were escorted through the backstage to exit. And there were still thousands more fans outside that door waiting for a glimpse of the Korean stars.